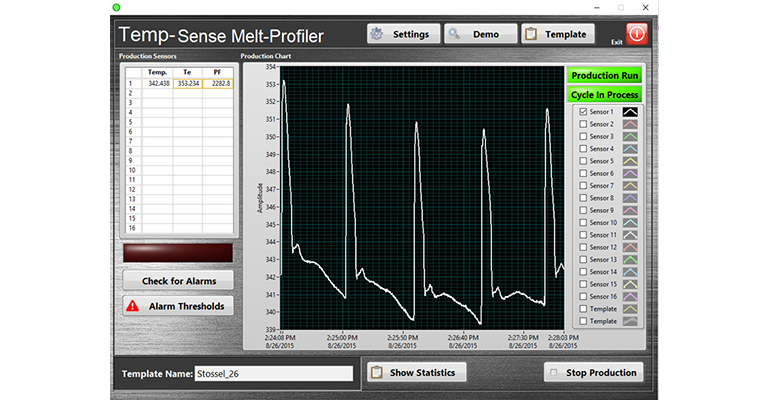 The Melt Profiler developed by Md Plastics alerts molders to the state of the melt before it is injected into the cavity, giving them a much better chance of molding quality parts in a consistent manner.

Durina realized that one of the most important variables in the injection molding process was not being collected — the temperature of the melt inside the barrel. Variances in melt temperature cause variances in viscosity, which can lead to “wild fluctuations” in part weights and injection pressure needed to reach the V-P switch point, Durina explained. The end result is an unstable process and inconsistent part quality. That fact led Durina to develop his company’s trademark Melt Profiler, a system that measures the thermal “work” done to polymers at a rate of 157 times per second and calculates key metrics to distinguish good from bad parts.

While it took Durina several years to develop the Melt Profiler, it’s taken even longer to get the industry to sit up and take notice. “People have been trying to measure melt temperature since the 1980s,” said Durina in an interview with PlasticsToday. “We picked up the ball about six years ago and spent countless hours trying to design and manufacture a sensor that could withstand not only the pressures and temperatures, but also generate an accurate signal. After a lot of trial and error, we finally did it.”

Seeing straight into the barrel

“The beauty of this technology is that it allows you to see into the barrel for the first time with a high-quality graphical display that we turn into digital data to calculate our math models,” said Durina. “Being able to know the state of the melt before injecting it into the cavity gives molders a much better chance of molding quality parts in a consistent manner.” But the Melt Profiler does more than that. It also gives molders crucial information about what happens during injection. For instance, non-return valve slippages are glaringly obvious. This is critical because a robust process requires non-return valves (NRVs) to function properly.

“Preparing high-quality melt is of paramount importance,” said Durina. “We’re adding value by allowing the molder to see how well the machine is preparing and dispensing the melt, which is a whole different world from what others bring to the marketplace, since our core competency has been designing screws and NRVs.”

Dave Martzall, VP and General Manager for Plastic Molding Manufacturing (PMM), told PlasticsToday that the company installed a Melt Profiler onto a press that molds a high-tolerance part for an electronic assembly. “Plant Manager John Olney was more than just a bit skeptical,” said Martzall. “But after using it, he became a real believer. In fact, the team at Olney’s plant in South Bend, IN, has it dialed in so well that it’s catching not only short shots, but also sink marks that would be almost impossible to catch with the naked eye.” Olney was so impressed by the effectiveness of the Melt Profiler that he gave Md Plastics a video testimonial.

“We’re very grateful that Plastic Molding Manufacturing went public with its Melt Profiler experience. Most companies wouldn’t have allowed that. It shows their commitment to investigating and trying new technologies to move forward not only their company but the industry as a whole,” said Durina. “They’re an exceptional company that does right by its customers.”

'This technology has been needed for a long time'

Martzall explained that typical molding machines don’t know when they make bad parts. “You can set the limits as tight as you want, but it’s impossible to guarantee that good parts were made­ — there are just too many variables at play,” he said. “What’s so special about the Melt Profiler is that it takes all those variables into account and tells you that your melt temperature — and, therefore, your viscosity — is where it needs to be. And if it’s not, an alarm goes off. When that happens, our conveyor reverses and removes those parts from the value chain.

“You’re monitoring the melt temperature every shot and that’s one of the most critical things you can do in molding,” Martzall continued. “This gives you the actual temperature of the melt at the nozzle, which provides very different information than a cavity sensor. The Melt Profiler lets you know if you are degrading your material before it gets into the cavity.”

PMM is running 4-, 8-, and 16-cavity molds with conventional runner systems. Part weights range from 7.3 and 10.48 to 325 grams. The quality problems PMM was encountering involved having to sort parts for both short shots and flash or even dimensional issues. “All this went away since we’ve been using the Melt Profiler,” said Martzall. “All our issues stopped and we can see how repeatable our process is from shot to shot.”

Durina said the base system includes a hopper sensor that allows molders to know if their material has been prepared correctly before sending it down the hopper. “It can detect small changes, such as whether the material is as dry as you think it is,” he explained. “The next time you run the part you can alarm the system to see if anything has changed in the material.”

Martzall said the goal of PMM is to exceed customer expectations. PMM’s automotive customers are especially appreciative of the data harnessed by the Melt Profiler system. “We can print out the shot-to-shot data and see a pattern,” he said. “When you print out the data and see a repeatable process that’s stable with consistent parts, the customers are assured of high-quality parts that meet spec. Knowing what your melt temperature is for every shot is everything!”