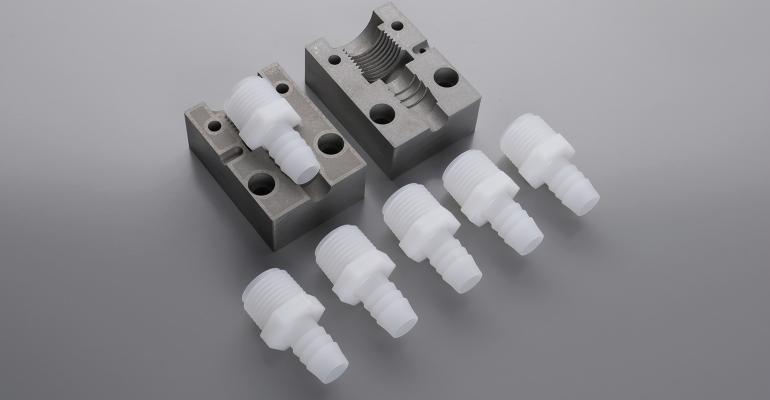 Using its patented TrueShape technology, Mantle’s flagship products, the P-200 printer and F-200 furnace, have already cut tooling lead times and costs by more than 50%, the company said. Toolmakers who have installed beta systems include Tessy Plastics, Nicolet Plastics, Fathom Manufacturing, and Westminster Tool. The first full production systems are slated for delivery in the first half of 2023.

The P-200 printer, with a build volume of 200 x 200 x 150 mm, is produced on a CNC platform that combines printing and machining for superior accuracy and surface finish. The F-200 furnace sinters parts and can support multiple printers.

The system employs Mantle’s H13 and P2X tool steels, which perform like traditional materials in secondary operations such as machining, polishing, coating, and laser welding. Tool paths and machine instructions are automated with the system’s easy-to-use software.

Several case studies illustrate how the Mantle system has delivered:

The simplified toolmaking system comes at a critical time for the $265-billion molded parts market, asserted one expert.

“There is a massive skills gap in the injection mold-making industry,” said Hillary Thomas, Westminster Tool Vice President. “Mantle’s technology is so intuitive that, with minimal training, we can have someone quickly operating and running this machine. Mantle will help Westminster Tool change how we do business.”

Mantle is exhibiting its technology at booth 433136 at this year’s IMTS show in Chicago from Sept. 12 to 17.

What Manufacturing Day Means for the Plastics Industry
Oct 04, 2022