You thought you had it bad when the country went on lock down — consider the plight of Rattus norvegicus, one of many aliases of the common brown rat. As restaurants shut down across the country because of the pandemic, rodents were suddenly deprived of one of their primary food sources. With no food waste to be found in restaurant dumpsters, rats and their ilk started migrating into neighborhoods looking for sustenance. That has been a boon for Bell Laboratories. The molder of rodent control products has seen sales soar 20% in the past year as homeowners and renters battled the four-legged invaders. To satisfy increased demand for its rodent bait stations, mechanical traps, and other population control devices, Bell Labs turned to automation and, notably, sought guidance from Wittmann Battenfeld to help it better automate its molding processes.

Bell Labs runs 26 injection molding machines ranging in size from 110 to 600 tons at its facilities in Madison and Windsor, WI. Most of the products are molded with recycled polypropylene or polystyrene. Bell Labs purchased its first Wittmann automation product — a sprue picker — in 2014. It now has 15 Wittmann robots, and is looking to purchase more.

“When we started with Wittmann, we thought a sprue picker would be all we needed,” said Jim Walsh, Designer and Injection Molding Process Engineer.  “We used it on a couple of our single-cavity cold runner molds, and while it did solve some of our part removal and placement issues, we realized fairly quickly that we needed more sophisticated robots to work with our multi-cavity hot runner molds.”

After switching from sprue pickers to Wittmann robots, the company said it saw dramatic improvements. “We were having issues with parts sticking in the molds and not dropping out at ejection,” said Walsh. “Also, we were seeing parts breaking at the living hinges when dropped onto conveyors. The robots have solved these problems, and more.”

Besides improving cycle times thanks to efficient part removal, the robots have saved on tool wear, according to Wittmann Battenfeld.

The robots also now stack and close small mouse bait stations, which used to be done manually, and count parts as they are dropped into totes.

Bell Labs’ newest Wittmann acquisition is a W833 robot that runs on a large 560-ton machine. It features a telescoping Y axis, which allows clearance of the overhead crane that is positioned on the ceiling above the machine.

Next: Cobot bulks up, takes on heavier payloads 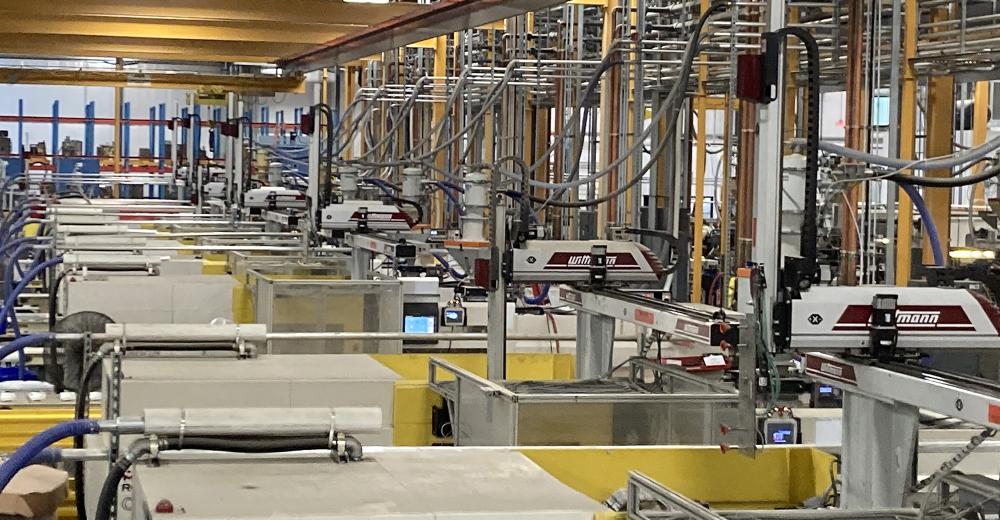 Next Up
Building Better Latch Locks, and Other News from the Plastics Supply Chain
Start Slideshow ›