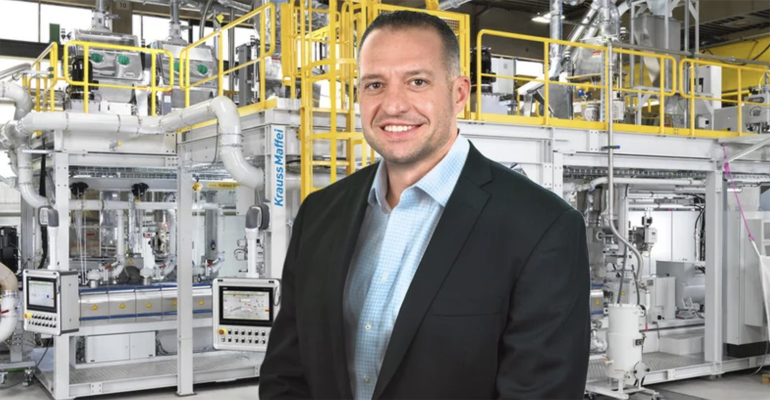 Strall previously served as Vice President of Operations and Digital & Service Solutions (DSS) for KMC. In this role, he was responsible for aligning the New Machines & DSS teams and processes to ensure maximum efficiency and profitability for the organization, said the news release. In his new role, he will remain a member of the Digital & Service Solutions global management team.

Strall holds a bachelor's degree in industrial technology engineering with a focus on manufacturing information systems technology and a minor in business administration from Ohio University. Prior to joining KMC, he held positions in the aerospace and general industrial machine tool market. Prior to that, he spent eight years with Siemens Industry in a variety of leading positions at multiple locations.

"KraussMaffei looks back on more than 180 years of innovation and technology history, which led me to join the US team at KraussMaffei Corp. in January 2020,” said Strall. “In what has been a very difficult year for the industry and one of the largest organizational changes in the company's history, I found at KraussMaffei Corp. an amazing group of dedicated employees that we have now galvanized as one strong team for the future. The team we are building here in Florence, KY, has a deep knowledge of our core technologies. We also have added key leaders and started initiatives in complementary technologies that will provide new solutions for our customers and enable us to enter new markets," said Strall.

"As part of his role as president, Nolan will continue our journey to further strengthen our organization in North America, drive localization of industrial automation solutions in line with our global strategy, and ultimately expand KraussMaffei's solutions portfolio to support our core and new markets,” said Nilles.

KraussMaffei produces machinery and systems for the production and processing of plastics and rubber, including injection molding equipment, extrusion technology, and reaction process machinery. In April 2016, the Chinese state-owned company China National Chemical Corp. Ltd. (ChemChina), one of the leading chemical companies in China, became the majority shareholder of KraussMaffei Group. At the end of 2018, ChemChina listed the KraussMaffei Group as KraussMaffei Company Ltd. in Shanghai. The listing opened up access to the Chinese capital market and local investors.