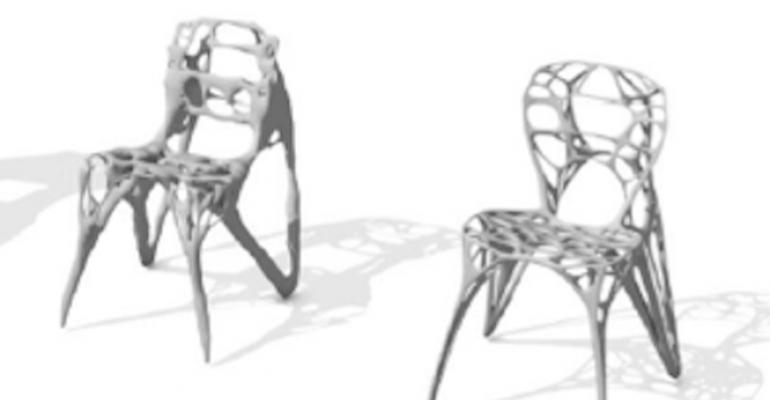 As more companies turn to engineering thermoplastics to access high-performance material properties at lower cost, finite element analysis tools increasingly are called upon to assist in efficient part design. Importantly, the use of a coupled engineering process between mold-filling simulation, non-linear structural analysis and advanced optimization tools is providing answers for discrete manufacturers in search of solutions.

With many of today’s engineering thermoplastics, simplified isotropic representations of material properties have limited accuracy in the prediction of structural performance. The use of more advanced material models, as well as a product development workflow that accurately captures the “as-molded” condition of a structural injection molded part, are keys to high-performance product design. The “as-molded” condition can and often does significantly change injection molded part behavior; capturing this behavior is key to robust analytical predictions.

This paper outlines and discusses a computer-assisted engineering (CAE) centered product design workflow that successfully integrates material testing at the coupon level and injection molding simulation, and subsequently imports these as-molded simulation results directly into a finite element solver for high-fidelity performance predictions and, ultimately, into optimization software that can help determine optimal topological feature construction for the best performance at the lowest cost.

CAE-centered product design workflow described in this paper is based on a close interaction of the mold filling (MF) and finite element analysis (FEA) simulations. Results of MF simulations such as shrinkage, warpage and residual stresses act as inputs to the FEA simulations. Therefore, the accuracy of the FEA simulation is a function of the MF simulation results, which are governed by the rheological, pressure-specific volume-temperature (PVT) and thermal properties of the thermoplastic resin. As such, the properties of the simulated material have a direct effect on final part performance as predicted by FEA simulations. Hence, they are a crucial element of the CAE workflow.

Figure 1 shows the set of properties for a typical thermoplastic material that are needed to perform an MF simulation. Complex flow behavior of thermoplastics is characterized by the viscosity vs shear rate curves as obtained by means of a capillary rheometer. PVT curves are the backbone of the MF simulation, as they govern the state of the thermoplastic for a given temperature and pressure combination. Thermal properties such as thermal conductivity and specific heat govern the overall heat transfer between the melt front and the mold base.

These properties must be available for multiple temperatures, which are relevant to the processing conditions of the subject thermoplastic material. For common materials, these properties are available in the simulation software (Moldex 3D, for example) database. However, for customized proprietary materials these properties can be easily tested for a relatively low cost to gain maximum accuracy in MF simulation results.

In addition to the aforementioned properties, standard datasheet properties such as coefficient of linear thermal expansion (CLTE) and Young’s modulus are needed to perform the MF simulation. If unavailable, these properties can be tested as well, along with the other properties. As such, obtaining the desired material properties is the first and most important step in the proposed part design workflow.

The second step in the workflow is to perform the MF simulation on a given thermoplastic part using the material properties previously obtained. MF simulation can be performed using commercial tools with the capability of simulating the various phases in the injection molding process, such as injection, packing, cooling and warpage. Commercial tools do offer standardized templates that can be used to quickly set up an MF simulation. However, several factors influence the final results, and the analyst must consider the following points before accepting the results from a simulation run:

Injection molding process simulation that is set up with a careful choice of the aforementioned parameters usually yields accurate results. The most common results include shear rates, melt front temperatures, gate freeze and sink mark predictions, weld lines, fiber orientations, cooling rates, volumetric shrinkage, warpage and residual stresses. These results should be used to optimize the process to achieve desired part quality. Also, as we will discuss in the following sections, these results are used to run structural analysis on “as-molded” parts.

A brief review of the treatment of common molding defects is presented here before moving on to the third step in the design workflow—structural analysis.

One of the most common cosmetic defects in injection molded parts is the presence of sink marks. Sink marks occur when the part has non-uniform thickness distribution and/or more than the recommended thickness for a given material. They can also be an artifact of insufficient packing, or premature gate freeze during the packing phase. An accurate MF simulation will indicate possible sink-mark locations. Process and design modifications should be performed to eliminate or reduce sink marks using the MF simulation.

Another critical factor to watch for in MF simulation results is the shear rates: They are higher at the gate location, where material is pushed through a small opening into the cavity. Shear rates that are higher than the recommended limit for a material can lead to damage of the thermoplastic at the micro level, reducing its mechanical strength. As such, overall part strength and quality are degraded. This effect is even worse for fiber-filled materials, as the higher shear rates break down the fibers, leading to significantly lower strengths. MF simulation is again very helpful in predicting shear rates and avoiding harmful shear rates.

Weld lines are most critical when it comes to the structural performance of the thermoplastic part. Weld lines are produced by colliding flow fronts, influenced by part geometry and gating locations. It is ideal to eliminate all the weld lines in the part, or push them to a region of the part that is not structurally critical. However, this is not always possible because of part design and geometrical constraints. As such, it is necessary to account for weld line effects in the structural analysis, and predict the part performance accordingly. Mechanical properties at the weld line are a function of flow-front temperatures and flow-intersection angles. These variables can be extracted from the MF simulation and used to mold a weld-line coupon to perform a tensile test. Figure 2 shows a difference between the tensile stress-strain curves of a typical thermoplastic material, with and without the weld-line presence. It is evident that because of the weld line, there is a significant reduction in tensile properties of the material. If multiple weld lines are present with different mating angles, properties can be interpolated based on the tested properties. This information is then transferred to an FEA model in the form of reduced strength and stiffness of elements at weld line location via a mapping algorithm. This leads to realistic predictions of part performance during structural analysis.

In this way, MF simulation should be used to optimize the injection molding process, minimize defects and improve part quality. Only a few crucial defects are discussed in this paper; MF simulation is helpful in predicting many more such defects.

The third step in design workflow is to perform structural analysis on “as-molded” thermoplastic parts. Experienced analysts have determined that process effects such as residual stresses, warpage-induced deformations and defects such as weld lines can affect structural part performance significantly. It is common practice to ignore these process effects, and to analyze the part without consideration of these potentially deleterious effects. However, field results can show a failure in the operating conditions caused by unanticipated process residuals. As such, it is very important to account for process residuals in the structural analysis.

For unfilled materials, because of the isotropic constitutive response, stiffness mapping is usually not required unless weld lines are present. In that case, as mentioned in the previous section, additional data from the weld line coupon tests are used to topographically map the reduced stiffness on to an FEA mesh. For fiber-filled materials, the mapping is needed to capture the inherent anisotropic nature of the mechanical and thermal properties in the part. MF simulation is used to predict the fiber orientations throughout the part. To correlate this with anisotropic properties, additional coupon-level tests are performed in fiber and cross-fiber directions to determine the stress-strain response in those directions and the CLTE measurements. Fiber orientations along with test data are then used by a micromechanics algorithm to generate orthotropic elasticity tensors throughout the part. These tensors are then mapped to the FEA mesh to perform the structural analysis.

Once the mapping for process residuals and stiffness is completed on an FEA mesh, structural analysis can be performed as per the design/service requirements for the part. The most common type of analysis performed on thermoplastic components is the quasi-static analysis, where the stress-strain and deflections for the part under service load are predicted, and changes, if necessary, are made to the design. In addition, all classes of thermoplastics are prone to creep/visco-elastic relaxations even at lower temperatures, unlike metals, where creep effects are prominent at elevated temperatures. As such, it is necessary to understand the long-term effects of the part-loading conditions. By performing low-cost creep tests, visco-elastic properties of the thermoplastic materials are measured and used in FEA simulations to predict the shelf life or service behavior of the part. These creep simulations give vital insights to designers and can support the findings of the accelerated aging tests typically carried out to evaluate long-term performance. Process induced residual stresses tend to relax due to visco-elastic behavior of the polymers. Creep analysis can simulate these effects, as well. For time-varying loads, net stress-strain distribution can be calculated by considering the process induced residual stresses. This distribution can then be used to predict fatigue performance of the part.

If the material is deformed plastically because of operating loads, or if there is interest in predicting the failure loads for the part, then a non-linear structural analysis can be performed with process residuals acting as initial conditions. For unfilled materials, such analysis is a straightforward process. However, for fiber-filled materials, micromechanic-based tools, such as Digimat, are used in conjunction with standard commercial FEA software to predict non-linear material response as a function of fiber orientation.

Structural analysis performed using molding process residuals has a very high fidelity. It is useful to make any necessary design changes to the thermoplastic parts based on realistic predictions. The redesigned parts are then run through the design workflow to make sure that optimized process parameters are still relevant and part quality is maintained. This integrated approach leads to an improved design in a short amount of time without having to build prototypes.

Three steps in the design workflow are sufficient for most applications to produce a better design with high fidelity. However, stringent requirements on part weight and performance can be satisfied using a faster, mathematical approach called topology optimization, which yields an optimized low-cost design.

In this way, topology optimization can be used to solve the high-performance, low-cost design problem in a short amount of time by adhering to injection molding process constraints. It is recommended to integrate such optimization in design workflow to minimize the product design cycle time.

This paper focuses on a three-step, CAE-centered design workflow along with a design optimization module that looks to implement a process-driven design and analysis methodology. Many current methods tend to ignore process effects in the analysis, which can lead to erroneous performance predictions and, thus, part failures. The methods detailed in this article seek to correct these errors by incorporating the injection molding process effects in the structural analysis and, thus, predict realistic performance outputs. Overall, the presented methodology is a low-cost and faster approach to high-performance design.