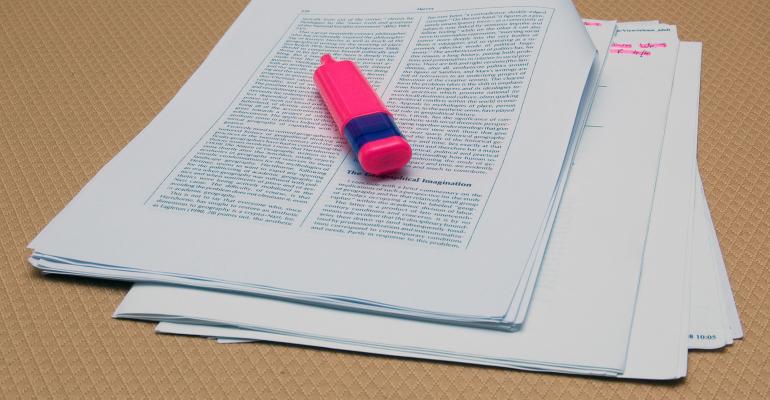 Some parts of the nearly 25-year-old guide are outdated, such as the pre-internet recommendation that initial contact between the purchaser and seller of a mold should be “in person whenever possible.”

Customs and Practices of the Moldmaking Industry has been the official guide for the classification of injection molds for thermoplastic materials since the early 1980s, when the Moldmakers Division of what was then the Society of the Plastics Industry issued the guide. The 21-page document, which describes best practices for procuring prototype and production tooling, was last revised in 1996. The trade group is now called the Plastics Industry Association (PLASTICS), and the document is currently undergoing review for updates.

The guide is aimed at avoiding misunderstandings and conflicts by all parties involved in the mold procurement process. While common practices are often followed, mold buyers may specify many unique requirements and preferences, and the guide is a starting point to safeguard from any potential disputes and differences of opinion.

The manual addresses topics such as listing classifications of molds, mold data sheets, making payments, receiving progress reports, and arranging a mold’s delivery. However, many sections are outdated, such as the section in Inquires and Quotations that suggests initial contact between the purchaser and seller (moldmaker) should be “in person whenever possible.” Since the advent of the internet, many initial contacts are made via secure links between the two parties. That is how many companies provide the initial print reviews and basic quotations. The manual I have is a 1994 edition, shown in the photo.

The Classification of Injection Molds is a section that is still being used by many mold purchasers when getting quotes, and continues to be helpful.

"The original content won't be scrapped, as we decided not to start with a clean sheet of paper,” said Glenn Starkey, who currently chairs the moldmakers division of the PLASTICS’ Committee on Equipment Statistics. “People still work off this document, and we didn’t feel it would be good for it to disappear. Instead, we’re taking a fresh look at it, and the work of the task force primarily will involve heavy editing and updating," said Starkey, President of Progressive Components, which sells components and monitoring systems for moldmaking and molding. He currently chairs the task force that is revising the guide, along with Toby Bral of MSI Mold Builders and Wally and Camille Sackett of Accede Mold & Tool.

Starkey mentions that a lot of the information in the guide has become part of the industry vernacular, especially regarding various classifications of molds and their cycle capabilities and price ranges. But some terms aren't relevant today, such as references to NC (numerical control) tape, mylars, hobs, and mandrels.

"Somebody in the mold business might get a chuckle remembering some of these terms from 30 years ago," Starkey said. "There are also references to forms and how pink carbon copies are filed for internal use. We will update that to an electronic form."

Practices for mold payments, mold qualification, and warranties on mold performance are being reviewed. The revised guidelines also will have an updated mold data sheet, which serves as a checklist of the mold buyer’s needs and is used for quotations, and a progress report template for providing status during the various mold-building stages.

The task force started meeting in September. Currently, the group meets every three weeks to review the guide with Jennifer Jones, Director of Industry Standards for the Washington DC-based plastics industry association.

“We’re each taking sections depending on our own specialties and revising those sections and bouncing it off each other,” Starkey said. “That’s the mode we’re in at this time.”

The initial draft will be ready to circulate to a consensus group once the task committee reviews the document’s structure and content. The consensus group consists of mold buyers and makers within PLASTICS.

This same committee also will reach out to members of the American Mold Builders Association and industry at large to seek input for the guide. With the new revisions integrated into the document, it will be issued, reviewed, and revised periodically.

While there isn't an exact target completion date for the guide, the group expects to seek industry feedback in early 2021. The task force also is reviewing the mold finish guides to improve communication between moldmakers and mold buyers.

“We’re getting the word out now that this has been kicked off,” said Starkey. “The new year will bring the need for input from industry stakeholders to assist the industry in the decades ahead.”