After 25 years in its South Gate, CA, facility, things got tough for ProMag, one of the world's largest producers of gun magazines and accessories. Several states, including California, have passed laws limiting the size of gun magazines, meaning that ProMag could no longer sell its own products in the state where they were manufactured.

In January 2014, ProMag packed up 150 tons of equipment, including metal stampers, benders and injection molding machines and tooling, loaded it onto 40-plus oversized trucks and headed to Arizona, where the business climate is friendlier. Unfortunately, said the company spokesperson during a plant tour given to PlasticsToday, 175 of the 200 employees lost their jobs—only 25 made the move to Phoenix with the company. Currently, ProMag employs 90 people in Phoenix. 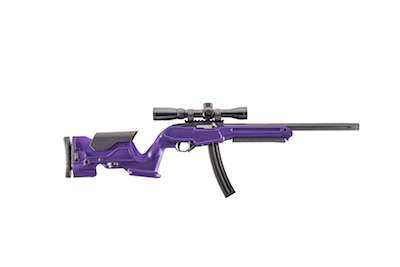 "Some of the employees had been with the company since its founding," said the spokesperson. "Some of the metal stamping and bending machines have very complex technology, and we lost a lot of the long-time expertise of the people that operated those machines, and had to find that talent in Phoenix."

ProMag, along with sister company Archangel, which specializes in stocks and accessories for most of the common brands of firearms, including Ruger, Springfield, Mossberg and Remington, now calls the 90,000-square-foot, three-building complex in Phoenix home. The company produces approximately 370 different products and while many of the magazines and accessories are metal, plastics play a big role in today's firearms manufacturing. Gun stocks that were commonly made from wood have made the transition to plastic. ProMag injection molds its stocks and grips from Zytel, which contains a proprietary blend of carbon and glass fiber. The Archangel line is all molded from this high-engineering thermoplastic for durability, greater rigidity for better accuracy and lighter weight, the spokesperson explained.

Gun aficionados, especially collectors of old-style military rifles such as the Mauser that was used in World War I, can purchase replacement stocks molded in ProMag's Technapolymer, the name the company uses for the proprietary Zytel material. Collectors will often replace the wood stocks with a Technapolymer stock to preserve the antique wood stock when they take the gun out for target practice, explained the spokesperson. The stocks come injection molded in many colors. The camouflage stocks are decorated using a hydrographic dipping technology.

ProMag operates five large-tonnage injection molding presses and does all of its molding in-house, from the large stock bodies to the smaller components that make up the complete stocks. Even some of the new magazine product lines are injection molded for the sport shooter.

The company has grown exponentially since its move to Phoenix, and more growth is in the company's future. "We have three large buildings that we purchased in this complex, but we're already getting crowded," said Promag's spokesperson. "We'll soon have to look for additional space."