While cleaning out a box of old clippings and meeting notices saved by a member of the Arizona section of the Society of Plastics Engineers (SPE) over a number of years, I came across an article that appeared in the Daily Progress dated Monday, April 28, 1975, titled "AHS installs plastic molder." The photo that accompanied the article, which you see here, showed Pixley Richards West employee Byron Bower setting up an injection molding machine in the industrial arts department of Arcadia High School under the watchful eye of the teacher of the class, Walter Tamasauckas. 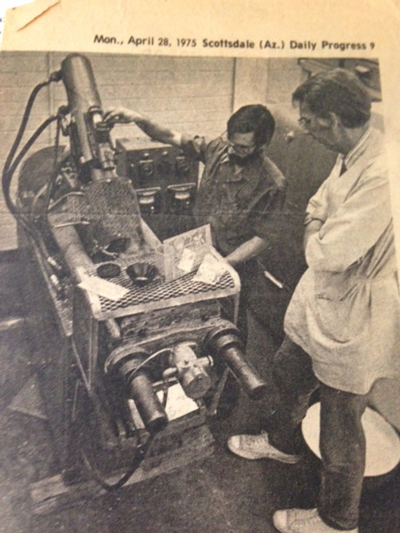 The machine, which appears to be a small-tonnage press of some type, was donated by a California plastics firm two years prior. The article doesn't mention the name of the firm that donated the machine nor why it sat idle for two years until it was set up for operation with the help of SPE and Pixley Richards West, a custom injection molder in Tempe, AZ.

Bower volunteered his services to get the machine up and running as a part of an industry-education cooperative venture at Arcadia High School, "since the machine is complex and needs a skilled hand to get it in operating order," Tamasauckas said.

Tamasauckas told the unnamed reporter that "the various plastic products that can be produced by the molder are unlimited. They can include plastic glasses, ash trays, even whiffle balls."

The machine was to be used "to acquaint Arcadia industrial arts students to the basics of plastic molding and enable them to be acquainted with just the type of molder used throughout the industry," Tamasauckas told the reporter.

History is interesting and none more so than that of the plastics industry. I've had the pleasure of meeting many of the early industry pioneers: Men like Richard (Dick) Landis, whose father founded Landis Plastics in the early 1950s; James Hemphill (now deceased), who in the early 1950s brought the first injection molding machine to Mississippi to mold bezels for RCA television sets; and many more. I even had the pleasure of helping Landis write the history of Landis Plastics, one of the most memorable experiences in my writing career.

What is interesting, too, is that 30 years ago they were teaching industrial arts, something that faded away in most high schools during the 1980s. Today, many schools are trying to revive those valuable classes. It's taken us a while, but we've learned the value in teaching the trades. We've also learned that college isn't for everyone and that manufacturing offers great career potential for those who want to put in the effort and learn how things are made.

By the time my children attended Arcadia High School as teenagers in the late 1980s and early 1990s, there wasn't much left of the industrial arts program. However, I was invited to give presentations on plastics for some science classes at the school, something I enjoyed doing because I believe, like Mr. McGuire in The Graduate, that plastics really is our future.