A tale of two molders in Mexico 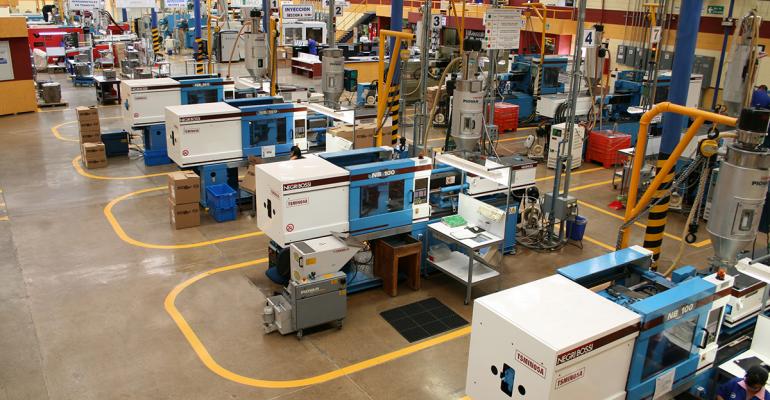 As Mexico's automotive and aerospace industries continue to see rapid growth, suppliers are encouraged to locate plants near these OEM and Tier 1 facilities to help reduce cost and time. Many OEMs have been manufacturing in Mexico for decades, bringing in parts and components  from suppliers in the United States and Canada. That is primarily because there has been a reluctance on the part of smaller, Tier 2 suppliers, such as molders and moldmakers, to site manufacturing plants in Mexico. But those who have gone there are seeing their growth pace in line with their customers.

As Mexico's automotive and aerospace industries continue to see rapid growth, suppliers are encouraged to locate plants near these OEM and Tier 1 facilities to help reduce cost and time. Many OEMs have been manufacturing in Mexico for decades, bringing in parts and components â€¨from suppliers in the United States and Canada. That is primarily because there has been a reluctance on the part of smaller, Tier 2 suppliers, such as molders and moldmakers, to site manufacturing plants in Mexico. But those who have gone there are seeing their growth pace in line with their customers.

GW Plastics has been in business â€¨since 1955. Headquartered in Bethel, VT, the company made the move to put molding in Queretaro, Mexico â€¨in 2006, a site that was strategically located to serve its customers throughout Mexico, according to Justino Barrientos, Mexico sales manager for GW. "Following our customers and expanding our footprint in Queretaro meant greater opportunities for us as a supplier," Barrientos said. "The cities on the border were our first targets, but it was not as centrally located, so we went to central Mexico instead. It's strategically located and allows us to reach most â€¨of the primary automotive facilities within three hours. For JIT automotive programs, it's ideal. Being close to our customers is key."

Barrientos commented that GW Queretaro is "at the top of the supplier pyramid" for its technical capabilities, which include the ability to mold complex, tight-tolerance, functional parts and to provide overmolding and a variety of secondary operations, specifically assembly. "We're looking forward to expanding our assembly capabilities to grow our business scope," added Barrientos. "The types of parts we supply include automotive electronics, electrical drives, panel systems, and other tight-tolerance components. We have many years of experience in manufacturing these parts."

While Mexico may be consideredâ€¨ a low-cost location, suppliers like GW have to have high-tech, state-of-the-â€¨art plants to meet the requirements of today's automotive OEMs. The 51,500 sq-ft plant is ISO 14001 and ISO/TS 16949 certified. Today, with 20 injection molding presses ranging from 50 to 650 tons, GW Queretaro serves some â€¨of the major global automotive Tier 1 suppliers that deliver final assemblies to OEMs including Honda, BMW, Audi, GM, Ford, Chrysler, VW, and more. "All these OEMs are expanding and opening new operations, and the Tier 1 suppliers are following them. We work with the Tier 1 [suppliers] to accommodate this increased business," said Barrientos. "We are growing organically and taking advantage of the location-investing in additional capacity to face these challenges."

According to Marcel Alvarez, director of sales for Mexico, when MGS acquired the facility in 2008, the customer base was primarily electronics, industrial, and appliance OEMs, with very little automotive. "In less than six years, revenues have increased from an average of $500,000 per month to the current $2.5 million per month, with the automotive industry responsible for approximately 40% of those sales," Alvarez told PlasticsToday. "Automotive is the fastest growing industry of our interests in Mexico." Sales for fiscal 2013 totaled $26.9 million.

MGS Plastics Chihuahua has obtained numerous certifications that include ISO 9001:2008, ISO/TS 16949- 2009 and ISO 14001:2004. Other investments include installation of new manufacturing systems and equipment, and personnel training, all of which has paid off in existing-customer retention and significant growth in new customer acquisitions.

As a testament to just how fast the automotive manufacturing industryâ€¨ has expanded in Mexico, in the last two years, MGS has been visited by automotive companies from Germany, Italy, Japan, Australia, South America, and the United States as they prepare for new platforms for their respective vehicle OEMs. "Several key prospective customers are currently discussing production opportunities for our facility," stated Alvarez. "MGS is also developing strategic alliances within our automotive customer base, and I can only see this trend increasing, as new announcements are made of new assembly plants moving into Mexico."

Because of the tremendous growth of the automotive industry in Mexico - both among OEMs and Tier 1 suppliers - GW and MGS sited their respective plants in strategic locations.

GW's Barientos sees close proximity to the automotive companies asâ€¨ one more advantage over some of the European Tier 1 or Tier 2 suppliers. "The automotive companies have very challenging [delivery] targets, and moving parts from Europe means they bring all these parts in by ship and rail every day," Barrientos explained. "If something goes wrong or if a shipment needs to be replaced, then you are talking about air-freighting parts," he says. Everyone strives for perfection, Barrientos adds, "but sometimes that isâ€¨ not the case, so it's ideal to be close to the customer so that if something goes wrong, we can ship parts in a few hours by truck."

MGS's Alvarez agrees. "The delivery expectations and quality standards of the auto industry are high, so it is imperative that the production team is well trained and supported," he said. "Our Chihuahua team has responded successfully. On April 8 of 2014, the employees of MGS Chihuahua received the Delphi Automotive 2013 Pinnacle Award for Supplier Excellence. Delphi is a long-time MGS customer, going back well before the Mexico acquisition. Their production management and quality teams worked very closely with ours to develop the systems and procedures needed by Delphi."