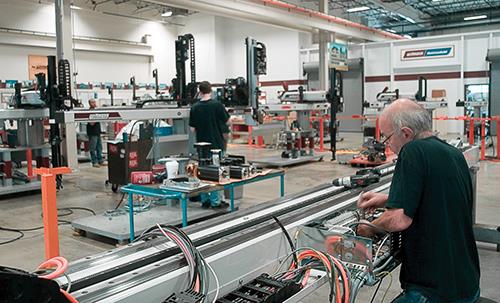 The first stage of development, which enables an overall capacity output of 4,200 robots a year, was completed in mid-May 2015. This entailed increasing capacity for assembly and startup of the small components that primarily are used to make the W808 and W818 robot models. These versatile robots can handle a payload up to 13 pounds, according to Wittmann's information.

The second stage involves overall enlargement of robotics production at the Wittmann Group's Vienna headquarters. This work is planned for completion by January 2016. The increase in Viennese production will be matched by an increase in production capacity at the company's assembly facility in Torrington. Upgrades at the U.S. facility will include an investment of more than $1 million in a large machining center and paint booth, which is estimated to get underway by the end of 2016.

"Market share from a robotics perspective in the plastics industry is up tremendously," Sonny Morneault, Vice President of Sales for Wittmann, told PlasticsToday. "We're on pace this year to get to $150 million just in Cartesian robots for the plastics industry, breaking all previous records. Our global goal at Wittmann is to get to an overall annual production output of 4,500 robots."

Wittmann has been aggressive in its pursuit of innovation and new product development. One example is the company's new W8 Pro robots, which were enhanced with new end-of-arm tool driven axes shortly after the robots were introduced. The new servo modules for the robots have an ergonomic and space-saving design.

Morneault added that Wittmann is one of the bigger players to offer turnkey solutions, noting that it provides integration of the robots at its facility. "Our control platform is such that we can run upstream and downstream to our controller," he said. "That makes it easy for the molder. Integrating multiple pieces of equipment in their facilities means they have their own PLC. With our robotic system they don't need that—all inputs and outputs are handled by our interface."