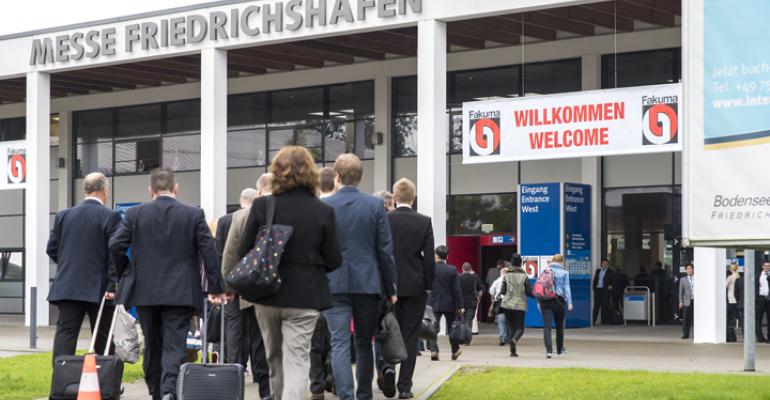 On paper, Fakuma shouldn't work. Friedrichshafen, Germany, and environs, which include nearby Switzerland and Austria, is a lovely spot for a relaxing three-day weekend, but an international plastics trade show?

Situated on the northern shore of Lake Constance, with Austria a short trek east and Switzerland due south, Friedrichshafen is surrounded by a beguiling tapestry of apple orchards and picturesque villages. It has earned a historical footnote as the place where Ferdinand von Zeppelin built his dirigible factory at the end of the 19th century. The Zeppelin Museum recounts the rise and fall, if you'll pardon the expression, of this erstwhile form of air travel. Like all German cities of a certain size, Friedrichshafen has a messe (the English equivalent of convention center does not do justice to these sprawling spaces), but Düsseldorf, Hannover or Stuttgart, this is not.

Hotel rooms in town fill up well in advance of Fakuma, so exhibitors and visitors scatter throughout the countryside in a radius of several miles to find lodging. Again, these gasthouses can be quite charming, but not what one might classify as accommodations for the well-heeled business traveller.

Getting to and from the show can be an hours-long ordeal. The word Stau, German for congestion, will become part of the show visitor's vocabulary along with Grüss Gott and Prost.

And yet, not only has Fakuma survived for 30 years and 23 shows—it goes dark on K years—it continues to thrive. Fakuma 2014 was a record-breaking year, with nearly 1800 exhibitors and 46,000 visitors from 117 countries. This year's show has been sold out since February 2015 and looks set to equal, if not surpass, that record. 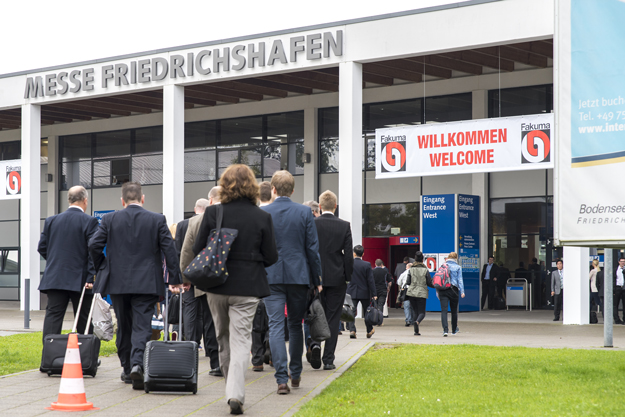 As these numbers attest, Fakuma is not a small, regional show by any means, but compared with industry behemoths K and NPE, it is a more intimate affair—more conducive to conducting business. And that's one of the things many people like about it.

"At K, Chinaplas and NPE, it is about showing off our products and demonstrating our commitment to innovation," says Konrad Hellmann, Sabic Country Leader, Germany, for the company headquartered in Riyadh, Saudi Arabia. "Fakuma's value lies in it being a place for trade and business development. As a ‘working fair,' it enables us to engage with our customers on a personal level, helping them find the right solutions to their business challenges," explains Hellmann.

The event's intimacy also appeals to Rémi Daneyrole, who handles EMEA marketing and communications for DuPont Performance Polymers (Geneva). "It is a convenient venue for the key players in the value chain with a strong focus on processing within an intimate number of halls, compared with NPE or K," says Daneyrole.

Dr. Christoph Schumacher, Department Manager, Marketing and Corporate Communications, at Arburg takes it a step further, saying that the geographical proximity of the event to Arburg's headquarters in Lossburg, Germany, makes it "feel almost like an in-house event for us." K is all about vision, adds Schumacher, "but Fakuma is a place where work gets done. Here, we engage in numerous in-depth discussions with existing and prospective customers from Germany, Europe and overseas, and succeed in getting many specific projects off the ground."

Intimacy does not preclude an international scope, and Fakuma continues to attract a global audience in ever-increasing numbers. That adds to the appeal.

"While German-speaking markets are the dominant presence, the fair has expanded into an event for the entire European and international plastics community," says Hellmann, adding that this reach makes Fakuma one of the most exciting shows he attends.

Daneyrole echoes those sentiments. DuPont is a global company, he notes, and "the fact that a growing number of visitors come from abroad is very encouraging and worth us spending resources."

He and his peers will be delighted to learn that manufacturers and distributors from 35 industrialized nations will be exhibiting at Fakuma this year, many of them presenting new products and processes. Visitors will hail from more than 100 countries, according to show organizer P.E. Schall GmbH & Co. KG. To make it worth their while, some new features have been announced for the 2015 show.

The West Foyer will host a Thermoforming Island, where visitors can gain a more thorough understanding of this technology. The goal of this collective booth is to provide in-depth insights into the thermoforming process, especially in light of the fact that modern thermoforming is approaching unprecedented accuracy levels, writes Schall in a press release.

Additive manufacturing, aka 3D printing, has been part of the Fakuma mix for many years, but the applications continue to expand, and the technology will be featured prominently in October. In addition to its impact on tool and moldmaking, "new and alternative materials are offering [novel] options in the production of samples and series parts with the 3D-printing process, which is, in many cases, more than just supplementing injection molding, thermoforming and extrusion," writes the show organizer.

For more information about Fakuma 2015, go to the event website.

Tschüss, and see you at the show!