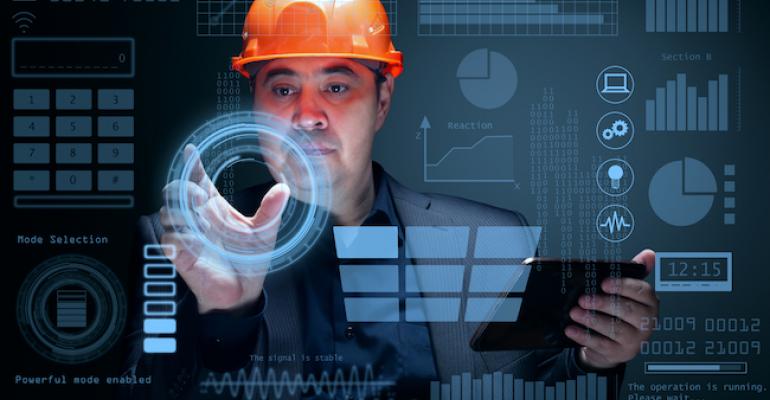 In addition to boosting productivity and efficiency and, in some cases, achieving stunning ROI, augmented reality (AR) also can mitigate the skills gap, according to AR pioneer Scott Montgomerie.

Remember Glass? When Google introduced its augmented reality (AR) eyewear, the initial excitement faded into disdain for early adopters, who earned a memorable nickname: Glassholes. The user affectation, as well as the cost and paucity of reasons to actually use them in nature, doomed AR wearables in the consumer electronics space, at least for now. But that changes if you look to the factory or shop floor, writes Jake Swearingen in the Intelligencer section of New York magazine. “In such settings, augmented-reality smart glasses are already being deployed across a wide swath of industries.” Scott Montgomerie, CEO and co-founder of Scope AR (San Francisco, CA), was an early advocate of AR in the manufacturing space and has played a key role in its adoption at companies such as Lockheed Martin and GE. He will speak to his experience at the Smart Manufacturing Innovation Summit during the co-located PLASTEC West and Medical Design & Manufacturing (MD&M) West event in Anaheim, CA, on Feb. 5 to 7, 2019. In advance of the event, he shared some perspectives on the technology with PlasticsToday.

The eureka moment regarding AR opportunities in manufacturing came to Montgomerie at a mining convention in Las Vegas. “We began playing around with AR in 2012, when a big mining company came to Scope AR, asking if our technology could be used for training. We did a proof of concept, which went really well, and the company asked us to bring it to a trade show in Las Vegas later that year.” The demo was an instant hit, with a constant stream of attendees telling Montgomerie and his colleagues that it was “the coolest thing” at the show. “And we were, like, really? Because those giant mining trucks with wheels bigger than your living room looked really cool to us!” recalled Montgomerie. Nevertheless, the die was cast. Scope AR started getting contracts from the likes of Toyota, Boeing and NASA. By 2015, “we decided that this platform was going to scale and there needed to be an easy way to create instructions and interact,” said Montgomerie.

Scope AR’s WorkLink allows users with no prior coding skills to create rich AR smart instructions that automatically collect data and provide actionable insights, which can be deployed globally through an app. Instead of rifling through paper instructions, users are immersed in computer-generated 3D imagery that overlays on top of the real world, explains the company on its website. The software is platform agnostic—"we want people to be able to use the technology they feel comfortable with," explained Montgomerie—and is also the first authoring system to provide full support for Microsoft’s HoloLens system. The company also offers Remote AR, which allows a worker to collaborate remotely with an expert, both of whom are seeing the same thing as if they were standing side by side. The possibilities and efficiencies that can be achieved are head spinning.

Using a HoloLens, for example, instructions can be overlaid on a part or piece of equipment using 3D models to perform maintenance or assemble a part, explained Montgomerie. Human error is dramatically reduced and efficiency skyrockets. Montgomerie cites Unilever, which reported an astonishing return on investment of more than 1,700%, and Lockheed Martin, which reduced manufacturing time by 50%.

“I’m particularly fond of the Lockheed Martin use case, which involves the space shuttle,” Montgomerie told PlasticsToday. It is making a “capsule with 3000 fasteners that need to be tightened. The old way of doing it was to paw through a 3000-page binder, look up the table, find the fastener in question, look up the torque setting, crawl into a tight space to get to the fastener, set the torque, do quality assurance to verify it was tightened properly, and rinse and repeat 3000 times,” said Montgomerie. “Our AR technology shows the technician where the fastener is and on top of that displays the torque setting. Productivity was improved by 50%,” said Montgomerie.

If the task is more complex and requires expert assistance, Remote AR offers a time-saving solution. “Suppose you have a part that doesn’t fit and you need to reach out to a manufacturing engineer or even the OEM,” explained Montgomerie. To help out, typically the expert would have to physically come to the shop floor. That could take days in some cases. With our technology, they can communicate over video in real time and real space across synchronized devices.”

Employee training is another area where AR is revolutionizing processes in organizations as disparate as the U.S. military and Walmart. Writing in Forbes, AR and virtual reality entrepreneur Lorne Fade notes that Microsoft has made a $480 million deal with the U.S. Army to train troops for complex, dangerous real-world situations via AR and that Walmart has partnered with Oculus and Strivr to teach personnel internal processes in an immersive AR-enabled way. For Montgomerie, AR technology may even represent a partial solution to the skills gap.

“It takes a lot of time to gain expertise—10,000 hours, right? What if you could receive instructions that are so intuitive that you wouldn’t have to memorize them?” said Montgomerie. “You can store tons of information on the internet and then you become the actuator.”

The skills gap is heightened as baby boomers retire en masse. “All of that knowledge is literally walking out the door,” said Montgomerie. “A feature that we are working on is the capability of recording interactions. As the technician is receiving instructions from an expert, the video, audio and 3D adaptation, on a separate channel, are being recorded. Later, you can go back and replay that interaction on top of that piece of equipment.” When the expert retires, his knowledge stays with the company and continues to educate young workers.

The power of AR in these scenarios and countless others resides in the richness of the communication channel. “The user interface allows you to communicate in a much more natural way. Now we’re interacting with real and virtual objects in a real world setting and that neatly solves so many problems that stem from a misinterpretation of instructions. Montgomerie cites an example that almost everyone on the planet can relate to: Assembling Ikea furniture.

“An expert attempts to communicate through diagrams, but the technician, or consumer in this example, misunderstands those instructions and uses the wrong fastener or beam. With AR, you can see the pieces overlaid on top of the furniture in 3D, and you will certainly make fewer mistakes. Through that form of communication, you viscerally understand what you need to do versus trying to interpret instructions,” said Montgomerie.

And that's the crux of it: Whether you're assembling a Dagstorp sofa or tightening screws on a space shuttle component, AR reduces human error and accelerates the process. No wonder that the AR market is forecast to grow at 75% CAGR through 2024, exceeding $50 billion by 2024, according to Market Study Report LLC.

Talent Talk: Ready to Hire an Industry Rock Star? Here’s How to Close the Deal
Dec 06, 2021