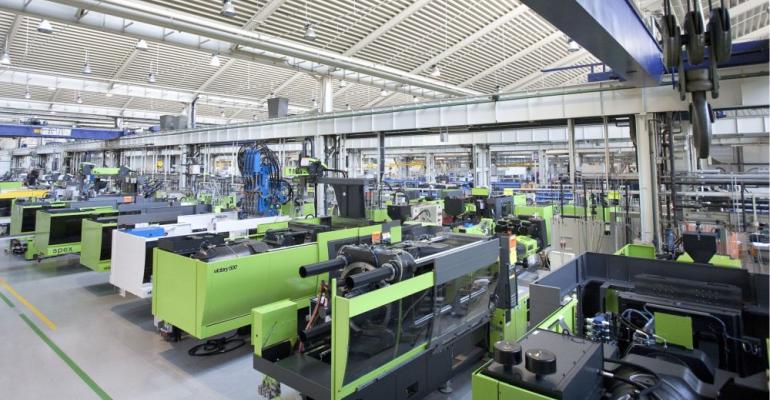 Schwertberg, Austria—Twice in the last 11 years Engel has endured catastrophes and both times it has emerged stronger. Three years ago, company revenues plummeted by nearly 40%, as the global economy imploded, while back in 2002, it was Mother Nature, not the marketplace, that laid the Austrian firm low when its Schwertberg, Austria headquarters flooded, forcing the company to gut the plant.

Schwertberg, Austria—Twice in the last 11 years Engel has endured catastrophes and both times it has emerged stronger. Three years ago, company revenues plummeted by nearly 40%, as the global economy imploded, while back in 2002, it was Mother Nature, not the marketplace, that laid the Austrian firm low when its Schwertberg, Austria headquarters flooded, forcing the company to gut the plant.

After the flood, the company rebuilt, investing in new, more efficient technologies to ultimately boost capacity, and now, just three fiscal years after it watched sales collapse, Engel has completed a record year, growing its turnover from that low in 2009 by 165% to Euro 950 million ($1.26 billion).

"Coming back to the flooding of 2002 and our strong financial stability, [Engel] can overcome problems and crisis without any intervention," Engel CEO Peter Neumann said during a pre-K press conference in Schwertberg. "This gives a certain freedom in your decisions, which are long-term decisions."

In the years since the business low, Engel has racked up full year sales Euro 615 million, Euro 834 million, and now Euro 950 million. In a press release, Engel noted that it expects further growth of about 5% each year for the next three years.

In the three years since the last K show, Engel has also invested Euro 67 million back into its business, including Euro 23 million into Schwertberg, Euro 15 million into St. Valentin, and Euro 12 million into Shanghai. In addition to machinery investments, Engel has invested in people, with employment up 40% from 2990 in 2010 to 4200 today. Those workers are spread among eight production facilities, and 29 subsidiaries, globally, with fully 95% of global sales go through direct Engel employees, according to Neumann.

Strong return
When business came back, it came back faster and stronger than Engel had anticipated. "We never thought we'd see such a fast recovery form the 2010 crisis," Neumann said, adding that although the total market for injection molding machines is shrinking, falling from 94,320 units in 2011 to 88,600 in 2012, with a further contraction forecast to 84,000 in 2020, Engel's business and market share are on the rise due to its high technology focus.

"The global industry is moving towards higher technology, higher quality products, which is where we are," Neumann said. "This is something that helps us. Our long-term strategy is focusing on gaining market share."

Changing Chinese market
The most marked decrease in machine sales for the global injection molding industry is in China, where after peaking at 50,000 machines in 2011, sales fell to 45,000 units in 2012, and are forecast to contract further to 35,000 in 2020. Less machines doesn't necessarily mean less output, however.

"China's market is decreasing," Neumann said, "but the performance and quality output of machines are going up, so they don't need such a high number of machines. It's a trend towards higher quality machines, higher technology machines."

In Asia, Engel generated record turnover of Euro 145 million in the 2012-2013 fiscal year. The largest share of that new high watermark came in China. Overall, Engel noted that it has been able to triple its turnover in Southeast Asia over the last two years, and despite a relatively weak 2012-2013 fiscal year, Engel also expects sales to increase in India.

Taking the long view
As Neumann spoke, to his left sat Stefan Engleder, scion of the company founder and the fourth generation to help run the company, becoming the chief technology officer last year.

"What is still so important for Engel is that it's still a family business," Neumann said. "Our customers have seen the same faces for a long time. Business very often depends on trust and close relationships, and this is a very important factor; the management has been here for many, many years. You see the same faces, we look a little bit older than before, but it's the same faces."

That experience and institutional knowledge of the company and the industry help give the company a longer view.

"We think the plastics industry, and the plastics machinery industry, is a long-term industry," Neumann said. "An injection molding machine has a lifetime of 10 to 15 years, and a new technology takes five or more years to develop. All of this requires a different strategy than just meeting short-term payback of financial investors."