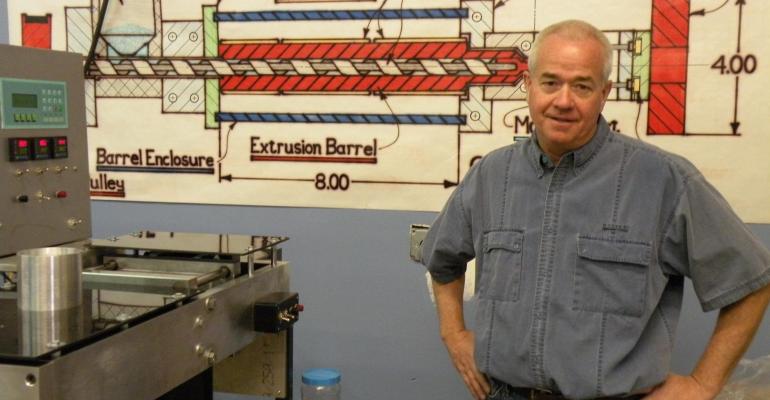 In one hand, Rick Fitzpatrick holds a pile of plastic pellets, in the other, a finished part. "How much energy do we need to convert this," he says, raising the hand with the pellets, "into that," he finishes, lifting the part. That essential question should be the only one injection molding technology answers, but to Fitzpatrick, many of the accepted material, machinery, and design norms taken as a given in injection molding, are old paradigms.

"We're taught that you generate shear heat in the screw barrel interface with pressure and that material will transfer heat to the full volume of plastic wrapped around the screw.  " Fitzpatrick says, "but plastic is an insulator; it doesn't transfer heat well."  To overcome this, Fitzpatrick says molders still must rely on excessive injection pressure and velocity to induce shearing during injection and generate heat at the nozzle, runner system and gate. In the end, "You use more energy to create the force than you would to electrically generate the heat than is needed to melt the volume of plastic required for the part."

No more banging, crunching, slamming
Fitzpatrick is standing in a leased, unmarked garage on the outskirts of Loveland, CO. The two-bay space, with an attached office, has been his home for three months now, after initial interest in his revamped injection molding machine grew strong enough to justify a move out his two-car garage. On this day, four of his MYOS (Make Your Own Stuff) Plasaver molding machines in various stages of completion sit atop homemade plywood and 2X4 work benches.

After warming up for about 8 minutes, the machine at the front of the shop begins producing parts for a client's cookie dipping invention, with, as Fitzpatrick notes, none of the "banging, crunching, and slamming" of a traditional machine, or, for that matter, the purging required at the start of a machine's run. After a 20-second cycle, Fitzpatrick removes the slender sickle shaped part from a bin beneath his machine's single-cavity tool. "Traditionally, you slam material into the mold and rely on gate freeze to seal the cavity," Fitzpatrick says, "but you also get sinks."

With the Plasaver, there are no sink marks on the part with a .045 to .350-inch wall thickness. Fitzpatrick says his "extrusion injection" technology almost works like gas-assist molding, with a  steady stream of molten resin taking the place of gas, preventing sink by holding internal pack pressure and forcing sustained contact with mold cavity walls to force cooling. The extrusion injection technology also delivers larger shot sizes than thought possible with smaller machines. The machines use a constant pitch screw that's really designed to act as a pump, delivering material that's been brought to its melt temperature in a static state.

This machine represents his smallest standalone model. Fitzpatrick admits for his machines he doesn't really talk in terms of clamp tonnage. If he had to put a figure on it, this machine would have around 5-6 tons of clamp pressure, utilizing a toggle clamp.  Where a conventional machine may start with injection pressures of 25,000psi to deliver 2000psi to the mold cavity, the Plasaver machine operates with much less pressure loss in the process and this means holding the mold shut with ½ to 1 ton of clamp pressure per inch of projected area as opposed to the industry standard 3-5 tons of clamp.

The smallest molding machine produced by Plasaver, which Fitzpatrick says would sell for just under $17,000, is plugged into a standard power strip, which itself, is simply plugged into a wall socket.  Fitzpatrick figures about 1-1.5 kilowatt hours of power are drawn, for about $0.10-$0.15 of electricity per hour.

Fitzpatrick can build out custom designs, with a vertical press for insert molding in his shop at this time, as well as some standard output designs: the MP-20, with a 20g shot size; the MP-50 with a 50g shot; and an MP-100 with 100g shot size. Fitzpatrick figures the MP-100 could run an 8- or 16-cavity cap mold, while still only requiring 3 kilowatt hours of electricity.

A high mix, low volume solution
Rich Kopcho, Fitzpatrick's MYOS Plasaver business partner, came to the venture with a background in high-mix low-volume manufacturing, a sector that traditional injection molding struggles to serve because of the underlying economics. "When I came up in manufacturing, a lot of companies were vertically integrated, but that's not the case now," Kopcho says. "Plastics are the problem when you're in high mix. Economies of scale are key in traditional plastics molding, so some companies steer away from plastics." That could be different, Kopcho notes, if the required molding machines didn't take up swaths of floor space or need to run 24/7.

Kopcho says just-in-time (JIT) manufacturing requires balanced resources, where a shop with five work stations, for instance, would have to consider how much time is consumed at each, making a custom mix a challenge. "That's where this machine excels," Kopcho says, gesturing towards the Plasaver, "you can change [the workload] up."

Fitzpatrick notes that his Plasaver, with a four-cavity mold and running 24/7, could achieve production-scale quantities as well. That potential output, the approachability of the technology, and lower investment have helped pique interest, according to Fitzpatrick. "People are seeing costs of manufacturing in places like China go up," Fitzpatrick says. "They tell me, 'Costs are getting out of hand; how do we mold this ourselves.' They see the machine and say, 'We can do this.' [The Plasaver] is like an appliance, not a lot different from a copier or a printer."

In addition to a low-cost route to vertical integration for companies intimidated by the cost and technology of standard injection molding machines, Fitzpatrick says his design has generated interest from researchers as well. He is currently building a machine for Singapore's Institute for Materials Research and Engineering (IMRE), which is partnering with the Singaporean Institute of Manufacturing Technologies (SIMTech) to develop molding processes for unconventional materials.

Like shooting a gun
One of Fitzpatrick's early jobs in the molding industry involved work on the first inkjet printers, at a time when it wasn't assumed that everyone would have their own printer. He hopes this molding process, with more predictable temperatures and pressures than traditional injection molding, will make molding more accessible. "Traditional molding is like shooting a gun," Fitzpatrick said, noting the power and pressure involved. "It's a fixed-input/variable-output machine, you have to inspect what came out of the machine to see if it is good. On this control, output is exact. We can control the injection process during the molding cycle to dictate a specific outcome."