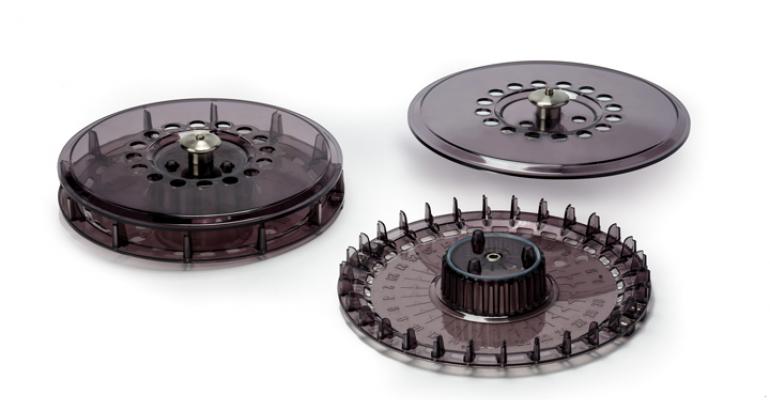 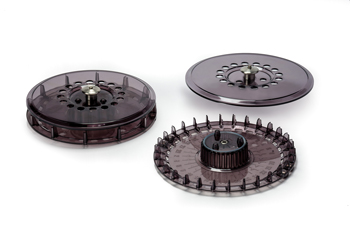 ELITechGroup had traditionally used a transparent polycarbonate (PC) resin to mold the tops and bottoms of its 12- and 30-slide carousel designs, as well as the thermoplastic caps that retain magnets in each carousel. However, PC frequently exhibited crazing and cracking after repeated exposure to the harsh chemicals common to slide-staining applications. To amend this, the company set out to redesign its carousels by sampling several alternative transparent materials to mold the carousel parts, including polyethylene, polyvinylidene fluoride, polybutylene terephthalate-based blends and a copolyester material. It also sampled a competitive PPSU, before selecting Solvay's high-performance, transparent Radel material.

In addition to the aforementioned properties, the material was selected because it enabled the design engineers to streamline assembly operations by allowing the use of ultrasonic welding to retain the magnets within the carousel.

ELITechGroup's two carousel designs integrate magnets to enable the slide stainer to detect the part's rotational position as well as the number of slide placements it has. Because the carousel and magnet caps are both injection molded using Radel PPSU, it is a comparatively simple and cost-effective step to firmly bond these parts together using ultrasonic welding.

Radel PPSU is resistant to methanol, iodine, phenol and other chemical agents that are applied to slides via atomizing spray nozzles inside ELITechGroup's diagnostic systems. The material also can withstand repeated steam sterilization and maintain its toughness and impact resistance.

Solvay experts will be on hand at the American Academy of Orthopaedic Surgeons' (AAOS) 2015 Conference to discuss this and other applications, as well as Solvay's portfolio of products for the healthcare industry. AAOS 2015 is scheduled to run from March 25 to 27 at the Venetian Congress Center and Sands EXPO in Las Vegas.