The joy of cooking with … plastics

Blais' live demonstrations at the Plastics Make it Possible booth will showcase the versatility of plastic products in professional and home kitchens, "underscoring how plastics make cooking and entertaining easier and more creative, while also contributing to sustainability," the news release stated.

"In my kitchen I use all sorts of plastic gadgets, from your standard spatulas and spoons to more unexpected tools like pipettes and syringes," Blais said. "Plastics give me the durability and versatility I need in order to be creative in the kitchen, so I rely on them to develop new recipes. And my fridge is filled with resealable plastic containers to keep ingredients, sauces, and leftovers fresh and organized."

"Plastics are an iconic part of any professional chef's kitchen," he said.

"Richard Blais is admired for his creativity, so he's the perfect chef to highlight the creative uses of plastics at the Food Network New York City Wine & Food Festival" said Steve Russell, vice president of plastics for the American Chemistry Council, which sponsors the Plastics Make it Possible initiative. "We hope that his star power will encourage folks at the Festival and at home to recycle more plastics and to buy products made with recycled plastics."

This partnership might help show consumers that not all plastics in the kitchen have to do with PVC and BPA, especially since BPA and food packaging continues to dominate the headlines. The French Senate recently passed a law banning use of BPA in food packages, which was approved by the National Assembly in 2011. The law bans, as of Jan. 1, 2014, production, import, export, and distribution of any food packaging containing BPA.

PlasticsEurope, the EU trade organization for plastic manufacturers, stated that "there is no benefit to public health from the ban, and the move is in violation of EU food contact laws."

Meanwhile, Health Canada's Food Directorate has concluded that the current dietary exposure to BPA through food packaging uses is not expected to pose a health risk to the general population, including newborns and young children.

During my research for this blog post, I came across a cooking method that is apparently even made better with plastics 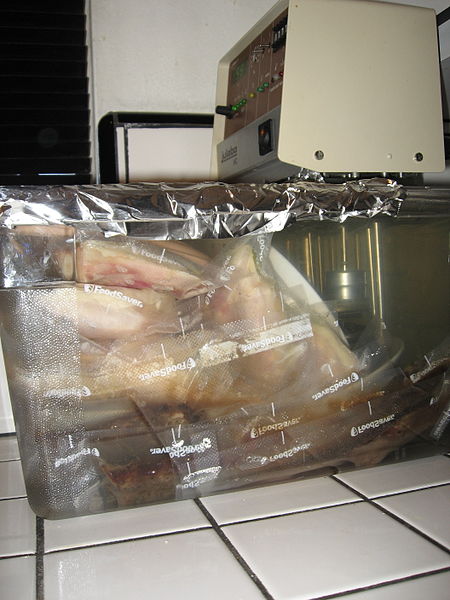 Touted as a "remarkable" way to cook proteins and most often used by fine dining chefs, sous-vide is a method of cooking food sealed in airtight plastic bags in a water bath for longer than normal cooking time at an accurately regulated temperature much lower than normally used for cooking, typically around 55 °C (131 °F) to 60 °C (140 °F) for meats and higher for vegetables. The intention is to cook the item evenly, and to not overcook the outside while still keeping the inside at the same "doneness," keeping the food juicier.

Nathan Myhrvold, Microsoft's former chief technology officer, has self-published a six volume cookbook, "Modernist Cuisine, which focuses a large part on the sous-vide cooking method. In article on the San Francisco Chronicle, he was asked about the safety of plastic and he said the practice is not harmful as long as people use "the right kind of plastic."

The article said he uses sous-vide vacuum pouches that are specifically made for vacuum sealers and contain up to five layers of different types of protective plastic. For home cooks, Ziploc bags are a safe alternative because they are made from polyethylene, which does not break down at the low temperatures of sous-vide cooking.

"What people are really concerned about when they are concerned with plastic bags is bisphenol A, or BPA," Myhrvold told the publication. "There is no BPA in Ziploc bags."

He did urge consumers to avoid plastic containing PVC in the kitchen.