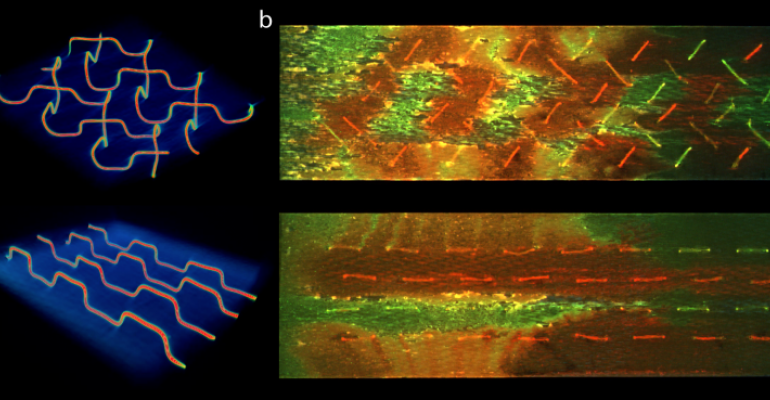 It might have taken billions of years, but nature, for the most part, has been very successful at solving many of the problems we find ourselves confronting today. It's a realization that has taken some time to sink in, but which has now grown into a discipline called biomimicry. Biomimicry is all about learning from nature; studying nature's designs and emulating these to solve human challenges. Which is how we ended up with products like Velcro and self-cleaning coatings.

It might have taken billions of years, but nature, for the most part, has been very successful at solving many of the problems we find ourselves confronting today. It's a realization that has taken some time to sink in, but which has now grown into a discipline called biomimicry. Biomimicry is all about learning from nature; studying nature's designs and emulating these to solve human challenges. Which is how we ended up with products like Velcro and self-cleaning coatings.

One of the more intriguing capabilities in nature is, however, the number of biological systems that are able to self heal. Scientists, spurred on by the potential economic benefits of materials that would be able to repair themselves  - longer lifetime, lower maintenance costs and more efficiency - have worked to develop self-healing systems for various materials, including plastics. And with success: various polymers are now available which have  the intrinsic ability to repair damage caused by usage over time. Up until now, however, composites, were a whole different ballgame. But once again, nature showed the way.

The most common type of damage occurring in fiber-reinforced composites is delamination. Internal delamination damage in composites is not  only difficult to detect, it is nearly impossible to repair by conventional methods. It is a problem that has been a significant factor limiting more widespread use of these materials, as a small, internal crack can quickly develop into irreversible damage.

Now, researchers in the Beckman Institute's Autonomous Materials Systems (AMS) Group at the University of Illinois have developed a new self-healing system, which they say allows fiber-composite materials to heal autonomously.

The team, led by professors Nancy Sottos, Scott White, and Jeff Moore, created 3D vascular networks-patterns of micro channels filled with healing chemistries-that thread through a fiber-reinforced composite. When damage occurs, the networks within the material break apart and allow the healing chemistries to mix and polymerize, autonomously healing the material, over multiple cycles. They demonstrated that vascular architectures not only provide efficient and repetitive delivery of healing agents, but they also provide increased resistance to delamination initiation and propagation. These results were detailed in a paper titled "Continuous self-healing life cycle in vascularized structural composites," first published online on April 14 in the journal Advanced Materials.

"This is the first demonstration of repeated healing in a fiber-reinforced composite system," said Scott White, aerospace engineering professor and co-corresponding author. "Self-healing has been done before in polymers with different techniques and networks, but they couldn't be translated to fiber-reinforced composites. The missing link was the development of the vascularization technique."

The vessel system is made up of two different micro channel networks, each containing one of the two liquid healing agents (an epoxy resin and hardener). Delamination damage ruptures the capillary network and triggers the delivery and subsequent polymerization of reactive chemical species. Two different vascular architectures were tested, in order to determine the best configuration, which would allow the healing agents to combine effectively after being released within the crack.  The researchers found that arranging the vessels in an overlapping, "herringbone" design promoted a better mixing of the liquids compared to a parallel configuration. As the researchers wrote: "In the parallel configuration, diffusion is primarily limited to adjacent bands between the delivered healing agents. In contrast, the herringbone pattern enhances mixing through increased interfacial, and overlapping fluid boundary layers."

"When a fracture occurs, this ruptures the separate networks of healing agents, automatically releasing them into the crack plane-akin to a bleeding cut," said Jason Patrick, a Ph.D. candidate in civil engineering and lead author. "As they come into contact with one another in situ, or within the material, they polymerize to essentially form a structural glue in the damage zone. We tested this over multiple cycles and all cracks healed successfully at nearly 100 percent efficiency." Remarkably, after each healing cycle, it was found that higher loads were required to propagate the crack in the test samples with the herringbone configuration. The researchers attributed this higher healing efficiency to the improved fluid interspersion in the fracture plane.

Fiber-composite laminates are constructed by weaving and stacking multiple layers of reinforcing fabric, which are then co-infused with a binding polymer resin. Using that same process, the researchers stitched in a sort of fishing line, made from the biopolymer PLA and called "sacrificial fiber," within the composite. Once the composite was fabricated, the entire system was heated to melt and evaporate the sacrificial fibers, leaving behind hollow micro channels, which became the vasculature for the self-healing system.