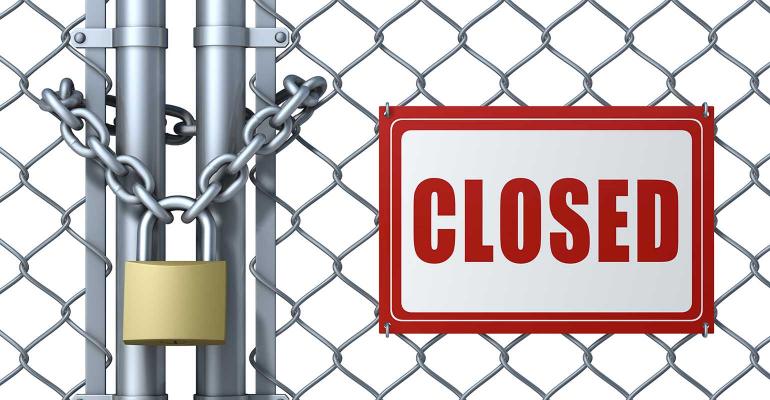 In case you haven’t heard the latest, the Biden administration is getting serious about the plastic waste “crisis.” According to an article in the Epoch Times, “a three-year ban on plastics production is being pushed by congressional Democrats” that would “collapse the oil and gas industry, causing major national economic damage,” according to Rep. Bill Johnson (R-OH). [Note from the editor: The Epoch Times is a right-wing media organization associated with the Falun Gong religious group.]

The revelation came at an Energy Subcommittee Hearing of the House Energy and Commerce Committee, as Secretary of Energy Jennifer Granholm commented that the Biden administration “supports a ban on hydraulic fracking for fossil fuels on all public lands,” in response to Rep. Johnson’s question. This comment came as a surprise to the subcommittee, as the article noted that “Biden has previously said he only supports a temporary moratorium of fracking on public lands, rather than a permanent ban.”

Rep. Johnson explained that “Section 902 of the Clean Future Act that is being pushed through the House and Senate by Democrats right now places a three-year moratorium on new permitting for plastics manufacturing. Section 902 of the Clean Future Act, introduced on March 2 of this year, “places a temporary pause on new permits for facilities that produce plastics, or the raw materials used to produce plastics (such as ethylene and propylene), as well as facilities that repolymerize plastics into chemical feedstocks.

Tony Radoszewski, CEO of the Plastics Industry Association (PLASTICS), said in response at that time, “Addressing climate change is a laudable goal, but the Clean Future Act — as currently introduced — aims to end the manufacture of one of our country’s most valuable and sustainable materials — plastics. Multiple life-cycle analyses show that plastics are the most sustainable material in comparison to all existing alternatives, including glass, aluminum, and paper.”

So there you have it, folks, just in case you’ve not heard of this scheme to further destroy the US economy. According to a 2019 analysis by the US Chamber of Commerce’s Global Energy Institute, if the ban were enacted in 2021, “by 2025 it would eliminate 19 million jobs and reduce US GDP by $7.1 trillion. Job losses in major energy-producing states would be immediate and severe; in Texas alone, more than three million jobs would be lost. Tax revenue at the local, state, and federal levels would decline by nearly a combined $1.9 trillion, as the ban cuts off a critical source of funding for schools, first responders, infrastructure, and other critical public services.

“Energy prices would also skyrocket under a fracking ban. Natural gas prices would leap by 324%, causing household energy bills to more than quadruple. By 2025, motorists would pay twice as much at the pump for gasoline, as oil prices spike to $130 per barrel.”

Rep. Johnson made a good point to Epoch Times reporter Mark Tapscott, congressional correspondent for the newspaper, when he noted that building electric vehicles — the darling of environmentalists — requires plastic. I’ll add to that by noting that every vehicle made requires plastic, which has done much to reduce the weight of vehicles resulting in more miles per gallon.

Does the Biden administration believe that we should also put the automotive industry on hold for three years? What about the packaging industry? Should it return to glass (there’s a silica sand shortage globally that might put a kink in that plan), or paper? But what about all those trees that Big Oil is counting on for carbon storage so they can get the carbon credits they need to keep producing oil? If those trees have to be cut down to make paper packaging for everything that is now packaged in plastic, not only will there be a big increase in CO2 releases from forest cutting, but Big Oil will have to renege on its carbon credit promises.

A second bill, the Break Free from Plastics Pollution Act, introduced in the House of Representatives just three weeks after the Clean Future Act, would have the same disastrous effect on US manufacturing and, in fact, the entire economy, given that plastics are ubiquitous across all industry sectors. Commenting on that bill, PLASTICS’ Radoszewski commented, “This legislation would be absolutely devastating to manufacturing jobs and America’s overall economy just as we begin to rebound from the effects of COVID-19. This bill is a direct threat to the nearly one million men and women who work in the domestic plastics industry. Additionally, this misguided legislation could have the unintended consequence of leading to an increase in greenhouse gas emissions.”

Anyone in Congress who believes that Section 902 is a good idea had better take a look around and get ready to sacrifice a lot of products. From vehicles and appliances to medical devices and household products, nearly everything we use every day will instantly become unavailable. Additionally, if more than 19 million jobs are lost, people won’t have the money to buy anything anyway, so unavailability won’t matter.

As for all of these companies entering the chemical recycling business, they’d better have a plan B in mind because Section 902 will close those down pretty quickly, as well.

Someone in DC had better become aware of the law of unintended consequences before they decide to ban plastics manufacturing. If you’ve never before contacted your congressional representatives or senators, now would be an excellent time to let them know how you feel about this boondoggle that would destroy not only the plastics industry but every other industry in the United States.

Those two bills, and specifically Section 902, which push for a moratorium on plastics manufacturing become rather puzzling given the fact that the Department of Energy (DOE) plans to provide $14.5 million in funding through the Plastics Innovation Challenge for projects supporting the development of advanced plastics recycling technologies and new plastics that are recyclable-by-design. “The DOE funding opportunity will support a range of projects to develop economically viable solutions to convert plastic films to more valuable materials and to design new plastics that are more recyclable and biodegradable,” said PLASTICS.

Well, not exactly, if the two bills announced in March somehow make it through Congress, which will put an end to plastics manufacturing as well as advanced recycling and other technologies.

PLASTICS added, “These solutions can increase investments in recycling processes and recycling jobs across America and reduce the amount of plastic that ends up in the environment.” PLASTICS noted that it has “long been involved in efforts to further advancements in such areas as advanced recycling, improving traditional mechanical recycling, bioplastics, and repurposing of plastics as fuel.” However, all those efforts will be for naught if Congress decides to put a lid on plastics manufacturing.

Well, I’d question just exactly what Biden recognizes about the plastics industry or if he’s even aware of the two bills in the House that would put the kibosh on plastics manufacturing. I mean, really? Does the left hand know what the right hand is doing in DC? Does anyone even talk to the Biden administration about what’s going on in the House? It appears to be total confusion with a lot of conflicting interests that could get more convoluted if these bills should pass.

“Plastics are at the center of life in the 21st century,” said Radoszewski. “We all enjoy their many benefits every day. The Plastics Innovation Challenge will help us all to enjoy those many benefits with greater confidence about the effect we’re having on the environment. This is a great first step, and the plastics industry will continue to work with the Biden administration and Congress to ensure that continued investment in America’s recycling infrastructure is included in any upcoming federal infrastructure package.”

The biggest plastics challenge more likely is just keeping the doors open to all of the plastics manufacturing in this country, or we won’t have to be concerned about recycling or advanced plastic materials technology. There won’t be any plastics to process or recycle.