The Global Landscape of Plastics Bans and Regulations 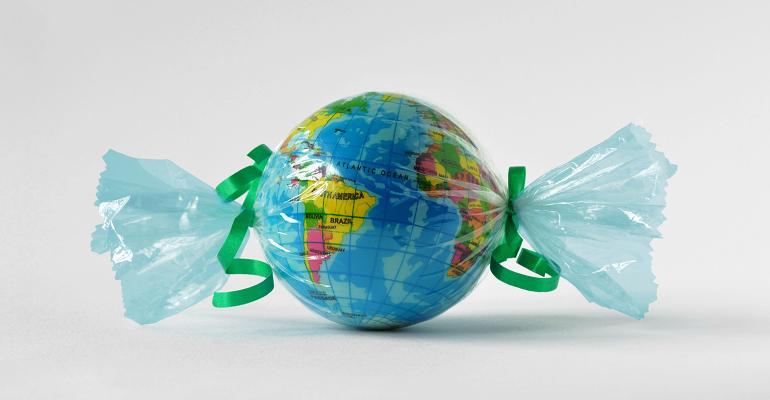 As a UN committee meets this week in Uruguay to begin laying the groundwork for an international treaty to end plastic pollution, we take stock of where things stand today.

When the United Nations’ (UN) historic plastics pollution resolution to address the full lifecycle of plastics won overwhelming endorsement from member nations in March, the stage was set to begin negotiations for a global plastics treaty. The Intergovernmental Negotiating Committee is currently meeting in Uruguay through Dec. 2 as a first step in laying the groundwork for this treaty.

According to Principles for Responsible Investment (PRI), more than 60 nations have introduced bans and levies on plastic packaging and single-use waste. In the third report of the PRI series, “The Plastics Landscape,” the organization noted that “although there are currently no policies or regulations that directly target the primary production of plastics, companies involved in producing raw materials for plastics (including oil and gas companies) may be affected indirectly through policies which aim to boost plastic recycling and reduce fossil fuel dependence and greenhouse gas emissions.”

To be sure, the spotlight is clearly shining more intensely on EPR — extended producer responsibility — as evidenced by California’s single-use law, which went into effect this summer. In announcing the intent to forge a legally binding international agreement on plastic pollution by 2024, the UN pointed out that “plastic production has risen exponentially in the last decades and now amounts to 400 million tons per year — a figure set to double by 2040.” And, the PRI noted, “there are EPR policies in the United States, Canada, and the European Union (EU). More EPR policies are likely to come into force as states in India and other jurisdictions begin to adopt them.”

Furthermore, the UN resolution, adopted March 2, stressed “the importance of promoting sustainable design of products and materials so that they can be reused, remanufactured, or recycled and, therefore, retained in the economy for as long as possible, along with the resources they are made of, and of minimizing the generation of waste, which can significantly contribute to sustainable production and consumption of plastics.”

Panelists at K 2022 in Düsseldorf, Germany, in October addressed their hopes for upcoming talks on a global plastics treaty in a discussion organized by the trade group Plastics Europe. Panelist, Nicholas Kolesch, Vice President of Projects at the Alliance to End Plastic Waste, stressed that plastics recycling standards should be addressed on a global level. Noting that waste management is often a municipal — not state or federal — responsibility, Kolesch’s hope is to “bring more standardization around the collection activities and take out some of that confusion.”

Significant plastics regulations that went into effect this year or that are on the horizon include:

APCO will publish its annual consumption and recovery report in December, including industry progress against the targets, according to a spokesperson for Australia’s Department of Climate Change, Energy, the Environment, and Water. APCO is reviewing its targets to identify barriers to sustainable design, collection, recycling, and reprocessing, and recommend interventions to support further industry progress by 2025.

“The Australian Government is playing a leadership role in negotiations toward a legally binding international agreement to end plastic pollution,” the spokesperson said. “Australia recently announced its decision to join the High Ambition Coalition to End Plastic Pollution by 2040, to work with other ambitious like-minded countries.”

According to data that the PRI cited from the UN Environment report, “Single-use plastics: A roadmap for sustainability,” approaches to regulating plastic bags globally range from bans or taxation to some combination thereof. In Africa, 25 nations have banned production and use of plastic bags, the most of any continent; 58% of those introduced plastic bag bans between 2014 and 2017.

Similar combinations of bans and economic penalties have been initiated across Asia, Central and South America, Europe, North America, and Oceania.

As explained in Plastics Europe’s report, “Plastics — the Facts 2022,” global plastic production has rebounded after the COVID-19 pandemic, improving 4% to more than 390 million tons in 2021. China’s grew to 32% in 2021 while Europe’s share declined from 19% to 15% of the global market. Market share for other regions included:

That said, the plastics industry is threading the needle to balance its product and profit mission with escalating environmental, social, and governance (ESG) expectations.

“Our members are undertaking huge investments and a far-reaching reorganization of their production and technology base. In so doing they are seeking ways to solve issues like plastics waste and climate change, while continuing to offer its various value chains, consumers, and society the many benefits that plastics offer.”

The path to transitioning to net zero by 2050, Janssens concluded, is “faster systemic change and more intense and effective collaboration between all parts of the European plastics’ system and policy makers. . . . We also need a new and enabling policy framework that better incentivizes investment and innovation by fostering a climate of creative competition in a circular economy for plastics.”

An all-encompassing, holistic approach has the full support of Andrés del Castillo, senior attorney for the Center for International Environmental Law (CIEL).

“Only seeing the plastics crisis as a waste or leakage issue significantly minimizes the problem,” he stressed. “The plastics crisis must be seen as a full lifecycle issue, from extraction to production to use and end of life.”

In terms of how the UN resolution on plastics waste should progress into a treaty, he explained: “The mandate specifically calls for the treaty to be negotiated by the end of 2024 and for a vote to occur at the start of 2025. Since then, parties came together to establish a rough outline of a schedule. It includes five meetings of an intergovernmental negotiating committee (INC), and the next United Nations Environment Assembly (UNEA-6). INC-1 started on Nov. 28 and runs through Dec. 2 in Punta del Este, Uruguay.

“The resolution is the recipe for making the most ambitious treaty covering the full life cycle of plastics, not only plastic waste.”

To assess the nations that seem to have the clearest path and most workable solutions, he added, the CIEL just published an overview of submissions made by 44 countries and the European Union in advance of INC-1. “The document analyzes nations’ priorities for the first set of negotiations. From this list, we can see that countries are raising concerns (not just) about plastic products, but the materials themselves. The instrument should seek to regulate single-use plastics by including a general prohibition in addition to a ‘positives’ list that can exempt specific items or sectors from the prohibition. Developing a prohibition can also incorporate different deadlines to allow countries and companies to adapt to the changes.”

Notably, he concluded, efforts by plastics manufacturers and producers to partner with governments to meet plastic pollution reduction goals “should always be met with a critical eye. Many of these programs are built around recycling, but, as a recent Greenpeace report highlights, the majority of plastics are not recyclable. At the same time, these are the same companies that are pushing back against single-use plastic bans and other policy efforts that aim at curbing plastic production. Attempting to curry favor with the public should be seen for what it is — greenwashing,” said del Castillo.

Coming next: A look at US plastics regulations in effect and on the immediate horizon.