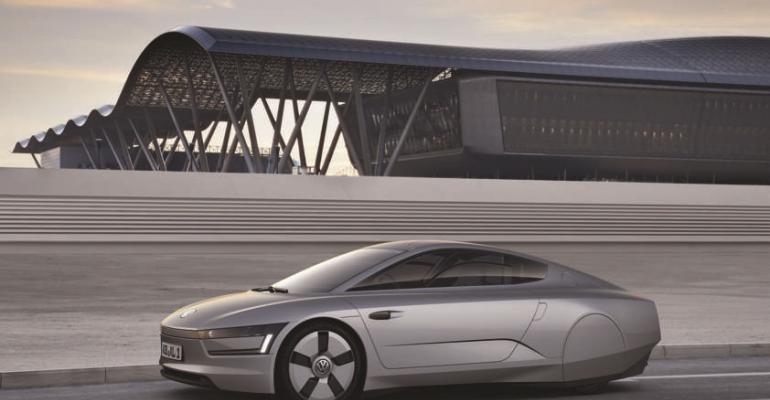 The XL1 Super Efficient Vehicle from Volkswagen has gone into limited production at the automaker's Osnabrück plant in Germany with carbon fiber-reinforced plastic (CFRP) and aluminum dominating as materials of construction. The vehicles boasts fuel consumption of just 0.9 l/100 km (approx. 261 mpg US).

The XL1 Super Efficient Vehicle from Volkswagen has gone into limited production at the automaker's Osnabrück plant in Germany with carbon fiber-reinforced plastic (CFRP) and aluminum dominating as materials of construction. The vehicles boasts fuel consumption of just 0.9 l/100 km (approx. 261 mpg US).

Volkswagen is producing large parts for the XL1 using CFRP. The monocoque with its slightly offset seats for driver and front passenger, all exterior body parts as well as functional elements such as the anti-roll bars are all made of CFRP. The preferred CFRP components at Volkswagen are those produced using the RTM process (resin transfer molding).

Volkswagen says that compared to other methods such as manufacturing CFRP in a prepreg process, CFRP production via RTM is more economical-with lower costs at higher part volumes-because it can be automated. The RTM parts are produced in multi-shell, heated and vacuum-sealed tools. This involves injecting liquid resin at high pressure into the tool containing the semi-finished carbon material whose interior has the shape of the part to be produced. The part cures afterwards in the mold.

Of the Volkswagen's overall weight of 795 kg, the drive unit accounts for 227 kg, running gear 153 kg, the equipment (including the two bucket seats) 80 kg, and the electrical system 105 kg. That leaves 230 kg, which is precisely the weight of the body - produced largely of CFRP - including wing doors, front windscreen with laminated glass technology and the ultra-safe monocoque.

A total of 21.3% of the new XL1, or 169 kg, consists of CFRP. In addition, Volkswagen uses lightweight metals for 22.5% of all parts (179 kg). Only 23.2% (184 kg) of the new XL1 is constructed from steel. The rest of its weight is distributed among various other polymers (e.g. polycarbonate side windows), metals, natural fibers, process materials and electronics.

Thanks to CFRP, the XL1 is not only light in weight but also very safe as well. This is due in part to the high-strength and yet lightweight CFRP monocoque. In an emergency, it provides driver and passenger with the necessary survival space. The intelligent design of the load paths, including the use of sandwich structures in the monocoque, is responsible for this. In addition, the aluminum structures of the front and rear sections absorb the majority of the impact energy.

These principles were likewise implemented in the design of the CFRP doors, where an aluminum absorbing beam is responsible for the absorption of the energy; moreover, a stiff CFRP door frame minimizes the intrusions into the CFRP safety cell. The rescue of the passengers was also given a great deal of attention: In case the XL1 overturns and comes to a rest on the roof, pyrotechnical separating screws facilitate the opening of the doors (swing doors).

New painting process
A total of 32 exterior skin parts are painted on the XL1; six of them are visible carbon parts. The CFRP parts are specially prepared for painting within the framework of XL1 production. To fulfill the quality standard of a Class A paint job despite a minimally thin and therefore lightweight paint layer, in the RTM process a special fleece layer or resin film is added to the parts as a cover coat. Compared to conventional CFRP paints used in the industry, this yields a weight reduction of more than 50%. This innovative CFRP painting process owes its implementation to intensive fundamental work by the Volkswagen Technical Development Centre in Wolfsburg and an associated series of tests by paint experts at the Osnabrück plant.

The paint itself consists of three layers. The primer with a filler material is followed by the base paint-the colored layer. Then the final layer or clear coat is applied, which provides a high level of scratch resistance and UV resistance. In the interior, on the other hand, a decorative "matt pearl grey" paint is applied, or-on visible carbon parts such as the sills-a matt clear coat. The same applies to the roof structure on which Volkswagen omitted trim parts in the interest of attaining optimal weight and maximizing open space for the occupants.