For the Dutch life science company DSM, the London Olympics are more than a 16-day international sports event.

For the Dutch life science company DSM, the London Olympics are more than a 16-day international sports event. They are a proving ground for the specially developed, new material used to construct the boats in which the Dutch Women's Eight and Men's Lightweight Four are being rowed. 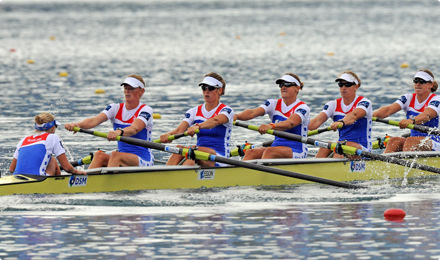 DSM is a company that takes great pride in its innovative capacity. It has been an Innovation Partner of the Dutch Olympic Committee since 2001, and, as it points out on its website, has learned much from this relationship: "At the highest level, the more you achieve...the harder you push yourself to do even better next time. It's one of the many invaluable lessons we've learned from our sporting relationships with Olympic champions, Gold medalists and various renowned sporting organizations."

Hence the decision to supply innovative technology to build the rowing team's new boats fits perfectly with the company's philosophy that "athletes inspire us to come up with new breakthroughs, innovations and ways of making brighter lives for all."

The new boats were built by the Empacher company, in Eberbach, Germany, in collaboration with DSM. Empacher supplies boats to a large number of crews rowing in international competitions, including the World Championships and the Olympics. In many cases, the company makes modifications and personalizes its boats to meet the wishes of individual teams and rowers. Hence when DSM  - supported by the Dutch Rowing Federation and Olympic Team Netherlands - approached the boatbuilder with a 'wish list' regarding the materials to be used, together with specific instructions on how these were be applied, Empacher had no problems complying.

The Dutch crews trained in prototypes of the new boats for months, providing valuable feedback for the construction of the final Olympic boats. However, the project remained top secret, until the beginning of May, when the new boats were unveiled.

Due to the use of DSM's newest developments in resin technology, combined with carbon fiber of the highest standards - Oxeon's TeXtreme carbon fabric - the new Olympic boat carves through the water in a subtler manner. The stiffness of the hull has been increased by 25% compared with regular boats, while maintaining an extremely lightweight structure. The increased stiffness reduces the amount of energy that is lost due to deformation of the hull, a common issue resulting from the force used by the crew during each stroke. Reducing the deformation of the hull means that the crew can more effectively build up and maintain better speed.

Moreover, the styrene-free Turane resin used for the boats is a new DSM development. Providing the same performance as regular resins, DSM says that Turane is a sustainable product made of relatively environmentally friendly raw materials. No harmful fumes are released during production. With the development and use of this resin, DSM has also signaled its support for the 'clean water' sustainability objectives of the international rowing federation FISA.

So far, so good
Both the DSM boats have successfully reached the finals, which will be rowed in a few days from now. It's good news for DSM, which sees the Olympics as a "showcase" for its innovative capabilities.

Obviously, however, it's a team effort. In an interview with the BBC, Elvira Luykx, Director of Media Relations & Sponsoring at DSM said: "The athletes must be healthy, mentally fit, they must have the right coaching, everything must be right to row that race for the medal - the lights must be green, as green as possible to make it all come together. What we do is just one part of it."

The Men's Lightweight Four semifinals were held on July 31, with the Dutch finishing in third behind Great Britan and the Swiss, 1.69 seconds behind the British. The final will be held on Thursday August 2, with the Dutch taking on the British, Swiss, French, Danes, South Africans, and Australians. The Women's Eight competition held heats on July 29, with repechages on July 31, in which the Netherlands came out on top, besting Romania and Australia. The final will be held on August 2, with the Dutch women taking on Australia, the U.S., Canada, Romania, and Great Britain.