The estimated 104,000 spectators who came to London's historic Royal Artillery Barracks in Woolwich for the London 2012 shooting competitions were greeted by a wall of polyvinyl chloride (PVC), literally, with the temporary cube-shaped structures for the 10-, 25-, and 50m shooting competitions which are clad in 18,000 sq m of white vinyl.

The estimated 104,000 spectators who came to London's historic Royal Artillery Barracks in Woolwich for the London 2012 shooting competitions were greeted by a wall of polyvinyl chloride (PVC), literally, with the temporary cube-shaped structures for the 10-, 25-, and 50m shooting competitions which are clad in 18,000 sq m of white vinyl. 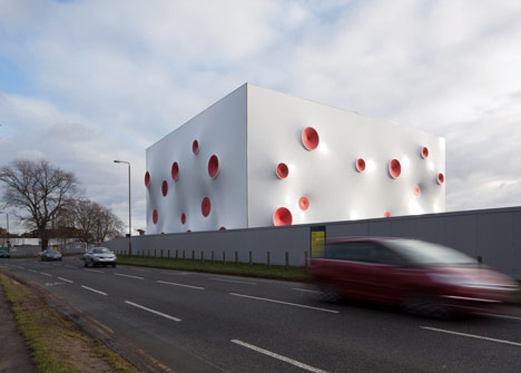 London's Olympic organizers were very conscious of the legacy that the games of the 30th Olympiad would leave behind, both in terms of the emotional and cultural imprint of the event on the country, as well as the bricks-and-mortar legacy of venues purpose-built for the Olympics. Beijing's 2008 games were truly a spectacle, with innovative and striking architecture playing a huge role, but four years on, some of the most iconic structures, including the Bird's Nest Olympic stadium have settled into disuse and disrepair.

Designed by Magma Architecture of London and Berlin, the Olympic Shooting Venue comprises three PVC tents, temporary structures that will be dismantled immediately after the Olympics and reassembled in Glasgow for the 2014 Commonwealth Games.

The decision to stage shooting at a temporary venue, versus investing in existing brick-and-mortar sites so they could host an Olympic-sized competition, was not without controversy, but in any case, the resulting designs, which rely heavily on PVC, are being touted by the vinyl community, including the European Council of Vinyl Manufacturers.

The ECVM noted that more than 142,000 sq m of PVC fabric were in the Olympic Park and external sites. A cradle-to-grave sustainable approach to the material was also taken, reflective of London's efforts to put on the greenest games ever.

ECVM noted that PVC used at the Olympics includes at least 30% recycled content, and is manufactured in accordance with the ECVM Industry Charter, which means it meets standards for effluent discharges and vent gases, and does not contain lead, mercury or cadmium stabilizers, among other substances.

ECVM: PVC at the 2012 London Olympics

After the London event, ECVM noted that all temporary structures will be dismantled and recycled, with some of that recycled PVC from London 2012 to be used in football stadiums currently under construction in Brazil for the 2014 FIFA World Cup.

In addition to the white vinyl cladding, the shooting venue has extruded red, blue and pink circles to draw ventilation inside each of the venues and also create tension nodes for the steel structure beneath the white skin. The skin also allows some natural light to permeate through.