More than 50,000 children in the United States and more than 500,000 children worldwide suffer from rare diseases and conditions that prevent them from using their arms. Magic Arms, a non-profit organization based in Minneapolis, MN, has been helping these children by providing them with 3D-printed orthotics.

More than 50,000 children in the United States and more than 500,000 children worldwide suffer from rare diseases and conditions that prevent them from using their arms. Magic Arms, a non-profit organization based in Minneapolis, MN, has been helping these children by providing them with 3D-printed orthotics. It wants to take this technology to the next level, in collaboration with 3D printing technology provider Stratasys (Eden Prairie, MN), and has launched an Indiegogo campaign to fund a complete redesign of its 3D-printed exoskeleton and to train and support other hospitals to use this technology. If successful, the online fundraiser would help more than 200 children who are currently on the Magic Arms waiting list and countless others across the world. 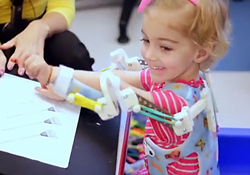 Magic Arms has its origins in 2012 at Nemours Children's Hospital in Delaware, where Whitney Sample and Tariq Rahman, co-inventors of the WREX exoskeleton, met a 3-year-old girl named Emma who couldn't lift her arms. They began to prototype a 3D-printed exoskeleton with Stratasys to help children like Emma. You can watch Emma's story in the video embedded below.

3D printing offered strong but lightweight plastic that could be customized and made quickly. "This is one of those industries that matches perfectly with 3D printing, because we need custom everything," explains Sample. It supports and balances the weight of a child's arms using a 3D-printed frame and resistance bands. Precision bearings in all joints of the device allow children to amplify their limited arm strength. As children grow, new parts can be printed or modified to meet each child's unique needs.

Since 2012, the inventors have fit more than 100 children with 3D-printed arm orthotics and worked with the medical community to prove that this is a concept that can scale. The Magic Arms non-profit was founded to broaden the scope of the technology and train and support hospitals across the world to identify children who will benefit from the Magic Arms orthotic and properly fit it to children. A redesign is needed, says Magic Arms, because the current orthotic costs approximately $7000 and is currently not covered by most insurance providers. A redesign will help lower production costs and enable more children without health insurance to have access to the device

Magic Arms, collaborating with Stratasys, aims to make the device more affordable and functional, and it plans to train five regional hospitals to help children across the United States. The Magic Arms team includes founder Eric Jenson, who owns Jenson Studios; co-founder Tom KraMer, president and CEO of Kablooe Design; and Executive Director Angie Conley, who has a background in medical marketing with Medtronic.