MakerBot, a subsidiary of Stratasys, a company that promises to make 3D printing ubiquitous as it leads the "next Industrial Revolution," announced that the new MakerBot Z18 Replicator 3D printer has started shipping to customers who pre-ordered the machine a few months ago.

MakerBot, a subsidiary of Stratasys, a company that promises to make 3D printing ubiquitous as it leads the "next Industrial Revolution," announced that the new MakerBot Z18 Replicator 3D printer has started shipping to customers who pre-ordered the machine a few months ago. 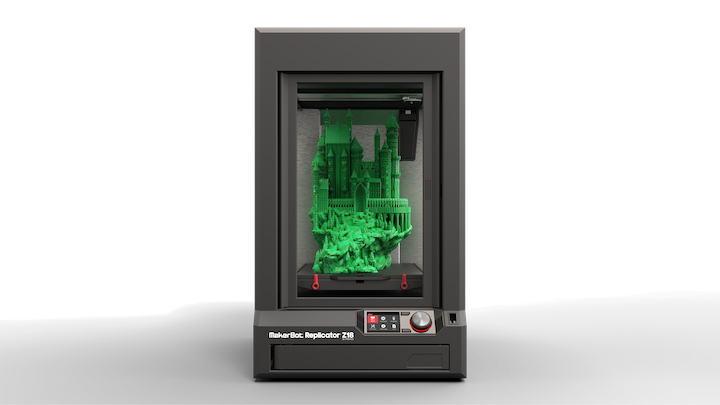 MakerBot announced the MakerBot Replicator Z18 at the International Consumer Electronics Show (CES) in January, and immediately gained recognition from the industry and the media for introducing what MakerBot believes to be one of the most anticipated disruptive products of the year.

"The MakerBot Replicator Z18 was named for the large z-axis that produces 3D prints up to 18 inches in height. This is a massive scale for a 3D printer and comparable to 3D printers that cost tens of thousands of dollars more," said Bre Pettis, CEO of MakerBot. "We believe that the MakerBot Replicator Z18 is going to disrupt the industry in that enables 3D printing of large-scale and complex prototypes and models that were previously out of range for the creative community, many of whom include super-users of 3D printing, the engineers, architects and educators. We are really excited to see what our customers will 3D print with it."

Larger build boxes have the desire of 3D aficionados for a number of years now, and many of the 3D printer manufacturers have raised the bar over the past year in the volume size of their machines. The MakerBot Z18 offers what the company calls a "massive build volume" of 12.0" L x 12.0" W x 18" H. Priced at $6,499, the MakerBot Replicator Z18 offers a 3.5" full-color LCD display and intuitive dial, on-board camera to enable print monitoring and easy sharing to Maker Thingiverse and social networks, and USB, Ethernet or Wi-Fi connectivity to ensure a seamless production workflow.

MakerBot Replicator Z18 uses MakerBot PLA filament, and has a "paper-thin 100-micron layer resolution" for professional-quality, high resolution prototypes and complex models, as well as smooth-to-the-touch surfaces that don't need finishing or post-production, according to the company.

More information can be found at www.makerbot.com/z18.