Material Can Shape-Shift with Stability Across Forms 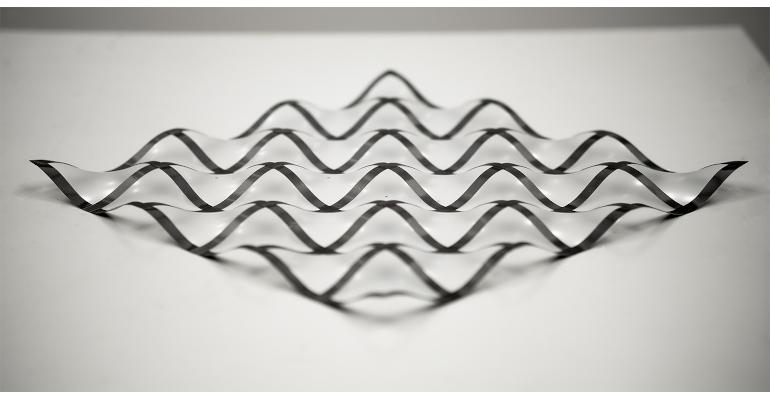 Lightweight, easy to produce, flexibly expandable and reshaped as required: these are the properties of the multi-​stable structure that Giada Risso has developed as part of her doctoral project.
A flexible, lightweight, and easy-to-fabricate structure combines materials in a unique way to shape-shift.

A researcher in Switzerland has developed a material that can change and switch between different shapes with stability, something that has been a goal of scientists for some time but until now has been difficult to achieve.

The material—which is lightweight, easy to produce, and flexible and can be reshaped as required—is the result of work by Giada Risso, who completed the research as a PhD student in the Composite Materials and Adaptive Structures Group of Paolo Ermanni at the Swiss Federal Institute of Technology (ETH) Zurich.

The material is such that if someone holds it in their hands, it can be bent from its original flat shape into one that it can maintain without further assistance, researchers said. If the material is reshaped again, it once more also will hold the new shape. It also can be restored back to its original shape in the same way.

Researchers have sought to create such a material because they believe it can be applied to a range of products that can adapt to their environment and thus simplify design or transport. For instance, one application might be objects that can change shape and take less space during transportation, researchers said.

Risso's approach veers from previous, complex solutions to the problem—which historically failed—in that it is deceptively simple to execute, she said. Previous solutions were either very complex to produce, could be reshaped only once, or required a continuous supply of energy to maintain their new shape.

The success of Risso's solution depends on the types of materials used and the way they are put together, she said. She made the material by sticking a carbon-​fiber frame onto a pre-​stretched film of polyurethane, which is remarkably easy to fabricate and reproduce—one of her "main goals" for the project, Risso said in a post on ETH Zurich's site.

“A flat surface and a clamp to pre-​stretch the film—that’s essentially all that’s needed,” she said.

The material used for the structure's frame is especially key to why the material can reshape itself with both flexibility and stability, Risso said. “Our best results have been with a composite material made from carbon fibers," she said. "This allows us to produce a structure that can actually take on multiple stable states.”

Researchers also tested other types of materials—including glass fibers and steel—for the composition of the frame. However, neither performed as well as carbon fibers in terms of stability, with steel performing the worst—in other words, unable to produce a single other stable form once the structure was reshaped, they said.

“Carbon fibers are highly anisotropic, which means they have very different properties along different axes," Risso explained in a paper about her work published in the journal Advanced Science. "In other words, they will display differing degrees of rigidity depending on the direction you bend them. It’s this anisotropy that is fundamental in creating a multi-​stable shape.”

Steel, on the other hand, is isotropic, which explains why it is not well-suited for creating multi-​stable shapes, she added.

Risso experimented with the fundamental component of the new structure—which is a square element—to test some potential uses or applications for the material. Square elements can be combined together, each taking its own variety of shapes, to form a wide variety of possible structures, she said.

Such structures have the potential for numerous applications, including in the manufacture of reconfigurable building facades or robots, Risso said. However, she believes that the aerospace industry can benefit the most in the development of antennas or solar panels that can be transported to space in one economical shape and then configured appropriately when they get there.

“This industry is already using lightweight composite materials and relies on having compact materials that are easily adapted," Risso said.

Before she finishes her doctoral degree, Risso plans to tie up some loose ends in the research and development of the material by determining mathematically how stable a structure's particular state actually is and by exploring in greater detail the speed at which the structures change shape, she said.

Researchers also do not know yet at what scale they can work with the material, something else that one day they plan to explore.

“We don’t yet know how small we’ll be able to make the individual elements," Risso said. "If we can reduce the size of these elements to within the millimeter range, I could imagine they might be useful for medical applications. But that kind of thing is still a long way off.”