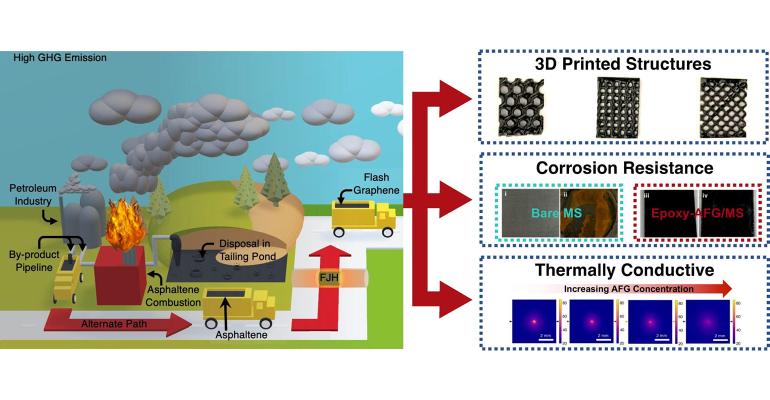 Asphaltene, a byproduct of crude oil production, is a waste material with potential. Rice University scientists are determined to deliver on this potential by converting the carbon-rich resource into useful graphene, with prospects for use in composite materials.

The process makes good use of material otherwise combusted as a fuel or discarded into tailing ponds and landfills. Using at least some of the world’s reserve of more than one trillion barrels of asphaltene as a feedstock for graphene would be good for the environment, as well.

“Asphaltene is a big headache for the oil industry, and I think there will be a lot of interest in this,” said Rahman, who characterized the process as both a scalable and sustainable way to reduce carbon emissions generated by burning asphaltene. Rahman is a lead corresponding author of the paper in Science Advances, co-led by Rice chemist James Tour, whose lab developed flash Joule heating; materials scientist Pulickel Ajayan; and Md Golam Kibria, an assistant professor of chemical and petroleum engineering at the University of Calgary, Canada.

Asphaltenes are 70% to 80% carbon already. The Rice lab combined the petrochemical with about 20% carbon black to add conductivity and flashed it with a jolt of electricity, turning it into graphene in less than a second. Other elements in the feedstock, including hydrogen, nitrogen, oxygen, and sulfur, are vented as gases. “We try to keep the carbon black content as low as possible because we want to maximize the utilization of asphaltene,” Rahman said.

“The government has been putting pressure on the petroleum industries to take care of this,” said Rice graduate student and co-lead author M.A.S.R. Saadi. “There are billions of barrels of asphaltene available, so we began working on this project primarily to see if we could make carbon fiber. That led us to think maybe we should try making graphene with flash Joule heating.”

Assured that Tour’s process worked as well on asphaltene as it did on various other feedstocks — including plastic, electronic waste, tires, coal fly ash, and even car parts — the researchers set about making things with their graphene. Saadi, who works with Rahman and Ajayan, mixed the graphene into composites, and then into polymer inks bound for 3D printers. “We’ve optimized the ink rheology to show that it is printable,” he said, noting the inks have no more than 10% graphene mixed in. Mechanical testing of printed objects is forthcoming, he said.

The research was funded by the Alberta Innovates for Carbon Fiber Grand Challenge programs, the Air Force Office of Scientific Research, the US Army Corps of Engineers, and the National Science Foundation.