Updated: The Football Helmet Is a Highly Engineered Protective Device 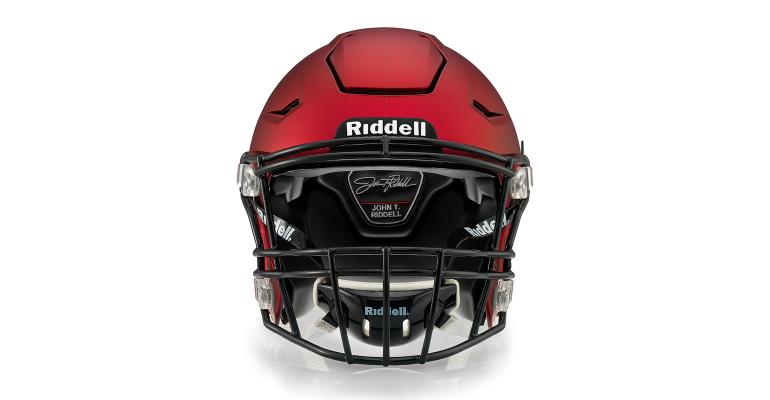 Today’s helmets are also designed with sustainability in mind — they can be reused for 10 years in reconditioned equipment.

Editor’s note: I live in the Los Angeles area, so, as you can imagine, I’m really buzzed about this year’s Super Bowl. I fully expect the Rams to be the second team in Super Bowl history to win the Vince Lombardi Trophy in its home stadium. (The first time that happened, of course, was last year when Tom Brady added yet one more notch to his GOAT belt.) Speaking of SoFi stadium — at $5 billion, the most expensive arena in the world to build (and, anecdotally, to attend) — I just learned the role that some strategically placed transparent ethylene tetrafluoroethylene (ETFE) panels in the roof play in letting all that Southern California sunshine in. The roof is made from a combination of white anodized aluminum on the sides and ETFE panels over head, writes Carolina A. Miranda in today’s Los Angeles Times. “The aluminum gives the building a reflective quality in the afternoon light, while the ETFE panels allow for sunlight to permeate the structure, limiting the use of artificial illumination during the day,” writes Miranda. This design element aligns with one of the architectural mandates — bringing the outside in. And, yes, plastics helped to make that possible. Plastics also fundamentally shaped football helmet design, and as we look forward to Super Bowl Sunday, it seemed fitting to reprise Geoff Giordano’s piece on the evolution of the helmet. Enjoy! Oh yes, and go Rams! — Norbert Sparrow

The modern-day football helmet is not only a far cry from the leather helmets common in the game’s earlier days — it’s also a vastly more engineered protective device than even 10 years ago.

Plastics are integral to the contemporary football helmet, and they are being supplied with an eye toward circularity, capable of being reused for 10 years in reconditioned equipment.

The plastic football helmet was invented by Riddell in 1939, but it was not used until after World War II because of material shortages. The suspension system of John T. Riddell’s company found its way to the battlefield before the gridiron in the form of the Army’s then-new M1 helmet.

Fast forward to today’s gridiron, and football helmets continue to evolve as fast as the game itself.

Riddell uses a combination of plastics in many of its helmet components, according to Thad Ide, Riddell’s Senior Vice President, Research and Product Development. They include thermoplastics — polycarbonate alloys, ABS alloys, TPUs, and ionomers — for the shells, facemask coatings, interior components, and attachment hardware; thermoset plastics such as foamed polyurethane for shock attenuation; and reactive polymer paints.

“These have evolved over the years in many ways,” Ide explained, “such as durability and processability of the shell materials and facemask coatings; impact response for cast polyurethane; and decoration aspects associated with paints.”

Riddell works closely with its materials suppliers “not only to achieve certain material property goals with respect to durability, longevity, and impact attenuation,” said Ide. “We challenge our suppliers constantly to improve key properties to meet Riddell’s goals of protecting athletes and helping them perform their best on the field.”

Tackling Industry 4.0 imperatives head on, Riddell automates many of its assembly operations. Its injection molding and foam casting processes, as well as post-process drilling and trimming of some components, are performed almost entirely with robots, Ide said. “However, building and assembling new football helmets and reconditioning helmets after a season of play are manual, craftsman-like processes due to the custom nature of the product. Helmet size and style, facemask style and color, choice of accessories, and decoration specifications are all individual to the customer.”

“We have a number of 3D-printing devices in-house that are constantly in use,” he said. “We also use outside FDM and DLS services when the application calls for it. More recently in 2019, we launched a line of helmets — our SpeedFlex Diamond series — with internal liner components made of lattice structures produced using Carbon’s additive manufacturing equipment.”

Rounding out the circular approach to its product’s life cycle, Riddell maintains a rigorous recertification program.

“Riddell chooses materials that can be reconditioned and recertified as long as they can meet our goals around athlete protection,” Ide said. “We believe that it is important to our customers that helmets be cleaned, sanitized, repaired, redecorated, and recertified annually for up to 10 years rather than discarded after a season or two.”

With regular reconditioning and recertification, he continued, “football helmets are eligible for use on the playing field for 10 years. In turn, this keeps recyclables and otherwise repairable equipment out of landfills and helps our customers achieve their own sustainability efforts, which are increasingly more important within the marketplace.”