Global demand for high-density polyethylene (HDPE) is expected to grow 4.2% on an average annual basis through 2022, with Asia Pacific remaining the largest consumer of the material, says market research firm Ceresana (Constance, Germany). North American exports of HDPE will rebound during the study period, whereas Western Europe increasingly will become an importer because of the closure of production sites and lack of capacity increases, according to Ceresana, which has just published the third edition of its global HDPE market study. 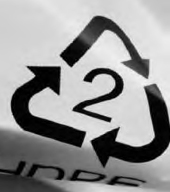 A versatile material used in everything from milk containers and water pipes to fireworks, HDPE achieved global sales of $61.8 billion in 2014, according to Oliver Kutsch, Manager, Ceresana. Given the projected 4.2% growth rate, HDPE sales are expected to total $85.8 billion by 2022.

The Asia-Pacific region is, by far, the most voracious consumer of HDPE. Within the last eight years, it has increased its world market share from 33% to 44%, says Ceresana. Growth will continue into the foreseeable future, but at a slower rate than in the past.

Demand for HDPE also will grow in Eastern Europe and the Middle East, with the latter the largest exporter of the material at around 4.8 million tons per year. The markets in North America and Western Europe shrank over the last few years, adds the consultancy, but it predicts a turnaround for North America over the next several years.

North America will increase its net exports over the next eight years by as much as one million tons, according to Ceresana. Meanwhile, HDPE output in Western Europe will decline as production sites are shut down and capacity stagnates, making the region increasingly dependent on imports. In all other global markets, production is expected to grow. The largest increases will come from Asia, the Middle East and North America. Africa and South America will have the highest growth rates, because of their relatively low starting points.

Including swing plants, which can produce HDPE as well as linear low-density polyethylene (LLDPE), global production capacity for HDPE was approximately 57.5 million tons in 2014. Numerous HDPE plants will be coming on stream in the coming years. Although there are still some small providers, the 15 largest companies (including joint ventures) account for 57% of global capacity. Market concentration is expected to continue.

HDPE is primarily used to produce packaging films, bags and sacks. In 2014, rigid packaging accounted for approximately 26% of total HDPE consumption. Pipes and cables for the construction sector are also a significant application.

In Asia-Pacific, extrusion dominates as a processing method, because of the high rates of film production and strong construction demand. In North America and Western Europe, HDPE is mainly processed by means of blow molding and injection molding.

The 460-page HDPE market study can be purchased on the Ceresana website.