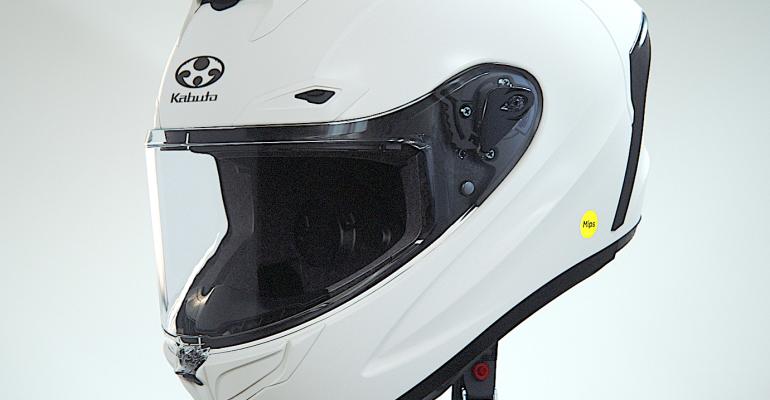 The Kabuto F17 Racing Mips is the first MotoGP helmet to employ the Mips safety system.
Mips helmets do more than just cushion impacts to protect the wearer’s brain.

The function of a helmet is sometimes thought of as armor, where a rigid outer shell protects the wearer from intrusion. Other times it is thought of as a sort of pillow, meant to cushion the blow to the head.

Maybe, in these paradigms, the ideal helmet design would be a medieval knight’s helmet stuffed with padding, to serve both functions. The trouble is that while this could protect from intrusion and direct impact, it fails to consider a considerable source of brain injury: rotation.

The classic knock-out punch in boxing is a hook that connects from the side and violently swivels the opponent’s head around. The resulting concussion in such events comes from the rotation of the brain inside the skull, which tears neurons.

Head rotation can induce brain injuries in many sports and industrial activities, so Sweden’s Mips has developed a helmet liner technology that lets the helmet provide some slippage that absorbs rotational force, minimizing the brain-scrambling effect of rotation in a head impact.

“Rotations are the major cause of brain damage,” explained Daniel Lanner, Mips science project manager. Mips stands for Multi-directional Impact Protection System, which is the company’s technology for a thin plastic helmet liner that provides for some slippage between the head and the helmet to reduce the rotational force on the head. “Allowing the brain to slide you can avoid transmitting that kind of violence,” he said. “Mips’ liner allows the outer shell of the helmet to slide.”

The total movement permitted is between 10 and 15 mm and occurs during the first 5 to 10 milliseconds of the impact event.

The company started out actually making and selling entire helmets for the equestrian industry in 2007 before deciding to focus on developing and licensing the know-how of anti-rotational technology to helmet-making clients. Its first licensed third-party helmet was a snow sports helmet in 2009.

Now, the company addresses the motorcycle, cycling, snow sports, equestrian, rock climbing, construction, and hockey helmet industry segments. The dynamics of automotive motorsport impacts aren’t as suited to the technology, while the high-profile market of American football is “too litigious,” according to Mips CEO Max Strandwitz.

The injuries that cyclists commonly suffer are especially likely to be related to excessive head rotation, making Mips’ technology more beneficial than in some other applications, Begonia reported. “I can say the bike helmet industry for sure, some type of technology that mitigates that head rotation is beneficial.”

Begonia says “some type of technology” because while Mips pioneered research into the importance of minimizing rotation in the early ‘00s, others such as WaveCel and Rheon Labs have since joined the cause.

But Mips has a testing lab and conducts continuing research to advance the state-of-the-art, making licensing Mips’ technology an attractive solution for helmet makers. For example, industrial construction helmets were not considered an obvious application to benefit from protection from rotational injuries, but Mips’ research found otherwise. 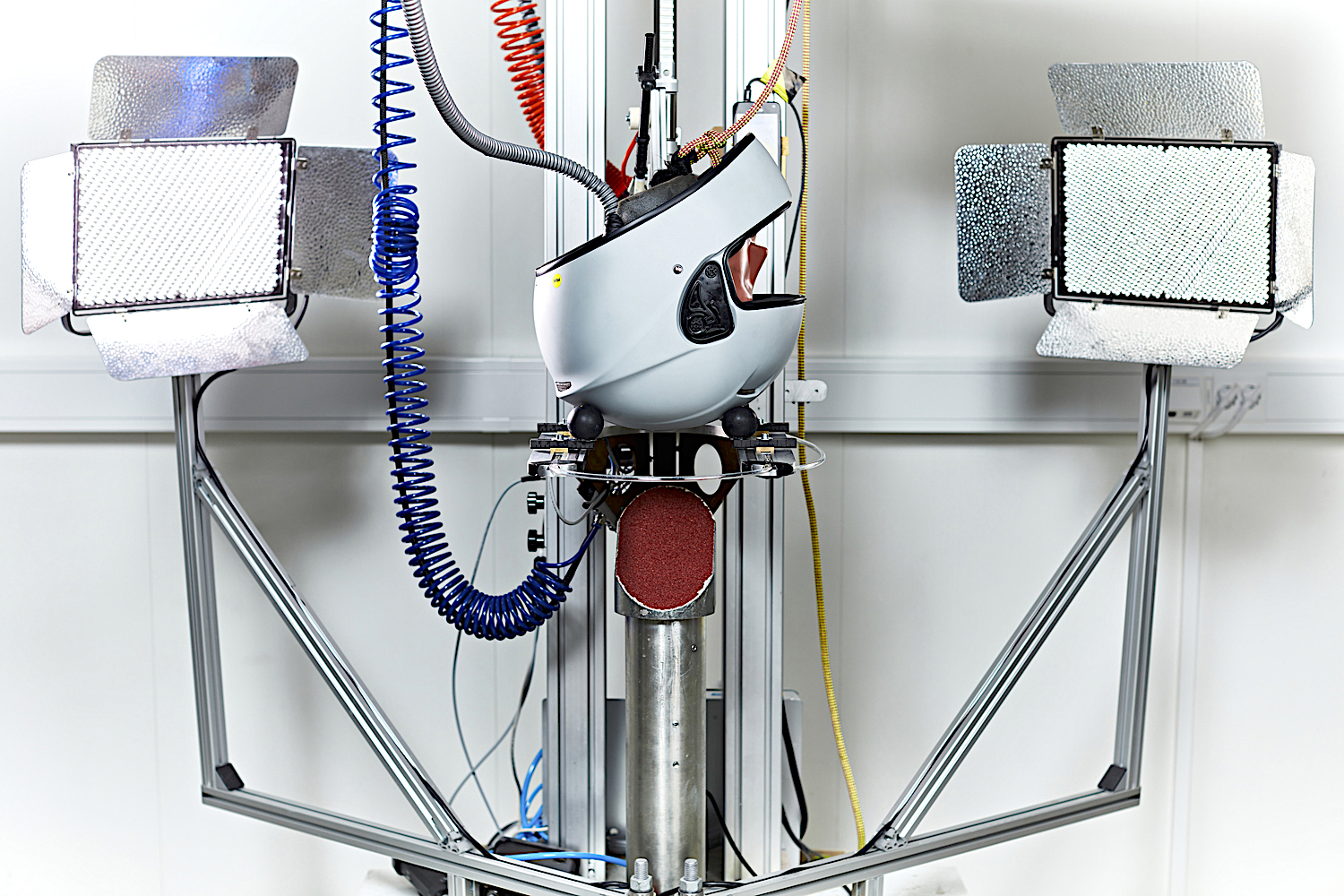 The Mips test lab prepares to test a motorcycle helmet using a drop test against an angled target that induces rotation in the head form.

“We didn’t think there was too much tangential force in safety,” recalled Strandwitz. Then the company examine the circumstance of head injuries on construction sites and found that 15 percent of injuries were the result of the person being struck by a falling object, 20 percent struck by some other moving object, and 60 percent from falling. “Then we realized we have a big job to do also in construction,” Strandwitz explained.

Hockey, on the other hand, is a sport where protection from rotation may be less helpful. So far Mips has only licensed one company to use its technology in hockey helmets, and Virginia Tech’s testing found that particular helmet didn’t fare as well as others in its testing. That’s because the quality and the construction of the helmet in which the Mips slip liner is installed remains crucially important, said Begonia, and employing Mips’ technology in a lesser helmet won’t change that.

“You’ve got to tease out the [protection of the] helmet by itself in the absence of Mips. Considering Mips as a magic bullet for helmets that may not fit as well or that have inferior retention systems could cause “the message about rotation to get lost a little bit,” Begonia worried.

Mips can help helmet makers evaluate the quality of their products through its test lab. While a helmet company might have trouble justifying the cost of operating such a lab in-house for only its own products, Mips’ lab serves as a resource for the whole industry, amortizing the cost of its equipment and staff across all of its customers so the service is more affordable. 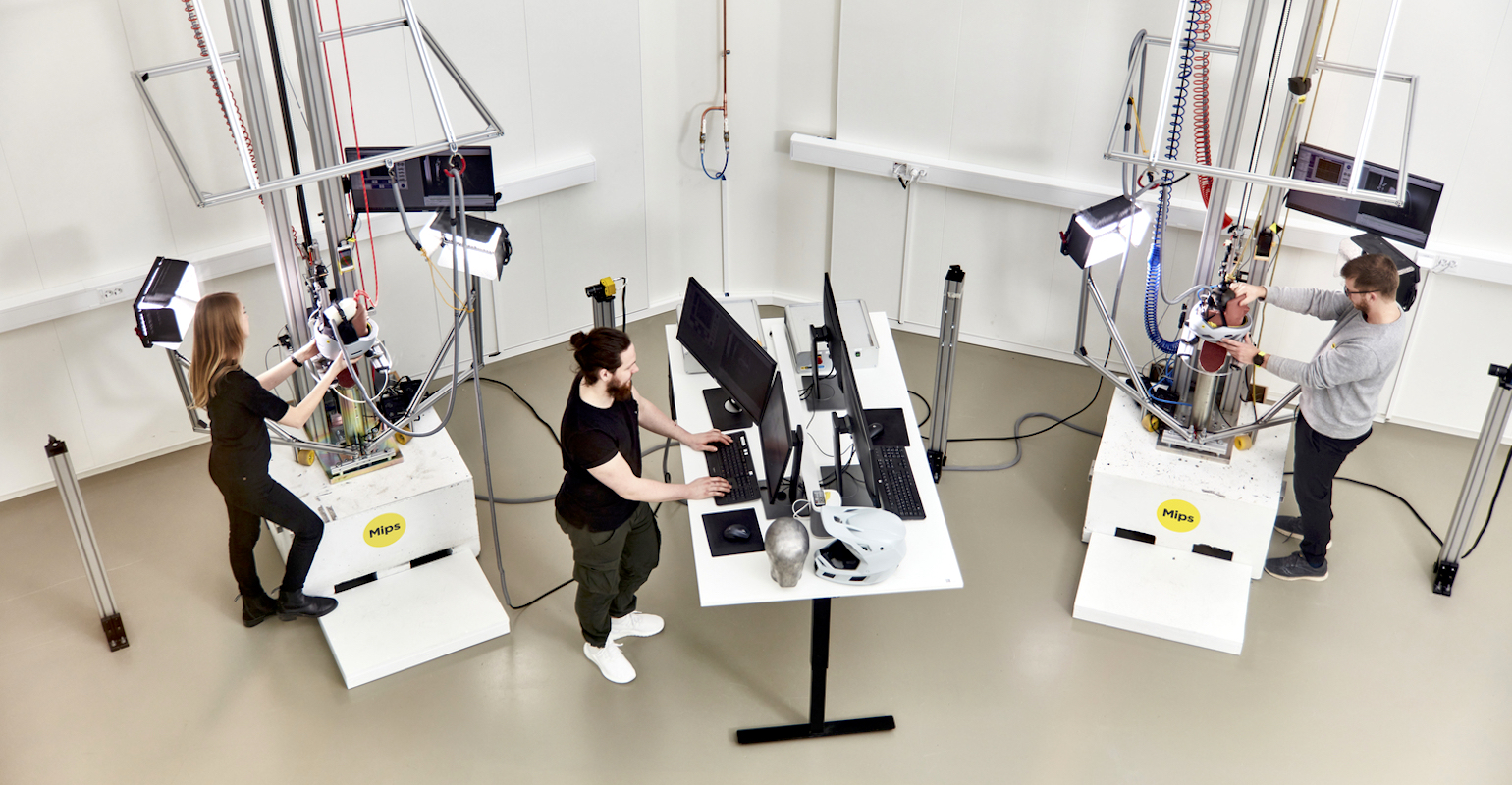 Mips lab technicians work on a variety of tests for helmets.

This is how Mips shows companies the difference between the performance of their helmets with and without the addition of the Mips liner system, said Marcus Seyffarth, head of the implementation team. The helmets are tested beforehand to determine the performance of the retention system before they advance to the Mips impact test.

The best way for helmet companies to optimize their helmets for use with the Mips liner is through virtual modeling, which is a faster and cheaper solution than physical testing to refine a helmet’s design, according to Mips science project manager Lanner.

“This is the way the helmet industry has to go,” he said. “We are trying to get finite element analysis for a helmet down to a reasonable amount of time. We’re doing it in two to three weeks now instead of six months. That is a great success for us. We strongly believe this is something we need to be able to do to develop products faster, cheaper, and in a more sustainable way.”