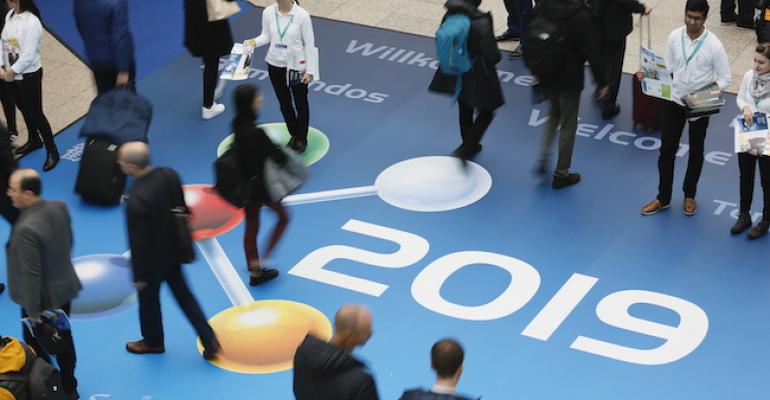 The show was an unqualified success, welcoming approximately 225,000 visitors and more than 3,300 exhibitors from across the globe.

It’s official and, to be honest, quite predictable: K 2019 was an unqualified success. The plastics and rubber trade show in Düsseldorf, Germany, from Oct. 16 to 23 attracted approximately 225,000 visitors from 165 countries, according to Messe Düsseldorf. They ogled stunning displays from the likes of Sabic—featured as one of PlasticsToday’s coolest things at the show—and Reifenhäuser—check out the video below—and kicked some tires as they pondered purchasing new plastics processing equipment. Visitors had an embarrassment of riches from which to choose: Organizers said that 3,330 exhibitors from 63 countries took part in this year’s event.

Members of the press were keenly interested in learning about new technologies, and the K, as always, did not disappoint. Stephen Moore and I combed the aisles and attended what seemed like wall-to-wall press conferences hunting down news for PlasticsToday readers. Articles that we posted leading up to, during and after the show are archived at www.plasticstoday.com/k-show. You will find some interesting reading there, including reports on how blockchain can be be applied to plastics traceability and sustainability, why Lanxess is using artificial intelligence to accelerate materials development, and the shape of cars to come. But wait, there’s more.

Following the K, I took a one-week vacation in Paris. With apologies to Charles Aznavour, it was “for me, for me, formidable.” Thanks for asking. On the downside, though, I wasn’t able to report on some innovations I discovered the second week of the show and share conversations I had with exhibitors . . . until now. Turn the page.

Sustainability was the buzz word at K 2019, as we noted it would be ahead of the show. ExxonMobil (Irving, TX) was rigorously on message with a number of innovations and projects designed to advance the circular economy.

The chemicals giant announced at the event a collaboration with plastics extrusion company Reifenhäuser to produce new heavy duty sacks partly using recycled polyethylene from former sacks without sacrificing performance, even when fourth-cycle recycled PE is used. It also introduced Rethink Recycle technology with Vistamaxx performance polymers that enables increased use of recycled content in high-value applications. A key environmental benefit is that addition of Vistamaxx acts like a “compatibilizer” between PE and PP—the incompatible plastics mix in the melt, reducing the need for separation of the materials in preparation for recycling. The technology is being used in Patagonia to convert discarded plastic fishing ropes into high-quality end products. Closer to home, ExxonMobil also has collaborated with three partners to produce stand-up pouches (SUPs) made partly from recycled material from full-PE-laminated SUPs. The packaging is fully recyclable at the end of its life cycle.

Flexible packaging typically requires different material layers to meet a range of property requirements, including stiffness, toughness and sealing and optical properties. Multi-material packaging, however, is difficult to recycle. ExxonMobil’s solution is an SUP made from a combination of 30% recycled material from a full-PE-laminated SUP and 70% virgin PE. The technology came about through a collaboration with Erema, Henkel and Hosokawa Alpine.

“We are committed to doing more with less at ExxonMobil,” Adeline Duponchel, Market Development Manager for PE in Europe, Middle East and Africa, told PlasticsToday. Recycled full-PE-laminated packaging furthers that commitment by using recycled PE from existing packaging in combination with performance PE polymers to manufacture new SUPs, she noted. The properties of the packaging with recycled content are not 100% identical to those using only virgin resin, conceded Duponchel, but they are more than good enough in terms of stiffness, toughness and shelf appeal. And they are recyclable, moving industry closer to the goal of circularity of flexible packaging.

Sustainability was also a key feature at the Nova Chemicals (Calgary, AB) stand, which it shared with Borealis and Borouge. All three companies have a shared ownership but operate independent of each other, although they are pooling their resources and expertise in Project STOP.

“The initiative was co-founded in 2017 by Borealis and SystemIQ to bring circular economy solutions to cities in Southeast Asia with poor or mismanaged waste infrastructure programs,” Sarah Marshall, Director of Sustainability at Nova Chemicals, told PlasticsToday. The goal is to prevent plastic waste from ending up in marine environments by “engaging with communities and developing stable, long-term solutions to waste management,” she added.

The program has now expanded to three cities and has welcomed the Alliance to End Plastic Waste as a strategic partner. The three-year partnership will focus on the regency of Jembrana on the northwest coast of Bali and study the feasibility of achieving a future free of unmanaged plastic waste throughout the island. Nova Chemicals is a founding member of the Alliance to End Plastic Waste, added Marshall.

Sabic (Riyadh, Saudi Arabia) sees the adoption of 5G wireless technology as critical to enabling many new application areas, notably in remote healthcare, and it sees opportunities for its materials in this fast new world.

Lower latency will provide an almost instantaneous transmission of high volumes of data between devices, noted Sabic in its press release, enabling surgeons to remotely conduct procedures as if they were physically next to the patient. This evolution will stimulate the increasing adoption of robotics in surgical instrumentation, allowing doctors to perform surgery remotely from anywhere in the world, said Sabic.

Sabic believes that this trend can lead to growing use of its Ultem resins, LNP compounds and co-polymers in internal and external parts of next-generation surgical instruments because of their desirable properties, such as biocompatibility, lubricity, sterilization compatibility, and certification that can assist manufacturers in achieving regulatory compliance.

Just before K 2019 opened its doors in Düsseldorf, Germany, injection molding machine maker Stork Plastics Machinery (Hengelo, Netherlands) announced that Hydratec Industries was in far-reaching discussions to acquire a 75% interest in the company. Hydratec operates in the industrial systems and components space, serving the agricultural, automotive and healthcare markets. The remaining 25% share would remain with current shareholder Wadinko, a financial services company.

The half-century-old Stork is one of the smaller players in the injection molding machine marketplace, but it has earned a global reputation, particularly for its large-tonnage, high-cavitation, thin-wall packaging machines, said Benjamin Sutch, Managing Partner at Chudleigh Sutch UK Ltd., which represents the company in foreign markets. It started working with Stork in Asia/Pacific about three years ago, Sutch told PlasticsToday from the Stork stand at K, and is now seriously looking at establishing a footprint for the company throughout North and South America.

“We are actively seeking sales and service partners in the Americas and, indeed, several are ready to come on board,” said Sutch. “It’s very important to Stork to have live, zone-sensitive service for its customers.”