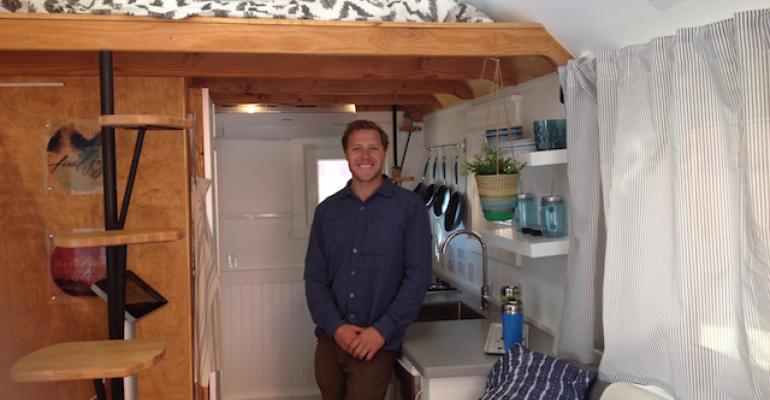 America is downsizing. At least, that's what it seems like from an LA perspective. SUVs are learning to play nice with smart cars and Fiat 500s; cars of all shapes and sizes are sharing the road with bicycle riders around the city; and who would think to order a Big Gulp in a non-ironic way? Even hostile or unwelcome behavior has gone small, as in micro-aggressions (my favorite new word). And then there's the Tiny House Nation, a movement that celebrates living in a very snug version of the American dream.

, a movement that celebrates living in a very snug version of the American dream. Zack Giffin, who co-hosts the FYI Network show, was in town to promote the opening of an energy-efficient tiny house exhibit at the California Science Center in Los Angeles. The exhibit, which is an initiative of the Plastics Make it Possible program from the American Chemistry Council, is open to the public for the next three months. 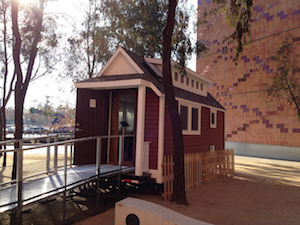 Plastics are used throughout the tiny house—from solar shingles on the roof and polyurethane spray foam insulation to cross-linked polyethylene plumbing and vinyl windows—to improve energy efficiency. The take-away for visitors to the exhibit is that all of these features can be applied to a house of any size to measurably reduce the carbon footprint. It's worth doing: The U.S. Department of Energy estimates that houses and buildings in the United States consume a whopping 41% of our nation's energy. The judicious use of plastics and renewable energy can slash that rate.

Giffin, an extreme skier, has been living in a 112-square-foot house for a couple of years. He parks it near the slopes, and the resorts generally don't mind because, says Giffin, it's adorable and built of high-quality materials. But the tiny home movement also has converts in the cities. Some see a viable alternative to rentals, which have soared in cost in recent years because of the housing shortage. The movement also attracts individuals committed to making sustainable lifestyle choices and not wasting resources. "The environmental benefits are one thing," Giffin told PlasticsToday, "and the economics are another, but it's also about reducing the clutter and enabling an adventurous lifestyle that can get you off the grid. All of that, and it's a home you can be proud of."

Through the TV show and his public appearances, Giffin wants to educate, not just consumers, but also industry.

"Early on, I was surprised to learn that recyclable materials for building and construction were not as readily available as I thought," Giffin told PlasticsToday. "Part of what I'm trying to do is inform manufacturers that this is a legitimate market they need to serve." On the demand side, he wants to encourage "consumers to look at the options," and the house that he helped construct for the Plastics Make it Possible exhibit is designed to raise that awareness.

In addition to the material's durability—"the house has traveled thousands of miles without a crack in the drywall thanks to the rigidity of the spray foam insulation"—and its light weight—"especially important when you're towing"—it enables "so many aspects of energy efficiency." Giffin notes that the thermal envelope was especially important, and that relies on "several small pieces that come together to produce a secure, well-insulated home, from the plastic front door to the insulation. People don't think about all the little pieces that can go together to create an energy-efficient home."

Specifically, those pieces in the tiny house on display at the Science Center include:

Despite the abundant use of plastics, the interior feels cosy, and that is deliberate. "We don't want people to feel like they are living in a plastic bottle," says Giffin, and wood furnishings and trimming exude warmth and comfort.

The cost of a tiny home can vary between $30,000 and $75,000, depending on the amenities and how much elbow grease you want to put into it yourself, but for Giffin, $50,000 is a good benchmark for a tiny house that, well, feels like home.