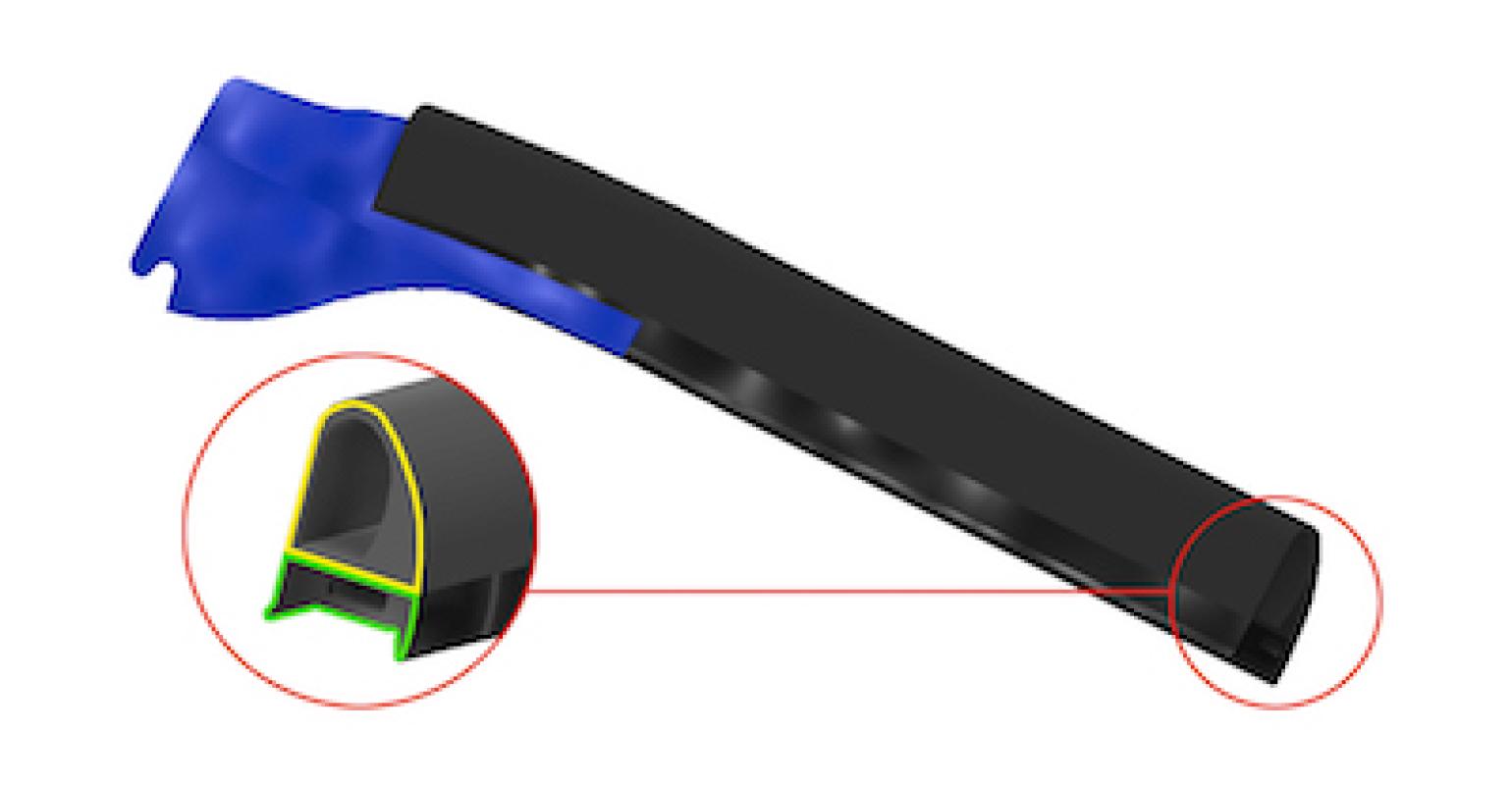 The new compounds are primarily intended for automotive applications such as window trims and sealing profiles made of EPDM with molded corner joints and end elements made of TPE.

The automotive industry is the largest and fastest-growing market for thermoplastic elastomers TPEs. Kraiburg TPE has identified an increasing demand for TPE compounds for high-quality exterior applications and has speeded up its application-specific development of efficient TPE solutions for this industry.

The latest developments include TPE compounds featuring adhesion to ethylene propylene diene monomer rubber (EPDM). The materials from the Thermolast K series have been specially developed for two-component parts used for automotive exterior applications and feature good adhesion to EPDM and excellent UV resistance. The new compounds are primarily intended for automotive applications such as window trims and sealing profiles made of EPDM with molded corner joints and end elements made of TPE.

Grades TC7EAZ and TC7EFZ with adhesion to EPDM combine good adhesion properties to EPDM with excellent long-term resistance to UV radiation and thermal effects with a hardness of 70 Shore A. Weathering tests have shown that the surface quality of  Kraiburg TPE compounds is superior to that of competing materials. In developing the individual compounds, the TPE specialist focused on adhesion (TC7EAZ) and processability as well as on low fogging values (TC7EFZ).

Particularly with large vehicle series, styrene-butadiene compounds (SBC) and crosslinked thermoplastic vulcanized (TPV) rubber have mainly been used for these applications in the past. Because the geometrical designs vary between the vehicle series, cost-effective processing of these materials is limited. Kraiburg TPE’s material solution, with adhesion to EPDM when processed by injection molding, offers new opportunities.

The application of the advanced EPDM adhesion series has been successfully tested in practical collaboration with LWB Steinl, a machine manufacturer, as well as in comprehensive laboratory tests and customer tests. To start with, the focus was on adhesion to EPDM. In addition to adhesion tests of EPDM/TPE specimens in accordance with the common VDI-2019 standard (at ambient temperature and after 1,500 hours at 90°C), tests based on ISO 37 were also performed. Along with tensile stress and percent elongation, the absolute force required to destroy the specimen was determined.

In these adhesion tests, the new materials received good results with both foamed and compact EPDM workpieces. The initial adhesion plays a decisive role in allowing the finished parts to be easily removable from the mold with the shortest possible cycle times. In addition, the test series showed that adhesion mainly depends on the cleanness of the inserted EPDM profiles. To achieve optimal and reliably reproducible results, the profile parts should be cut within as short a time as possible before the TPE component is molded – the fresher the cutting, the better the adhesion.

The key requirements for exterior vehicle components also include lasting heat resistance and weathering resistance even with increased UV radiation. This was simulated by exposing material specimens to hot air in accelerated aging tests (1,500 hours at 90 °C and 120 °C) and to environmental conditions resembling those in Florida (heat and humidity) and the Kalahari Desert (heat and drought), for example, in weathering tests. In all of these weathering tests the AD/EPDM/UV series proved to have stable mechanical properties and featured significantly dry and non- adhesive surfaces.

Kraiburg TPE partnered with LWB Steinl GmbH, based in Altdorf near Landshut, Germany, to ensure stable processing of the new AD/EPDM/UV compounds through a thorough investigation of their processability.

LWB Steinl is one of world’s leading global manufacturers of vertical transfer molding presses and horizontal injection molding machines for rubber and TPEs. Its range of products includes versions with a clamping force of 200 to 16,000 kN and energy-efficient injection units for injection volumes of 50 to 30,000 cm³. A vertical machine without tie bars was used for the tests performed in the manufacturer’s processing laboratory. The test tool was delivered by PFAFF Werkzeug- und Formenbau from Röthenbach, Allgäu, Bavaria.

The economic processing of EPDM/TPE components with a vertical machine has the advantage that it saves space for feeding and downstream machinery. However, it also requires particularly carefully coordinated process controlling of the materials used. The special TPE formulation makes it possible to minimize the hold pressure in order to avoid deformation of the EPDM workpieces.

Although it might seem like a good idea to make the corner and end parts of the automotive sealing profiles out of the EPDM which is used for the window trims, that would result in longer cycle times due to the rubber’s crosslinking and would require more complex machines and processing steps.

Increased process stability means lower scrap rates and is one of the most important factors for economically produced two-component parts. Reducing the typical cycle time for TPE injection into inserted EPDM workpieces was therefore an additional goal for the partners involved in the project.

Kraiburg TPE’s new EPDM adhesion compounds also feature economical processing. They are processed at relatively low temperatures of 200–220°C. This results in lower cooling times, which, in combination with the minimized hold pressure time, accelerate the cycle and thus the overall production process as well. Along with these properties, the initial adhesion of the specially developed TPE compounds to EPDM materials ensures that the finished parts can be removed from the mold more easily and thus also reduces the cycle times.

Together with LWB Steinl, Kraiburg TPE has managed to optimize the material and process technologies in such a way that they meet the requirements of different automotive window systems. The permanent adhesion and weathering resistance of the materials is not impaired.

This is an abridged and edited version of an article authored by Josef Neuer, Head of Product Management, Kraiburg TPE, and co-authored by Dr. Frieder Vielsack, Head of Advanced Development at Kraiburg TPE.