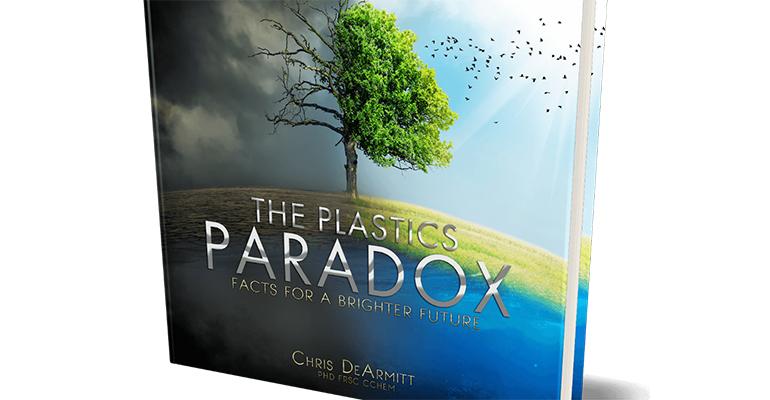 One of the tomes advocates for plastic-free living; the other takes a science-based approach to “mythbusting” common beliefs.

Two new books came out recently by two authors with two very different viewpoints on plastics. In the first corner is Say Goodbye to Plastic: A Survival Guide for Plastic-Free Living, written by Sandra Ann Harris. In the other is The Plastics Paradox, authored by Chris DeArmitt, PhD, a plastic materials scientist. Are you ready to rumble?

Harris is the founder of Ecolunchbox, a plastic-free company that she started in 2008 “to empower people to say goodbye to plastic.” That message is amplified in her book published by Heatherleigh Press in Hobart, NY.

The quest to become plastic free began when Harris tried to find a lunchbox for her children in 2003, but she couldn’t find a “non-toxic container that wouldn’t leach chemicals into my children’s lunches.” Harris looked for stainless-steel containers to “pair with the metal water bottles,” but to no avail. She couldn’t find anything without plastic. “I settled on a few, very small Tupperware containers made out of rigid plastic. I thought this type of plastic was less likely to have toxins than soft plastics like Ziplocs,” said Harris.

Harris’s book takes the reader on a tour of a typical  home, pointing out the many items in every room that should be eliminated. The kitchen is a biggie, of course. Just look around your own kitchen and you’ll find myriad utensils made out of plastic.

Still looking for plastic-free container options, Harris has come upon silicone. “Silicone,” she explains, “is made from silica that is found in sand. It lasts much longer than plastic and can withstand extreme changes in temperature, so if it’s lost in the environment, it won’t break into smaller pieces and accumulate within living organisms like plastic.”

I hate to burst Harris’s bubble but glass actually is made from silica sand, which is becoming in short supply. Silicone is a synthetic rubber-plastic hybrid. The website lifewithoutplastics.com notes: “The plastics industry considers silicone a plastic and so do we, regardless of much of the green marketing claiming it is not plastic. Technically, silicone could be considered part of the rubber family and is used to make malleable rubber-like items, hard resins, and spreadable fluids.” Another website, treehugger.com, says, “Silicone, [the plastics industry] explains, is ‘something of a hybrid between synthetic rubber and a synthetic plastic polymer,’ which means it’s still a plastic, no matter how it’s spun.”

Well, you get the drift. Harris goes from kitchen to bathroom, which also teems with toxic plastic items. The dining room and entertainment spaces are not spared; neither are the closets and clothing, as well as the laundry room and cleaning supplies. Your office and school are also places that require purging of plastics. Harris’s book is long on the horrors of plastic but short on science. Still, I found it an entertaining read.

Chris DeArmitt, PhD, FRSC, a plastic materials scientist and President of Phantom Plastics LLC in Cincinnati, presents a very different perspective in his book, The Plastics Paradox. You can get the “Reader’s Digest” condensed version at plasticsparadox.com; the unabridged version is available through Amazon. DeArmitt’s intent is to demythologize plastics and introduce the science to the public, educators, and journalists “who care enough about the environment to spend a few minutes learning the truth.”

The book is well researched, and the first chapter on plastic bags is a great introduction to DeArmitt’s engaging exploration of plastics in the environment. When he researched “plastic bag life-cycle analysis,” he found dozens of studies, 18 of which are referenced in this chapter. The studies are from Clemson University, McKinsey’s Lifecycle Analysis (LCA), Danish EPA, and more. DeArmitt notes that this is the largest collection of LCA studies on this topic. Why did he go to so much effort? “It is an important topic because people are convinced that plastic is harming our environment,” he says. “Because the findings go against popular opinion, there is an added burden of proof when trying to dispel the myth that has evolved around the topic. . . . The conclusions are unanimous and solid. PE and PP bags are far greener than the alternatives being thrust upon us.”

As I’ve said dozens of times in my blogs: It’s not a plastic problem — it’s a people problem!

DeArmitt has a very interesting chapter titled, “Ocean Plastics.” Interesting because, DeArmitt points out, the oceans are littered with everything including sunken ships — some of which were intentionally scuttled to help build reefs so that divers could explore ships, such as Gen. Hoyt S. Vandenberg from WWII.

The Great Pacific Garbage Patch that gets so much attention isn’t what you think it is, writes DeArmitt. What we aren’t told is that the 80,000 tons of material in this gyre is “mostly abandoned fishing gear,” such as nets. “It’s not all [plastic] bottles and straws,” he writes. The fishing industry is “clearly at fault,” he says, referencing an AP article from June 28, 2019: “40 Tons of Fishing Nets Pulled from Great Pacific Garbage Patch.”

What about the turtles? DeArmitt researched this and said that it was never determined that a plastic straw was lodged in that turtle’s nostril. It was 15-cm long and brown, but “it turns out they never analyzed the object as any professional scientist would do. I don’t think we should be banning plastic straws all around the world based on one unsubstantiated YouTube video. Do you?”

DeArmitt also discusses the issue of plastics in global river environments and beach litter, which again, he notes, is about changing individual behavior to keep litter of all types from the environment.

A chapter on microplastics and the safety issues that plastics detractors have raised rightfully notes: “If using plastics really did present a significant risk of danger, we would know by now because we would all be sick or dead.”

As an example, when DeArmitt worked at BASF, a customer demanded unrealistic low limits for formaldehyde in plastic. “Just because we now have analytical equipment that can detect molecules down to parts per million or even parts per billion levels does not mean there is a problem,” he said. “The customer’s demands for the formaldehyde in the plastic were way less than the formaldehyde you would get from biting into an apple or taking a walk in the forest. We need perspective, not knee-jerk reactions.”

Even the food we eat — no matter how natural — contains “known toxins,” said DeArmitt. He provides an extensive ingredient list of 100% natural cabbage, some of which are “cancer-causing chemicals that are manufactured by the cabbage itself.”

DeArmitt next debunks the myth of the 1,000-year-survival rate of plastics in his chapter, “Degradation of Plastics.” All plastics degrade over time, even the non-biodegradable ones, which is why plastics need additives, such as UV stabilizers, in patio furniture, for example. Living in Arizona, I know all about plastic patio furniture and the degradation of plastics!

“The green lobbyists first tell that plastic doesn’t degrade or, if it does, it just fragments but cannot chemically degrade,” says DeArmitt. “Then when they measure the chemical degradation of plastic into gasses, instead of saying ‘Hurrah, it does degrade after all!’ they say it’s terrible news, as it will lead to more global warming. So which is it? Do they want it to degrade or don’t they? Apparently, it doesn’t matter to them. They just blame plastic either way . . . typical of people who don’t care about the truth but are instead determined to demonize a material no matter what the evidence is.”

If plastics “leach” toxins and break down/fragment into microplastics, then it’s obvious that these materials actually do not last for hundreds of years, which makes one wonder why there is such a big push for biodegradable plastics as an alternative to conventional plastics.

In a chapter titled, “Corruption, Distraction, and Greed,” DeArmitt theorizes why so many activist groups are into “virtue signaling and moral grandstanding” when it comes to plastics. While he singles out Greenpeace as contributing to plastic myths, there are many other groups that also have a specific agenda with regard to plastics.

The plastics industry needs a book like The Plastics Paradox — nearly 200 pages filled with extensive studies, research, graphs, charts, scientific information, and some really beautiful photos — to offset books like Harris’s Say Goodbye to Plastic that contain misinformation and perpetuate myths about plastic that completely ignore the science. I recommend reading both.