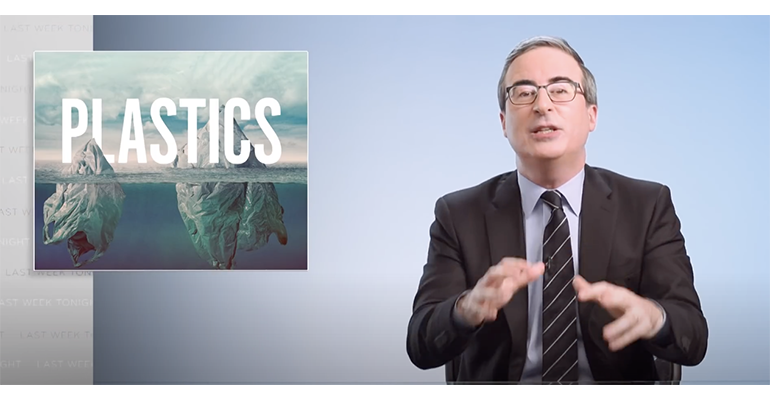 On HBO’s "Last Week Tonight," John Oliver devoted the main segment of the show to the plastics industry. Guess who got the short end of the stick?

Regular viewers of Last Week Tonight on HBO — I am one — and John Oliver fans — ditto — tend to look forward to that intro as it leads into a well-researched deep dive generously seasoned with snarky asides and hilarious digressions. When he announced the topic du jour Sunday night, though, I couldn’t help but cringe. Yes, plastics was on the chopping block, which he described as the Jane Lynch of materials. “It is incredibly versatile, appears in almost everything, and isn’t going anywhere for the next 400 years.”

That was one of many good laugh lines, but the substance of his report, sadly, was a repeat of the litany of grievances about plastic waste that have been a mainstay of the media for several years.

As is Oliver’s wont, he cited several statistics, which are and by and large fact-based. For example, he notes the paltry rate of recycling in the United States — under 9%. Also, the aisles of an Oregon supermarket were shown brimming with salads in plastic tubs that would not be accepted by curbside pickup programs in that state, even though many, if not most, consumers thought they were recylable. And, as we have noted in PlasticsToday in the past, the numbers beyond 1 and 2 inside the chasing arrows are not helpful to consumers who want to do the right thing. Few of those products can be mechanically recycled in a viable manner.

Oliver also included a short segment that began with the fish-eat-plastics-and-humans-eat-fish storyline that ended on a note that strains credulity. Citing an article from the World Wildlife Fund, Oliver said that the presence of plastics in the food we eat and water we drink could amount to a “credit card’s worth of micro plastics” in our bodies every week. C’mon man! That smacks of amped-up simulations massaged to achieve a preordained outcome.

The overarching theme of the “main story” is that people are not responsible for the plastic litter that “escapes” into the environment, which as our own Clare Goldsberry likes to point out, doesn’t get there by itself. Somebody has to put it there. The culprit, of course, is the plastics industry. Ultimately, that through line ends up where you would expect — extended producer responsibility — which Oliver talks about in the final minutes of the segment. The United States, notes Oliver citing a Time magazine article, is one of the only developed countries on Earth without EPR bills addressing packaging, “because . . . of course it is.”

I won’t go into the pros and cons of EPR schemes. Instead, I invite you to read Clare Goldsberry’s recent piece, "The Unintended Consequences of the 'Polluter Pays' Principle,” which provides an excellent counterpoint.

One glaring omission from Oliver's reportage is the promise of chemical and other forms of advanced recycling technologies in dealing with plastic waste that cannot viably be recycled through conventional methods, and the very real efforts that the industry is putting forth to reduce the amount of virgin, fossil-fuel-based plastics used in packaging and other products. I understand, of course, that doing so might have diluted some of the moral outrage directed at the plastics industry that was at the center of his piece.

That said, I do agree with Oliver on some points, notably that Totes McGoats, Niagara Falls’ recycling mascot, is an abomination. Don’t believe me? Watch the Last Week Tonight excerpt — Totes is introduced early in the segment — and tell me I’m wrong. (At this point I should note that some viewers may find the language and some of the content objectionable. It's not TV, it's HBO.)

And here’s a fun fact: At one point, Oliver calls out a random phone number on a Post-It as something you might find in your junk drawer, admonishing viewers not to call it. I didn’t, but many did, of course, and happened upon the “Callin’ Oates” emergency Hall and Oates hotline. It’s a repository of the Hall & Oates oeuvre that you can call any time, 24/7, when you have that itch that only a Hall & Oates song can scratch. Apparently, it was the main takeaway from the 20-minute segment for Matthew Dessem in a piece he wrote for Slate guaranteed to give you a good chuckle. Just like Last Week Tonight . . . most of the time.