#TBT: The Plastic Chair That Started a Movement 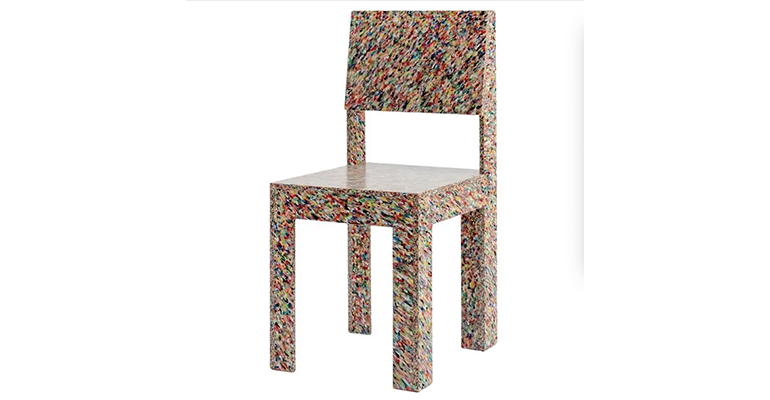 Thirty years ago, Jane Atfield presented a chair made of recycled plastic bottles as part of her graduation showcase at the Royal College of Art in London. Today, she is hailed as a pioneer of the green movement of contemporary British design.

Thirty years ago, when British designer Jane Atfield unveiled the now-iconic RCP2 chair, more widely known as the “Atfield Chair,” the notion of circularity was not yet in the popular lexicon. The chair made of recycled plastic was a creative commentary on the society of consumption, but it started a thread that would lead to a larger conversation on the repurposing of single-use plastics in the decades that followed.

Made of multi-colored panels of recycled plastic board, itself composed of chips of used plastic bottles, the chair was making a “connection between waste and consumerism,” Atfield recently told Fast Company at the occasion of an exhibition at New York City’s Emma Scully Gallery celebrating the 30-year anniversary of the “seminal design.” Atfield partnered with the gallery to create a limited reissue of the chair as part of a celebration of her work, which ran from March 23 to April 30, 2022. (If you’re interested in owning a piece of this history, online marketplace 1stDibs has exclusive re-editions of the RCP2 Chair from the Emma Scully Gallery available for sale on its website.)

Atfield first had the idea for the chair while attending the Royal College of Art (RCA) in London. Her muse, so to speak, was a sample of a high-density polyethylene board produced by Missouri-based recyclers Yemm & Hart that a classmate brought back from a trade show in New York. She imported the vibrantly colored boards and fashioned them into a deliberately boxy design, an homage to the crate chair created by Gerrit Rietveld in the 1930s. The Atfield Chair became part of her RCA graduation showcase in 1992, and brought her fame as a pioneer in the “green movement of contemporary British design,” writes a curator of the Victoria & Albert (V&A) Museum in London. One version of the RCP2 chair is part of the permanent V&A collection.

The Spartan design puts the focus squarely on the material used — or re-used, to be more precise — in its fabrication, “recycled plastic bottles that once contained shampoo, washing-up liquid, or suntan lotion,” as the V&A notes on its website. The different colors of the bottles and even fragments of printing can give the impression that the chair has been painted, adds the V&A. Indeed, a close-up of the chair, as seen below, recalls some of the more colorful work of Jackson Pollock and other abstract expressionists.

Following her initial success, Atfield founded Made of Waste, “an agency for recycled materials dedicated to taking Yemm & Hart’s idea of turning trash into new materials and adapting it for British waste streams,” writes Whitney Bauck in Fast Company. “At a time when recycling infrastructure in London was still being developed, Atfield dedicated herself to finding and repurposing everything from Marks & Spencer coat hangers to used plastic wrap from catering companies.”

Today, Atfield advocates for a reduction in plastics production, including through government intervention. In the meantime, “she sees recycling as a transitional solution and hopes the RCP2 can play a role in inspiring people to get creative with waste,” writes Bauck.