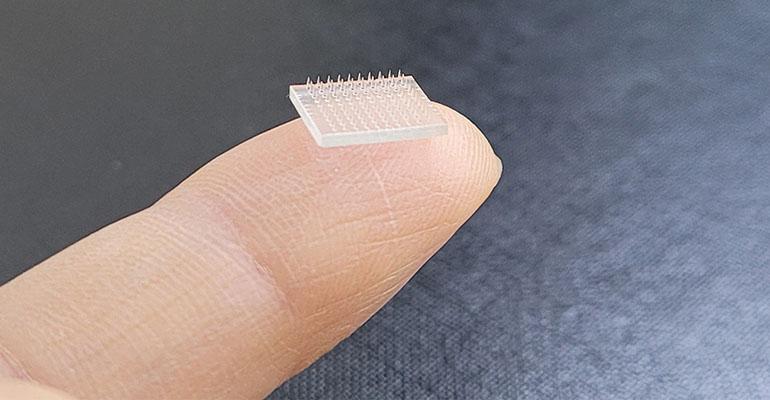 Researchers claim that the 3D-printed plastic patch with a micro-needle array is 10-times more effective in producing an immune response.

Some people are terrified of needles, to the extent that they will avoid getting vaccinated. It should be noted that this is a nonpartisan condition. Researchers have come up with an alternative: A 3D-printed plastic patch made up of an array of micro-needles so small that the fear factor is held in check as the vaccine is delivered directly into the skin. Moreover, the researchers claim that the immune response is 10 times greater than with a vaccine delivered by a needle jab.

While micro-needle patches have been studied for decades, scientists at Stanford University and the University of North Carolina at Chapel Hill said that their breakthrough came in 3D printing micro-needles on a polymer patch that are just long enough to reach the skin to deliver vaccine. 3D printing allows customization of the micro-needles for the development of various patches for flu, measles, hepatitis, or COVID-19 vaccines. The vaccine patch is applied directly to the skin, which is full of immune cells that vaccines target.

“In developing this technology, we hope to set the foundation for even more rapid global development of vaccines, at lower doses, in a pain- and anxiety-free manner,” said lead study author Joseph M. DeSimone, professor of translational medicine and chemical engineering at Stanford University and professor emeritus at UNC-Chapel Hill.

Study results reportedly show the vaccine patch generated a significant T-cell and antigen-specific antibody response that was 50 times greater than an injection delivered under the skin. A paper has been published in the Proceedings of the National Academy of Sciences.

The heightened immune response could lead to dose sparing, noted a press release published on the UNC-Chapel Hill website. A micro-needle vaccine patch requires a smaller dose to generate a similar immune response as a vaccine delivered with a needle.

It also eliminates some logistical issues affecting conventional vaccine-delivery methods. Patches incorporating vaccine-coated micro-needles that dissolve into the skin could be shipped anywhere in the world without special handling or cold-storage requirements. Also, they can be self-administered. The ease of using a vaccine patch may lead to higher vaccination rates, according to the researchers.

It’s generally a challenge to adapt micro-needles to different vaccine types, said lead study author Shaomin Tian, a researcher in the Department of Microbiology and Immunology in the UNC School of Medicine. “These issues, coupled with manufacturing challenges, have arguably held back the field of micro-needles for vaccine delivery,” she said.

Most micro-needle vaccines are fabricated with master templates to make molds. However, the molding of micro-needles is not very versatile, and drawbacks include reduced needle sharpness during replication.

“Our approach allows us to directly 3D print the micro-needles, which gives us lots of design latitude for making the best micro-needles from a performance and cost point-of-view,” Tian said.

The micro-needle patches were 3D printed at UNC-Chapel Hill using continuous liquid interface production (CLIP) 3D-printing technology. DeSimone used a prototype 3D printer that he invented and that is produced by Silicon Valley–company Carbon, which he co-founded.

The team of microbiologists and chemical engineers currently are formulating RNA vaccines, like the Pfizer and Moderna COVID-19 vaccines, into micro-needle patches for future testing.