HomeMedical3D Printing and Modeling Crucial to Face and Hands Transplant
Recent
End Markets
Springfield Plastics Announces Major Expansion
May 27, 2022
Resin Enables Cost-Effective Impact Modification with Lighter Elastomer Load
May 27, 2022
PPS-Polyamide Tubing Offers High-Temp Option for Cooling Lines
May 27, 2022
The End of the Extrusion Line Is Where Savings Begin
May 26, 2022
Single-Use Endoscope Technology Earns New Accolade
May 26, 2022
Bioplastics News Stream
May 26, 2022
Breaking News in Flexible Packaging
May 26, 2022
Rehau Group Pulls Out of Russia
May 26, 2022
Innovations
brought to you by

3D Printing and Modeling Crucial to Face and Hands Transplant 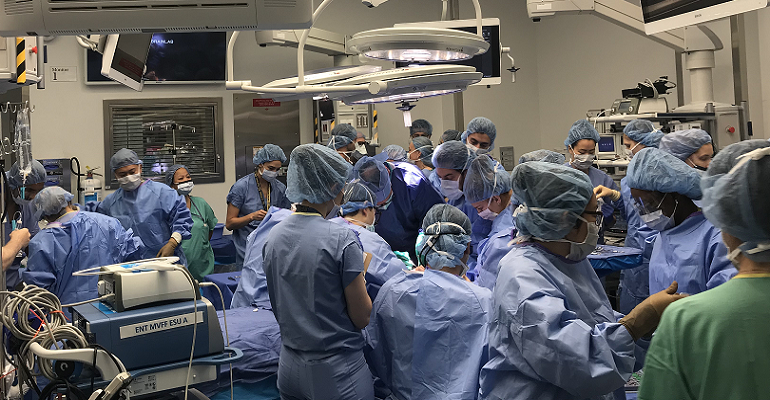 Almost six months after a rare face and hands transplant, 22-year-old New Jersey resident, Joe DiMeo, stepped out to show how the transplant now allows him to smile, blink, pinch, and squeeze. DiMeo had the operation last August, two years after being badly burned in a car crash that left him with severe injuries to his face and both arms. He suffered significant damage to his soft tissue, which severely limited his ability to lead a normal life.

Image-based planning and medical 3D printing have completely revolutionized personalized patient care by providing surgeons with detailed insights and an additional level of confidence before entering the operation room.

During a preparation period of 14 months, Materialise clinical engineers formed a cohesive team alongside NYU Langone surgeons, rehearsing the transplant operation in a lab environment to develop and fine-tune the surgical plan. Once a suitable donor was found, the team, led by Dr. Eduardo Rodriguez, professor of reconstructive plastic surgery the Helen Kimmel, chair of the Hansjörg Wyss Department of Plastic Surgery at NYU Langone, had only 24 hours to begin the procedure that would improve the DiMeo’s function, appearance, and quality of life.

Materialise offered the team 3D planning and printing tools to enable the speed and accuracy required for this complex medical procedure. 3D printed personalized tools such as those used in the double hand and face transplant, are also increasingly common for use in routine surgery, providing surgeons with an additional level of confidence which results in improved patient outcomes. 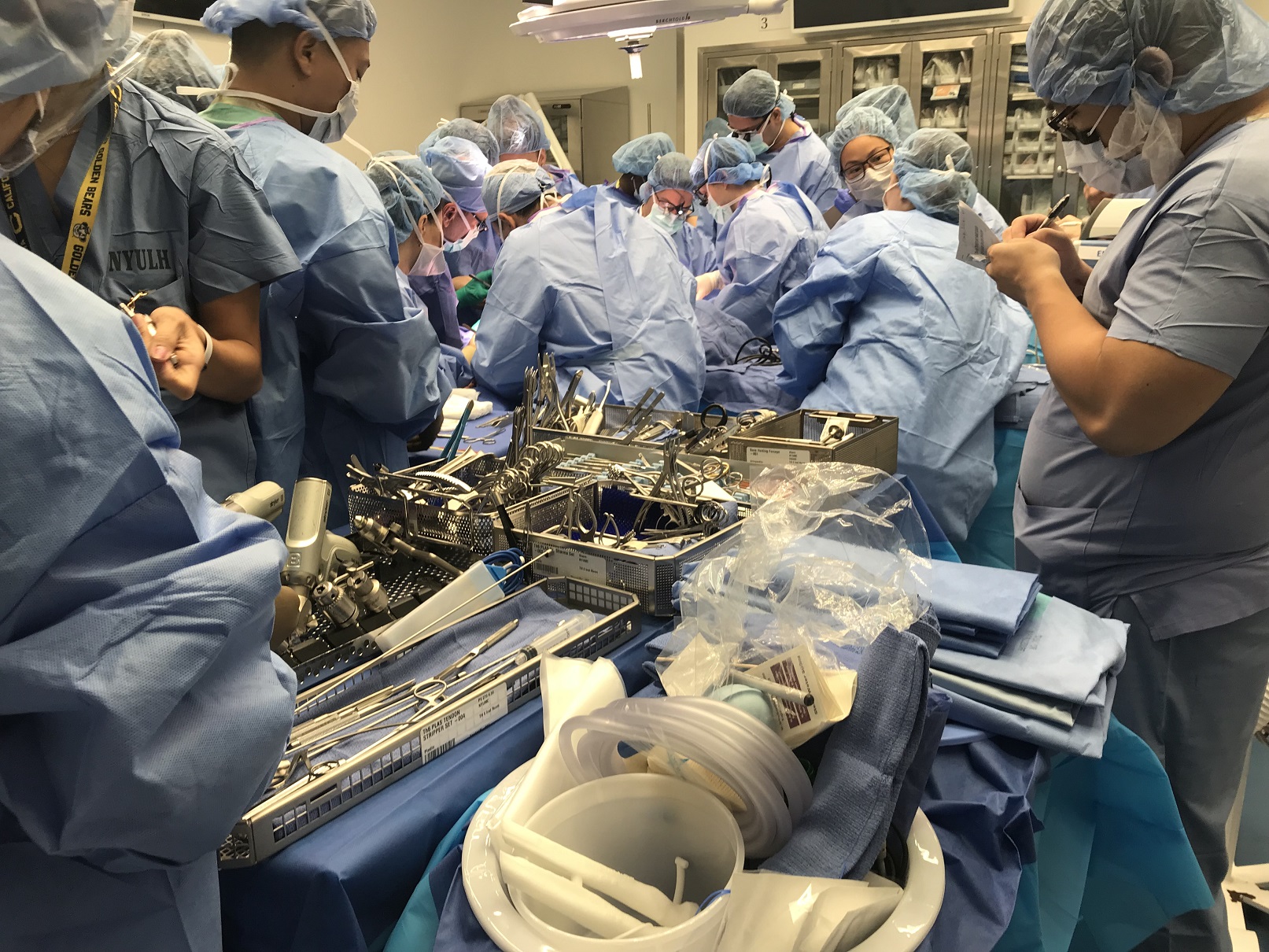 During a preparation period of 14 months, Materialise clinical engineers formed a cohesive team alongside NYU Langone surgeons, rehearsing the operation in a lab environment to develop and fine-tune the surgical plan.

Creating the Tools for the Operation

During the procedure, Rodriguez and his surgical team of sixteen used Materialise’s 3D printed cutting and drilling guides. “We used several medical tools for this procedure. The cutting guides used for this operation allowed surgeons to cut the donor and recipient bones very precisely. We also used drilling guides that allow the donor bones to be attached to the recipient's bones more easily and with great accuracy,” Kristof Sehmke, global communication manager at Materialise Medical, told Design News. “These cutting and drilling guides are prepared virtually based on CT scans and the surgeon’s indications, as part of the pre-surgical planning.” 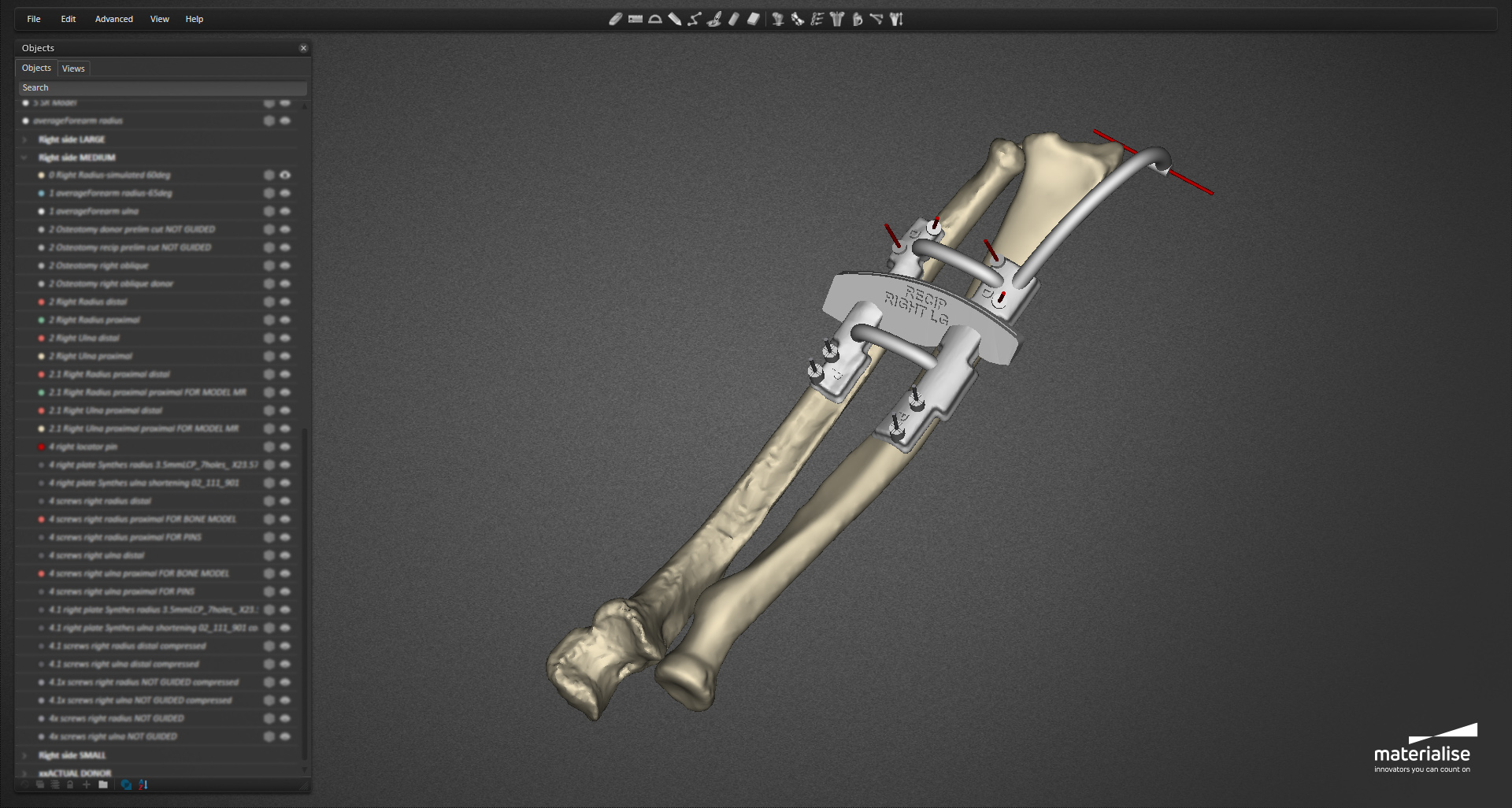 Materialise engineers coordinated the development of a surgical plan and created an on-screen 3D model based on CT-scans.

In creating the tools for the operation, Materialise worked with the medical team to match the tools with the patient’s physiology. “The patient-specific guides follow the personal anatomy of the donor and recipient. The guides are then 3D printed and shipped to the hospital,” said Sehmke. “While these guides are entirely patient-specific, this type of personalized surgical tools is not new and also increasingly used for more routine surgery, providing increased speed and accuracy.”

In the months leading up to the surgery Materialise engineers coordinated the development of a surgical plan and created an on-screen 3D model based on CT-scans. This allowed the surgeons and clinical engineers to virtually plan the procedure and visualize different scenarios in three dimensions, creating an in-depth understanding of the anatomical bone structure and determining the optimal surgical flow. “The pre-surgical planning consisted of a virtual 3D on-screen representation and simulation of the planned surgery, providing surgeons with detailed insights and an additional level of confidence before entering the operation room,” said Sehmke. “The surgeons created 3D printed surgical cutting and drilling guides. The guides provide increased speed and accuracy. They are typically used for hip, knee, and shoulder surgery but also for cranio maxillofacial surgery.” 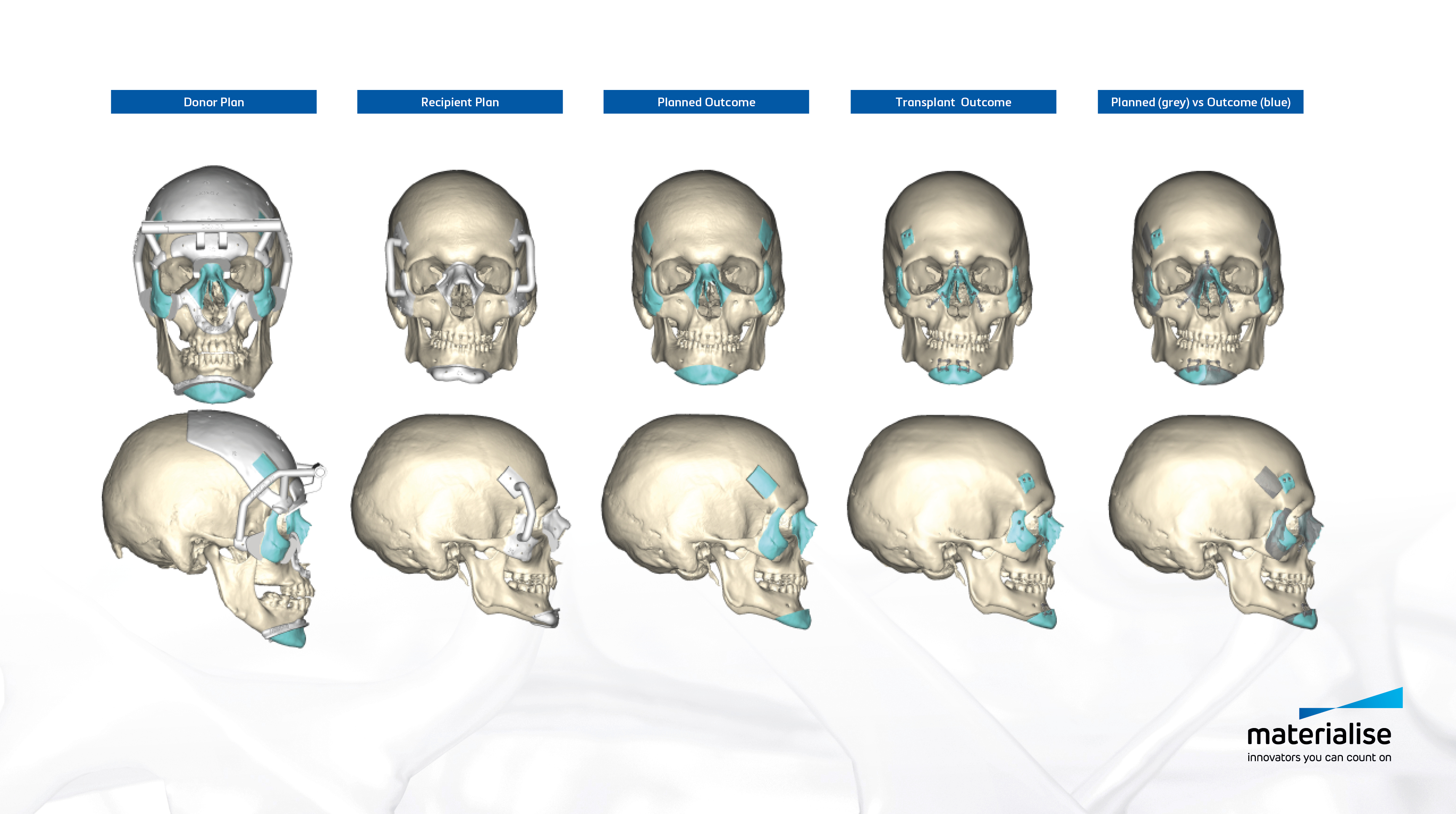 Pre-surgical planning made it possible for surgeons to virtually select and position various medical implants to predict the optimal anatomical fit.

Bringing FDA Approval to the Process

As for the choice of Materialise as a software source for the operation, there were several tools the company was able to provide to the surgical team. “The medical industry is highly regulated and has very strict safety requirements. Materialise has pioneered many leading medical applications of 3D printing and personalized solutions have been Materialise Medical’s core business since its foundation in 1990,” said Sehmke. “We bring nearly three decades of experience in developing medical solutions that help researchers, engineers and clinicians achieve the desired patient outcomes,” 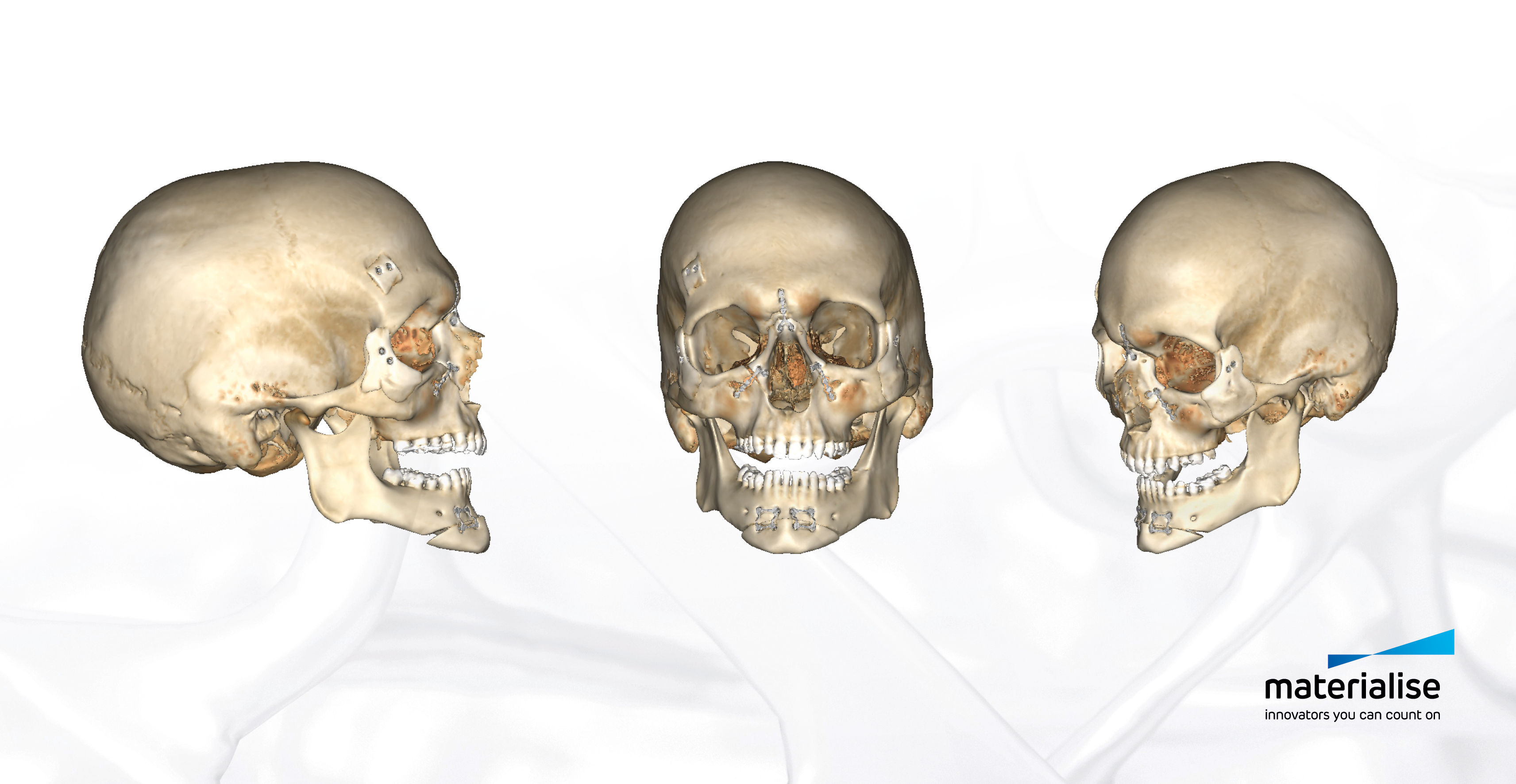 A fully guided system for bone fragment repositioning and fixation was unique to the patient’s anatomy and helped position the medical tools with great precision, reducing the overall surgery time.

As well as providing cutting-edge technology to the surgical team, Materialise also brought the credibility of an FDA blessing. “The company  has a legacy of adhering to the highest possible safety standards and has obtained CE Marking Certification for most of its personalized orthopedic and cranio maxillofacial solutions. This includes 3D-printed anatomical models and patient-matched surgical guides and implants,” said Sehmke. “Materialise was also the first company in the world to receive FDA clearance for software intended for 3D printing anatomical models for diagnostic use. This kind of certification helps raise the industry bar to ensure patient safety and transparency on personalized devices' production.”