The best locations for advanced manufacturing you've never heard of

Is Gardnerville, NV, population 6,000, the future of advanced manufacturing? Site selection consultancy Boyd Co., Inc. (Princeton, NJ) thinks so. It has named the town in the Reno/Sparks/Lake Tahoe metro area the "best in the west," one of three small-market cities in the United States for engineering plastics, medtech, composites and other advanced manufacturing companies seeking to expand or relocate operations. The other two communities are Pooler, GA, and Lafayette, IN.

U.S. manufacturing is making a strong comeback, thanks to inexpensive and abundant energy supplies along with productive workers here and rising wages abroad, says John Boyd Jr., Principal. Reshoring is not a mirage, he stresses. It's happening.

"We have seen 100,000 manufacturing jobs come back to the United States in the last three years," Boyd told PlasticsToday. "There are a number of reasons—higher wages and rising utilities costs abroad, supply chain complexities, the hidden cost of goods being at sea for two weeks, and the unstable situation at some ports," he said. And there is another reason that jobs are coming back from China that is often not mentioned, he adds. "Trucking in China is notoriously expensive and corrupt," says Boyd, complicating matters when transporting goods from the factory to the port.

It's so much easier and increasingly competitive to do business in the United States, but as they say in real estate, location is everything. Boyd's consultancy has done the numbers on regions throughout the United States, and the three aforementioned small-market cities offer the best opportunities for companies in the advanced manufacturing sector.

The analysis focuses on the key cost elements that weigh heavily in the corporate site-selection process: Labor, real estate, power and taxes, among them. Overall costs were scaled to a hypothetical 225,000-sq-ft plant employing 325 workers. Based on those inputs, the total operating costs for Gardnerville totaled approximately $23 million; Lafayette came in at just over $22 million; and Pooler was just under $22.2 million. (The table at the end of the article shows how they rank among 40 other up-and-coming small-market U.S. cities in terms of operating costs.) Compare that with Mountain View, CA, at almost $30 million, and you're saving a chunk of change. But the cost of doing business is just part of the story, explained Boyd.

"All three of these locations share some common denominators," said Boyd. "They are located in right-to-work states, have an abundance of renewable energy, easy access to transport and shipping, and strong job training programs," said Boyd. He points to a strong, employer-focused training program through a local community college in Lafayette and the science, technology, engineering and math (STEM) emphasis at the Douglas Campus of Western Nevada College near Gardnerville as models for the nation.

Gardnerville has something that the other two towns don't have, however: The tacit imprimatur of a certain Elon Musk, who recently announced that Tesla Motors would build its $5 billion "gigafactory" in the Reno area. The lithium-ion-battery production plant, at an estimated 24 million square feet, could be the largest building on the planet. Ever since the news broke, "our phones have been ringing off the hook with customers asking us about Nevada," said Boyd. "As Musk said, he didn't just cash a huge check in making that deal. He got commitments from the public powers to make massive investments in infrastructure and job training programs." That will lead to a 21st century gold rush to the region: Boyd projects a population explosion of 200,000 people over the next 20 years in northern Nevada.

"And there is another factor to consider, which was not even on our radar 10 years ago—lifestyle amenities," added Boyd. While all three cities rank well in that regard, Gardnerville might have an edge, since it's a half-hour drive from stunningly beautiful Lake Tahoe, with its winter and summer recreational activities and gambling and entertainment on the Nevada side. Quality-of-life issues are especially important when you consider that top-notch technical and management talent is being priced out of the nearby San Francisco Bay area.

Gardnerville's rise is emblematic of a larger shift in site selection strategies since Boyd hung its shingle in 1975, providing consulting services for the likes of Pratt & Whitney, PepsiCo, Visa International and Hewlett-Packard. "Five years ago we were looking at states like Georgia, North and South Carolina, Alabama and Tennessee," says Boyd. While Georgia still has a horse in this race with Pooler, "the center of gravity has largely moved to the midwest and Nevada," adds Boyd.

As manufacturing jobs wash back on U.S. shores, companies will seek out smaller, less costly and more manageable cities, according to Boyd. And their quest, as has often been in the case in the more-recent American narrative, may begin in the west.

The complete report is available on a complimentary basis by emailing the Boyd Co. at [email protected]. 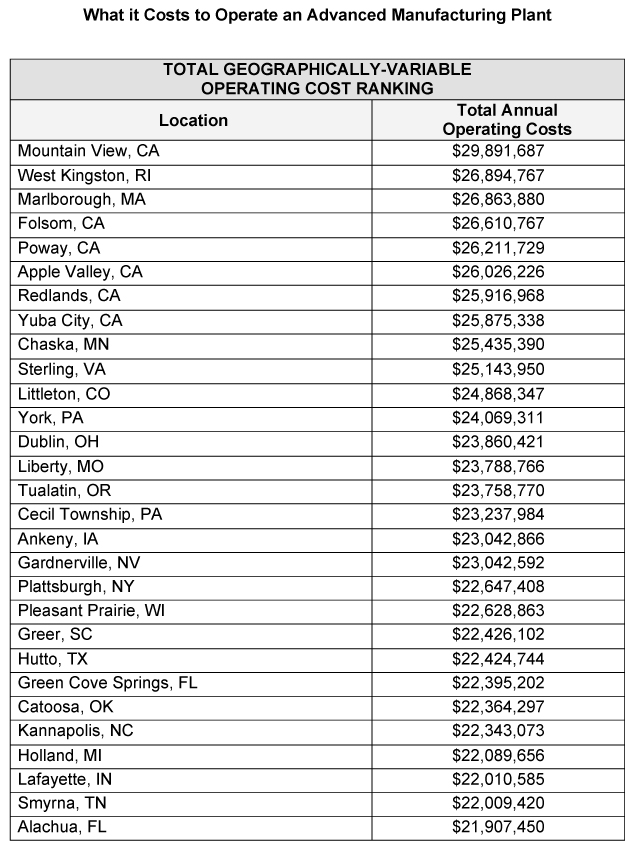