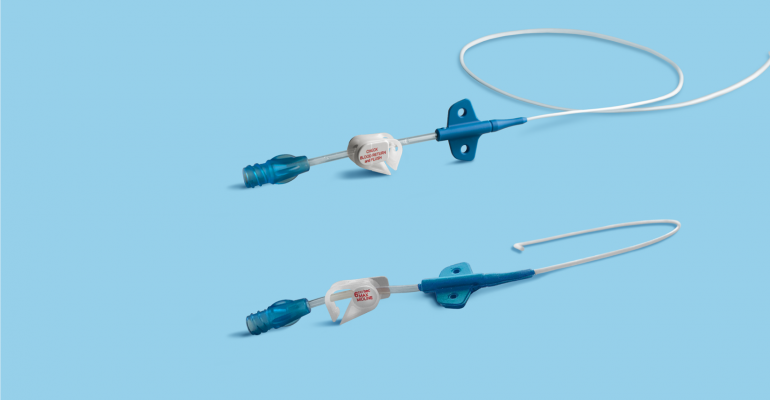 Access Vascular Inc.’s biomaterial-based catheters aim to address complication rates that have long plagued the space. Vascular access complications delay treatment, incur additional risk for patients, increase costs, and lead to poorer patient satisfaction. Yet, the space has seen little innovation, according to the company, which shared that data from a pair of studies suggest its biomaterial catheter can reduce complication rates.

“The ultimate goal is not just some incremental improvement in outcomes but really transforming the efficacy of vascular access procedures unlike anything that is in the space,” said James Biggins, chief executive officer of Access Vascular. "It’s time to provide a better option to patients and clinicians to address these issues.”

Interim analysis data from the company’s two studies suggest that its PICC and midline catheters have led to significant improvements in rates of occlusion, need for replacement catheters, deep vein thrombosis, and phlebitis compared to these issues with standard catheters.

Currently, vascular access is achieved through use of polyurethane catheters and result in about a 30% complication rate. Infection, phlebitis, and thrombosis, the top three complications, can significantly impact patient care, at a minimum stopping the current treatment regimen and potentially leading to life-threatening infection or pulmonary embolism.

The company’s duo of new catheters can reduce thrombosis by as much as 97%, according to the company, partly by eliminating some of the body’s reaction to catheter insertion. Access Vascular’s newly marketed HydroPICC and HydroMID catheters are hydrophilic, made from a hydrogel-based biomaterial that is more akin to tissues than the ubiquitous polyurethane catheter. Hydrogels have a long history of use in orthopedics and other specialties, yet AVI’s material has altered some of the characteristics—its catheter biomaterial is not bioresorbable or brittle.

The company’s biomaterial catheter was designed specifically to mimic the well-established use of catheters by physicians while also reducing pain points in maintenance and care. “We took a fundamentally different approach,” said Biggins. “Rather than mask these materials, we said, ‘why can’t we change the material and therefore change the reaction of the body to the presence of ultimately a foreign body?’ It’s the only alternative catheter material that’s in the market or in development that will essentially significantly reduce and in some cases eliminate these issues from occurring in the first place.”

Given the widely established use of catheters for vascular access, it was important that the biomaterial-based catheters perform in the same manner as the current polyurethane catheters, explained Biggins. “We wanted to make sure we did not disrupt whatsoever the clinical workflow that has been developed. We designed and developed the material to address the complications, and that boiled down to material. [Physicians] don’t have to change their practice to have better outcomes.”

After 18 months of shadowing physicians, the company was compelled to address complication rates from a new angle. “It was important that we are solving an unmet need, and through that process, it was undeniable the amount of issue and the frustration from clinicians with their vascular access devices,” said Biggins. “It was witnessing firsthand how patients were suffering from issues related to vascular access devices and the lack of truly innovative products.”

The new devices were developed through the 510(k) process as predicate devices but have additional qualities that may make the biomaterial catheters easier to use. Due to its hydrophilic characteristics, the catheters are “lubricous” and may be more easily inserted into tissue with little disruptions; research findings on improved performance are expected to be released. Access Vascular continues development of additional devices in the space.