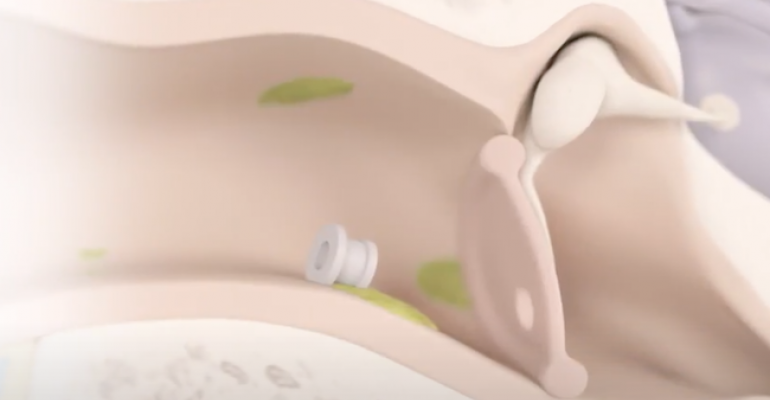 The ear tubes are made from a proprietary aqueous silk technology that is slowly reabsorbed during treatment. The technology has the potential to revolutionize the treatment of ear infections, the most common pediatric surgical procedure in the United States.

Medical device company PAVmed Inc. has announced that it will partner with Canon Virginia Inc. to manufacture its resorbable DisappEAR molded pediatric ear tubes. A letter of intent articulates the agreement between the companies to use Canon Virginia’s commercial-grade, scalable aqueous silk fibroin molding process to produce the ear tubes. Initially, PAVmed was machining blocks of silk but has decided to transition to injection molding because, as the company said in a press release, it is “a much less costly and efficient commercial manufacturing process, especially at scale.”

PAVmed chose Canon Virginia as its partner for this project because of its wealth of relevant manufacturing expertise and capabilities. “Canon’s extensive experience and expertise in innovative and efficient production methods and its vast state-of-the-art facilities in Newport News, Virginia, make it the ideal partner to develop this groundbreaking technology for the one million children who currently undergo ear tube placement each year,” said said Lishan Aklog, MD, PAVmed Chairman and CEO.

The letter of intent outlines two sequential agreements between the companies covering a five-phase project culminating in the commercialization of PAVmed’s DisappEAR molded pediatric ear tubes. The device has not yet received clearance from FDA or other regulatory agencies.

PAVmed licensed the technology underlying its DisappEAR resorbable ear tube from Tufts University on behalf of itself and other leading academic institutions, including Harvard Medical School teaching hospitals Massachusetts Eye and Ear Infirmary and Massachusetts General Hospital; the Massachusetts Institute of Technology; and Eidgenössisches Technishe Hochschule Zürich. The ear tubes are manufactured from a proprietary aqueous silk technology that is slowly reabsorbed over the intended course of treatment.

The technology has the potential to revolutionize the care of children with complex or recurrent ear infections (otitis media) by avoiding a second procedure and eliminating the need for a seven to 10-day post-operative ear-drop regimen, according to PAVmed. The company also expects reduced complications, including fewer ear tubes remaining in the ear canals for years after becoming dislodged, a situation that may lead to pain, bleeding, or an obstructed view of the ear drum required to identify recurrent middle-ear infection.

Each year, up to one million children with otitis media or middle ear fluid collections (effusions) undergo placement of metal, plastic, or latex bilateral ear tubes to drain the middle ear. This is the most common pediatric surgical procedure in the United States. Up to 50% of patients require repeat surgery under general anesthesia to remove the tubes once they are no longer needed or if they become dislodged and do not fall out of the ear canal on their own.

Extensive animal testing of the DisappEAR ear tubes at Harvard Medical School has shown that they retain their implant position with good healing of the ear drum. The tests also revealed unexpected surfactant properties, said PAVmed. They appear to provide several unique benefits over traditional plastic tubes, including enhanced drainage of fluid from the middle ear, potential intrinsic antimicrobial properties, and a surprising absence of otorrhea, a difficult to manage condition where pus and fluid drains out of the middle ear and into the ear canal. This condition typically occurs among at least 25 to 30% of recipients of traditional plastic tubes, despite administration of antibiotic ear drops, said the company.

Based on premium pricing and cost savings from replacing post-procedure antibiotic drops by using DisappEAR pediatric ear tubes, PAVmed estimates an annual market opportunity for this device of $200 to $300 million.

PAVmed describes itself as a highly differentiated, multi-product, commercial-stage medical device company employing a unique business model designed to advance innovative products to commercialization rapidly and with less capital than the typical medical device company. This proprietary model enables PAVmed to pursue an expanding pipeline strategy with a view to enhancing and accelerating value creation while seeking to further expand its pipeline through relationships with its network of clinician innovators at leading academic centers, said the company.

Canon Virginia Inc. was established in Newport News, VA, in 1985 as the North American manufacturing and service arm for Tokyo-based Canon’s office and consumer products. The vertically integrated facility handles everything from engineering, toolmaking, and injection molding to assembly, distribution, and aftermarket services for its parent company. About three years ago, Canon Virginia made its contract services available to third parties. Partnerships with medical device OEMs is a growing part of that business. PlasticsToday spoke with Ron Kurz, Senior Director of Canon Virginia's Medical Business Division about the company's vision at the Medical Design & Manufacturing (MD&M) West trade show and conference earlier this year. You can read the interview here.