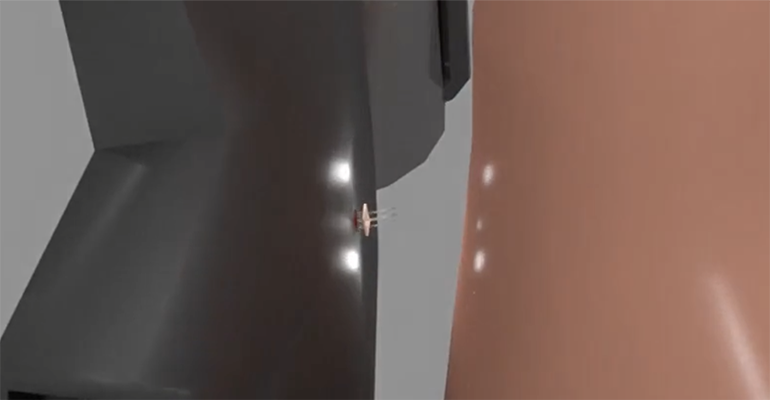 Integrated flexible sensors perceive the movement of fine hairs on the electronic skin.
The electronic skin created by researchers in Germany is the first to anticipate and perceive touch from all directions. The breakthrough has tremendous potential in robotics and regenerative medicine.

Researchers in Germany have developed an elastomer-based electronic skin (e-skin) with integrated artificial hair that perceives — and, indeed, anticipates — touch from different directions. The breakthrough allows the fabrication of e-skin that more closely mimics the sensitivity of human skin. Applications range from skin replacement and wearables to robotics.

Scientists from the Chemnitz University of Technology and Leibniz IFW Dresden explored a new avenue to develop extremely sensitive and direction-dependent 3D magnetic field sensors that can be integrated into the active matrix of an e-skin system. Led by Prof. Dr. Oliver G. Schmidt, head of the Professorship of Material Systems for Nanoelectronics as well as Scientific Director of the Research Center for Materials, Architectures, and Integration of Nanomembranes (MAIN) at Chemnitz University of Technology, the team used a completely new approach for miniaturization and integration of 3D device arrays. The research is described in a paper in the current issue of Nature Communications.

The core technology in the e-skin is on anisotropic magnetoresistance (AMR) sensor, which precisely determines changes in magnetic fields. AMR sensors currently are used as speed sensors in cars or to determine the position and angle of moving components in machinery.

Using an origami-inspired technique, the researchers folded the AMR sensor components into three-dimensional architectures that can resolve the magnetic vector field in three dimensions. Micro-origami allows a large number of microelectronic components to fit into small spaces in geometrical arrangements that are not possible using conventional micro-fabrication technologies.

The magnetic sensor array is placed on a single active matrix, where each individual sensor can be conveniently addressed and read out by microelectronic circuitry. "The combination of active-matrix magnetic sensors with self-assembling micro-origami architectures is a completely new approach to the [miniaturization and integration of] high-resolution 3D sensing systems," said team member Dr. Daniil Karnaushenko.

The sensors and magnetically rooted fine hairs are embedded in an elastomer that forms the artificial e-skin. A 5-μm-thick encapsulation layer of polydimethylsiloxane (PDMS) serves as a soft skin interface.

When the hair is touched and bends, the movement and exact position of the magnetic root can be detected by the underlying 3D magnetic sensors, according to a news release on the Chemnitz University website. The sensor matrix not only registers hair movement, but also determines the exact direction of the movement. As with real human skin, each hair on an e-skin becomes a full sensor unit that can perceive and detect changes in its vicinity, according to the researchers. The magneto-mechanical coupling between the 3D magnetic sensor and magnetic hair root in real-time provides a new type of touch-sensitive perception by an e-skin system.

One application that grabbed the researchers’ attention is robotics. As humans and collaborative robots, in particular, work in proximity to each other, this technology will enable the cobot to sense human interactions before an intended contact, or an unintended collision, takes place. The technology also can be applied to augmented and virtual reality. In their paper, the researchers demonstrate how it can enable touch-less interactions with virtual objects in an augmented reality system.

A pair of videos on the Chemnitz University of Technology site illustrate the micro-origami folding technique and show how the embedded sensors and artificial hair sense touch and movement.