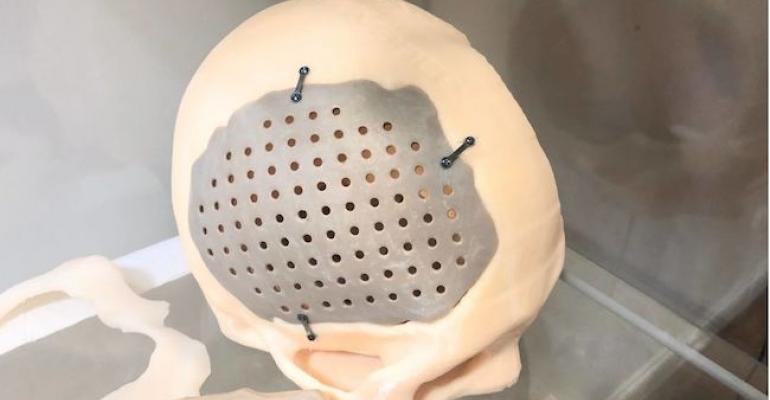 Materials supplier Evonik (Essen, Germany) announced this week that Meditool (Shanghai), a developer of 3D-printing systems for medical implants, is the beneficiary of its first direct investment in China through its venture capital arm.

The U.S.-China trade dispute and tit-for-tat tariffs may be disrupting the global economy, but, of course, the world of business marches on. Materials supplier Evonik (Essen, Germany), through its venture capital arm, announced this week that it is seeking a different kind of “disruption” by investing in a 3D-printing startup in China that makes implants for neurological and spinal surgery. The technology enables faster recovery and fewer post-operation checks for patients and less surgical risk for doctors, according to Evonik, which is the lead investor in a high single-digit million-euro round of fundraising for Shanghai-based Meditool.

This is Evonik Venture Capital’s first direct investment in China, and its first direct investment after initiating the second venture capital fund this year, said Bernhard Mohr, head of Evonik Venture Capital. “Meditool is a good example of how venture capital is helping Evonik secure access to disruptive technologies,” he said.

Meditool has developed its own hardware and software systems. The software can read and process images directly from magnetic resonance imaging or computed tomography scan devices. A readily printable 3D model is generated by the software and sent to the printer. The implants are 3D printed with polyether ether ketone (PEEK) under the brand name VestaKeep supplied by Evonik.

PEEK has a long history of use in medical implants, particularly in orthopedic applications, where its strength, biocompatibility and radio transparency make it an attractive alternative to titanium. While 3D-printed PEEK implants are relative newcomers on the scene—indeed, Evonik announced late last year that it had developed an implant-grade PEEK filament for 3D printing based on its Vestakeep i4 G material—the technology offers some truly revolutionary advances.

Most importantly, 3D printing allows customization. For example, a plate can be made to fit precisely to the patient’s skull. This reduces the likelihood of revision surgery to adjust the size, shape or positioning of the implant. Also, and this is not limited to 3D printing, PEEK is less thermally conductive than metal, meaning that patients exposed to hot and cold temperatures won’t be in danger of the implant heating up or cooling down excessively.

“Meditool is one of the pioneers in developing 3D-printed PEEK medical implants,” said Ken Jin, co-founder and Chief Technology Officer of Meditool in a prepared statement. “Evonik has been our trusted partner in materials supply. The venture investment will be an extra boost to our endeavor to bring innovative solutions to patients and surgeons in China and the rest of the world.”

As the second-largest economy in the world with a surging middle class, China is a key growth market for Evonik, noted Claas Klasen, President Evonik Asia North region. “It not only fosters leap-frog technology, it has the population and growing middle class to drive fast-paced demand,” added Klasen. The Chinese market also ranks as the world’s second largest for medical implants, with expected annual growth rates of 10 to 15%, according to Evonik.

Evonik Venture Capital plays a strategic role in Evonik’s goal to become a best-in-class specialty chemicals company by helping secure access to disruptive technologies and innovative business models, as well as supporting digital transformation, said the company in a press release. To this end, Evonik launched its second venture capital fund with a volume of €150 million at the beginning of 2019, more than doubling the amount under management to €250 million.