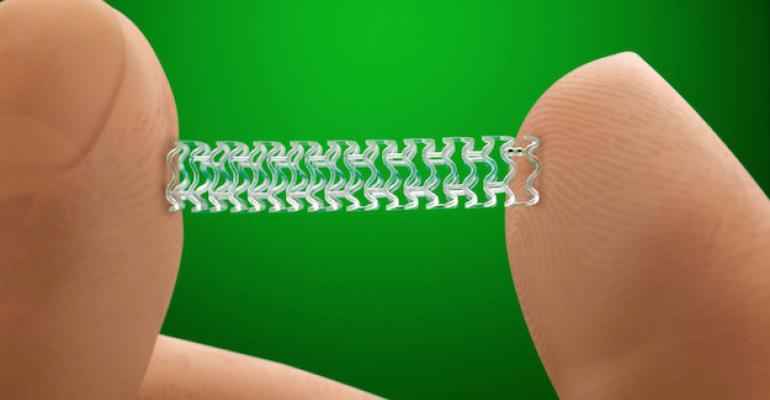 “FDA’s approval of the Absorb GT1 BVS offers a new treatment option for individuals who are candidates for angioplasty, but would prefer an absorbable device rather than a permanent metallic coronary stent,” said Bram Zuckerman, MD, Director of the Division of Cardiovascular Devices at FDA’s Center for Devices and Radiological Health.

Poly(L-lactide) is similar to materials used in other types of absorbable medical devices, such as sutures. The device’s absorption by the body gradually eliminates the presence of foreign material in the artery once the stent is no longer needed. After absorption, there are only four very small platinum markers embedded in the walls of the artery, which help cardiologists identify where the stent was originally placed.

The company initially hoped to receive FDA approval for the device as early as 2012. (The device received the CE mark in January 2011 and is currently available in more than 100 countries.) “The long and winding road since [2011] says a lot about how innovations happen, and about just how hard it can be,” writes  Amy Feldman in Forbes. Abbott, like other manufacturers of bioabsorbable polymer stents, was challenged with the “twin problems of strength and absorption.” Polymers aren’t as strong as metals, and when you try to make them strong they become brittle, notes Feldman. The company also had to engineer an optimal resorption rate. “If the stent dissolved too quickly, the artery might not remain open long enough, but if it went away too slowly it wouldn’t offer as much advantage over a traditional stent,” writes Feldman.

Coronary heart disease is responsible for about 370,000 deaths each year in the United States, according to the National Heart, Lung, and Blood Institute. Angioplasty is typically performed to widen the artery using a metal stent. However, scar tissue can form within the stent causing the artery to narrow again. Drug-eluting stents temporarily release a drug, typically for a few months after stent placement, to combat the formation of scar tissue.

By contrast, bioresorbable stents are designed to leave the body over a period of time and allow the artery to heal itself in lieu of relying on a permanent metal structure.