Gone Are the Days of Europe-First Medical Device Innovation 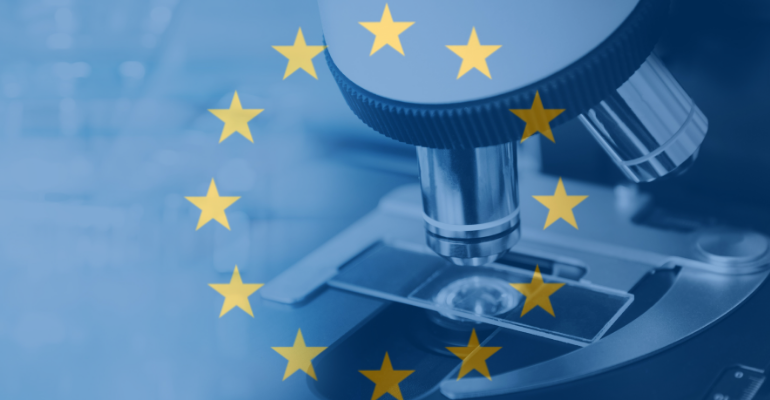 Pursuing regulatory approval in Europe first has lost its appeal, according to an explosive new industry survey.

For decades it was a widely accepted strategy to bring new medical devices to the European market first. Simply put, obtaining a CE mark was faster, cheaper, and more predictable than getting regulatory approval anywhere else.

That speed-to-market, however, was often seen as a tradeoff for patient safety. Instead of pumping money into rigorous clinical trials to demonstrate the product's safety and efficacy, medical devices could be sold in Europe as long as they performed "as intended" and were "likely to be safe."

Back in 2016, the BMJ (British Medical Journal) published a study comparing the rates of safety issues and reporting of trial outcomes for medical devices approved in the European Union and United States. Researchers from Harvard (Cambridge, MA) and King's College London examined 309 high-profile medical devices (cardiovascular, orthopedic, and neurological) that had FDA approval and a CE mark. Sixty-three percent were approved first in the European Union. The researchers found that the devices approved in Europe first were three times more likely to require safety alerts and recalls.

Then came the EU's Medical Devices Regulation (MDR), intended to increase oversight of medical devices being sold in the EU, and the game was officially changed. Even with a one-year delay due to COVID-19, medical device manufacturers continue to note challenges with the EU MDR such as a lack of clarity, high costs, and time-consuming processes. 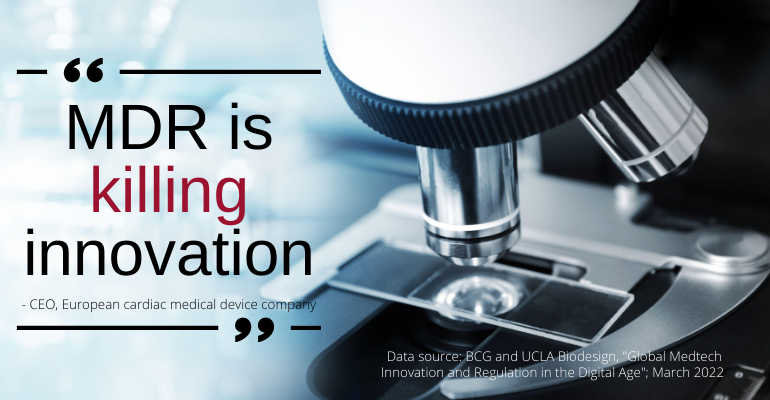 Now, almost a year after the EU MDR went into effect, an explosive new report published by the Boston Consulting Group (BCG) and UCLA Biodesign shows that the new regulation has slowed the pace of medical device innovation in the European Union.

Based on a survey of 104 company leaders who provided commentary and data on 105 new medical devices, technologies, and software of any risk class that have achieved 510(k) clearance or FDA approval, or have attained a FDA breakthrough device designation. Many of the products also sought EU CE mark, Japan PMDA (Pharmaceuticals and Medical Devices Agency), or China NMPA (National Medical Products Association) approval in the period from 2010 to 2021. Most (85%) of the technologies represented are new products in their respective portfolios rather than line extensions or updates, the authors note, and 60% of them incorporate digital technology. 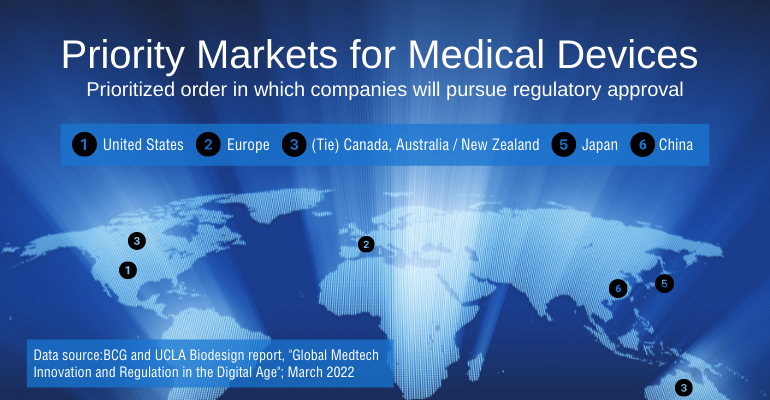 "Respondents overwhelmingly view new MDR rules as complex and unpredictable, making it less appealing to develop and launch novel products in Europe. Other factors, including Brexit and intense reimbursement pricing pressure, may also reduce the attractiveness of pursuing the CE mark," the authors wrote.

Because the report is based on a retrospective study, the results do not fully reflect the impact of the European MDR requirements, the authors not. So that being said, the average regulatory review time (pre-MDR) to CE mark for novel medical devices in the survey sample remained lower at 3.2 months versus 3.9 months for FDA 510(k) clearance.

The authors also pointed out that survey respondents have a less favorable view of the predictability of regulations for digital products than they do of the pathways for standard medical devices, regardless of geographical market. Sixty-two percent of respondents find the U.S. pathway for regulatory approval of standard medical devices predictable, versus 22% who view EU registration similarly, the authors reported. However, when asked about the predictability for digital products, these figures drop to 33% for the U.S. market and just 15% for the EU market.