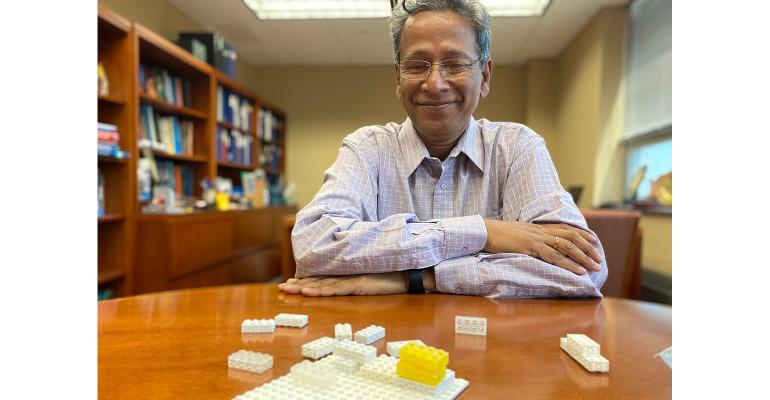 Researcher Sadhan Jana displays the Lego-like aerogel bricks his team has developed.
An aerogel brick structure could support the weight of an 8,000-pound elephant without breaking.

For generations, Lego bricks have inspired creativity among the young and not so young. But that’s child’s play compared with how the classic toy showed researchers at the University of Akron (UA) a design path to develop high-load-bearing aerogels.

Aerogels are created by combining a polymer with a solvent to form a gel, and then removing the liquid from the gel and replacing it with air, explained a news release on the university website. This makes them porous, very low in density, but a major drawback is that they are unable to support large loads. Aerogels are used as thermal insulation in space shuttles and under-the-ocean pipelines, in the material makeup of sound barriers, and in hospital filters for removing nanoparticles and viruses from the air.

“We were inspired by the simplicity of Legos and used them as templates to develop load-bearing aerogel structures that are stronger and more durable,” explained Jana, associate dean of research in UA’s College of Engineering and Polymer Science.

The Lego-like aerogel bricks are made from polymer struts with the interior space filled with aerogels. The aerogel inclusions provide the desired thermal insulation, while the modular nature and strength are the main benefits of the bricks, said the researchers.

Work is already in progress in Jana’s on-campus laboratory on an aerogel brick design that will be used as packing materials for cryogenic thermal insulation as well as air filters in hospitals. “Now, we can use our imagination to scale up, depending on how big the application is, just by putting the Lego bricks together,” said Jana.