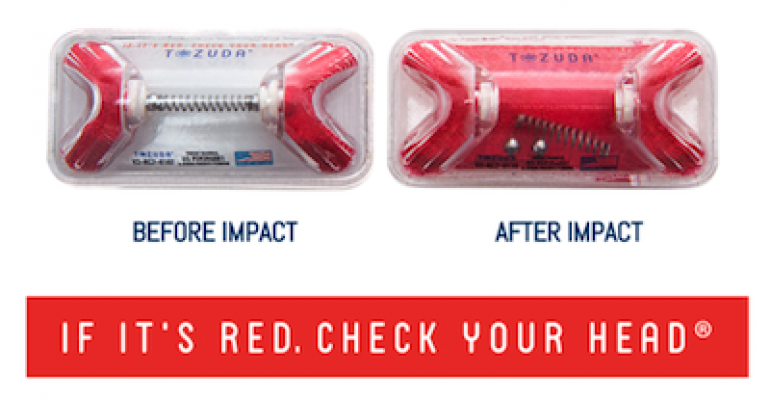 Philadelphia-based Tozuda, which has developed impact sensors that are attached to sports helmets to indicate a potential concussion, is the latest recipient of a Cool Idea award from digital manufacturing company Protolabs (Maple Plain, MN).

Unlike most current sensors, which are electronic and can be costly, Tozuda’s device is a mechanical design, using a compressed spring and ball bearings that keep dye tucked away in reservoirs. When an impact is of sufficient force, the spring and bearings dislodge and dye spills into a chamber, causing the device to turn red. The color change indicates the possibility that a concussion has occurred and the user should be evaluated for potential traumatic brain injury.

Tozuda’s sensor is described as a first-step indicator of damaging impact. While brain concussions are considered traumatic brain injuries, initially some people may not experience any symptoms at all. Tozuda cautions that individuals should seek medical attention to avoid secondary impacts that could worsen the injury.

“We worked closely with the Protolabs team and received instant quotes,” said Jessie Garcia, Tozuda CEO & founder. “Most important was their ability to work with liquid silicone to make Tozuda in the exact color and material we wanted.”

Protolabs used injection molding to manufacture three parts for Tozuda. The cover is made from transparent polycarbonate plastic that makes the detection system clearly visible. The base, where the device attaches to a helmet, is rugged ABS plastic. Between the two are critical internal components made from flexible liquid silicone rubber. These hold the spring and ball bearings in place, ensuring that the dye doesn’t leak unless jarred with a force that is sufficient to potentially cause a concussion. Tozuda’s catchphrase, “If it’s RED, check your head,” is a nod to the simple system built into the device to detect linear and rotational force. It also reminds users that only a medical professional can diagnose a concussion.

Tozuda produced initial prototypes in house, but turned to Protolabs for help when it realized that it could not produce the product in large enough quantities to meet expected demand.

“Knowing that we’ve helped a company whose invention can help identify the kind of dangerous impacts that could cause long-term brain injuries is a great example of why the Cool Idea award program exists,” said Brian Peters, Chief Marketing Officer at Protolabs. “We look to grant the award to inventors and entrepreneurs who not only want to build a profitable business model, but also affect the lives of others in a meaningful way. Our on-demand manufacturing service is ideal for Tozuda’s merging of technical and design simplicity in a small footprint,” said Peters.

Almost four million people will suffer from sports- and recreation- related concussions in the United States this year alone, according to Protolabs. In boys’ high school sports, for example, the vast majority of these happen during football games and practices. For girls, it’s soccer. Workers in industries that require protective headgear, such as construction, can benefit from Tozuda, too. The name, tozuda means “hard-headed” in Spanish.

“It was important to us that Tozuda be affordable,” said Garcia. “Young athletes and professionals in dangerous work situations deserve to know if their head injuries require a physician’s attention.”

The latest iteration of Tozuda will be available later this year. The company is accepting orders for the device through its online store. Pricing varies based on order quantity.