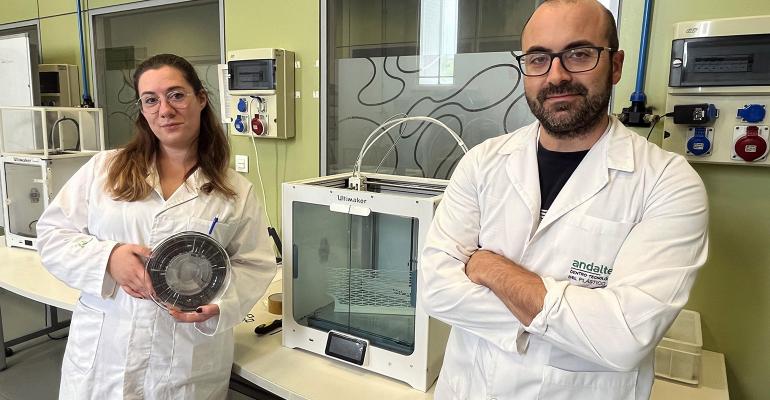 Antonio Peñas (right) heads the PoliM3D project.
Developed at Spain’s Andaltec Technological Centre for Plastics, the polymers have the potential to advance tissue regeneration and the manufacture of patient-specific implants.

Newly developed polymers with shape-memory properties formulated for 3D printing have the potential to advance tissue regeneration and the manufacture of patient-specific implants and prosthetic devices. The development announced by Spain’s Andaltec Technological Centre for Plastics stems from the PoliM3D R&D project, which began in 2019 with the aim of developing polymeric materials that can be processed by means of fused deposition modeling (FDM).

The shape-memory polymers are capable of integration in organisms with defined geometries and can adapt to their environment via thermal stimulation, according to the researchers. In collaboration with Manuel Melguizo’s Research Group at the University of Jaén in Spain, the materials have been functionalized with chemically modified graphene derivatives that improve the properties of the plastic matrix as well as adherence and cell growth.

Researchers at Andaltec have identified the polymer’s optimal formulation and performed mechanical and physical-chemical tests in the center’s labs. Subsequently, the material was biologically validated by a research group led by Professor Amelia Aránega at the University of Jaén and tested on myoblast cell lines.

“Testing has proved that the polymer is biocompatible with this type of cell,” said Antonio Peñas, who heads the PoliM3D project with researcher María Dolores Ramírez. “It has also confirmed that cell growth and adherence occur.” Tests reportedly showed that the presence of graphene additives prompted the cells to contract and expand without external stimuli, confirming that the polymer could have applications in 3D-printing-based tissue regeneration. “All in all, we are conducting a new testing campaign to better understand the material behavior and its possible healthcare uses,” added Peñas.

In parallel research, Andaltec technicians have developed 3D-printing filaments and optimized the additive manufacturing process such that prostheses and implants can be manufactured rapidly and safely. Shape-memory polymers processed via additive manufacturing could enable more affordable and efficient medical treatments, especially if the manufacturing is done at a hospital by specialized staff, according to Peñas.

In addition to creating the new materials and devices, Andaltec has the capability to train technicians responsible for manufacturing devices in hospital settings. It has broad expertise in additive manufacturing, offering prototyping, material development, and short series and special part production services.

The PoliM3D R&D initiative is funded by the Department for Economy, Business, and University of the Andalusian government.