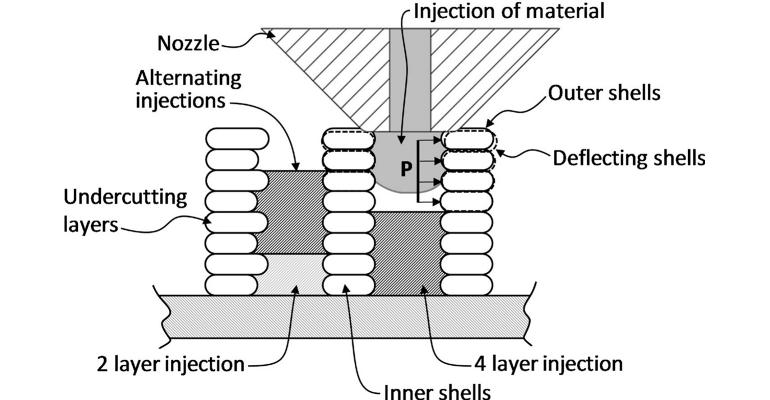 The technique developed by a UMass Lowell researcher incorporates elements of injection molding to increase the production rate of 3D printing while improving part strength, stiffness, and strain-to-failure properties.

A new 3D printing technique developed by a University of Massachusetts (UMass) Lowell researcher incorporates elements of injection molding to increase the production rate of 3D printing while enhancing the strength and properties of the resulting products. More durable prosthetic devices and stronger parts for airplanes and automobiles are among the potential applications.

While the global market for 3D plastics printers is estimated at $4 billion and growing, challenges remain in ensuring the printers create objects that are produced quickly, retain their strength, and accurately reflect the shape desired, according to UMass Lowell’s David Kazmer, a plastics engineering professor who led the research project. Called injection printing, the technology is featured in the academic journal Additive Manufacturing.

Injection printing combines material extrusion of the outer surfaces of a part at fine resolution with injection molding of larger interior cavities at high flow rates, write Kazmer and Austin Colon in Additive Manufacturing. Colon is a PhD candidate in plastics engineering who helped validate the technology. “Injection printing thus aims to utilize the full melting capacity of material extrusion printers to mitigate the curse of dimensionality that plagues additive manufacturing,” they added.

One of the seven types of additive manufacturing processes, material extrusion involves a continuous filament of thermoplastic or composite material being fed through a nozzle, where it is heated and deposited layer by layer on a build platform.

“We use the 3D printer as an injection unit to fill cavities [produced] by the 3D-printed shell walls," Kazmer told PlasticsToday. “In other words, we are using the part’s interior as its own mold cavity. The key is to compute the shell wall spacing and height so that you get good filling without excessive deflection. Surprisingly, the engineering of molds with respect to flow, deflection, and heat transfer are all relevant to the process planning for injection printing,” said Kazmer. “While the process is backwards compatible with existing 3D printers, the control programs (G-code) for doing the injection printing does require new pre-processors (slicers),” he added.

Most thermoplastics that can be processed via fused filament fabrication (FFF; aka fused deposition modeling) are compatible with injection printing, Kazmer noted. Indeed, Kazmer’s invention reportedly can put more heat into the part so that material welding is greatly improved compared with FFF. “This means that there is a lot of potential to achieve higher strength and more isotropy in heavily filled materials,” Kazmer told PlasticsToday. “The print speed is limited by your ability to melt the material and get the heat out of the part. Typical flow rates are on the order of 4 mm3/sec. I found that most low-end 3D printers can melt about 12 mm3/sec. With a few modifications to the hot end, you can easily deposit 20 mm3/sec," said Kazmer.

PlasticsToday also asked Kazmer how his technique compared with HP’s Multi-Jet Fusion (MJF) and Carbon’s Digital Light Synthesis (DLS) technologies. He conceded that MJF and DLS have higher production rates because they are processing layers in parallel, which he recognizes as a big advantage in terms of production speed. However, injection printing provides a multiplier on production output by filling large interior volumes defined by the printed shell walls, he noted. “As such, injection printing reduces the dimensionality of the problem so that FDM/FFF can better compete. On top of this, injection printing supports a diverse material pallet of thermoplastics with improved properties. For technical and high-volume applications, injection printing is a big enabler,” stressed Kazmer.

ABS-based tensile bars were used to validate the performance of injection printing compared with material extrusion. Image analyses performed on the post-test samples found that injection printing was about three times faster than conventional 3D-printing techniques, and stiffness, strength, and strain-to-failure properties were increased, respectively, by 21, 47, and 35% compared with material extrusion, according to the paper published in Additive Manufacturing.

Kazmer has filed for a patent on the new technology. A summary of the article is available on the Additive Manufacturing website.