Responding to demand for a conformable material that combines heat resistance and durability, Panasonic (Osaka, Japan) has developed a soft and flexible resin that can repeatedly stretch more than 2.5 times its relaxed length and return to its original form without damage. Combined with a transparent electrode material and material paste, also developed by the company, the insulating material made of a thermoset resin augmented by Panasonic's proprietary resin design technology is well suited for wearable devices, among other applications. 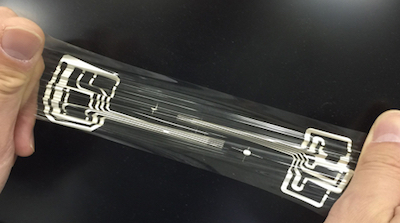 The new material adapts to desired manners of folding and to varying free-form surfaces, according to Panasonic, substantially reducing existing design constraints. Typically, materials that are stretched repeatedly tend to degrade in mechanical strength and recovery performance over time. To prevent this, Panasonic has optimized the three-dimensional cross-linked structure of the thermosetting resin, distributing mechanical stress consistently across a large area. By relaxing the internal stresses that come with repeated stretching, the material can help to realize electronic devices that remain wearable for an extended period of time.

The proprietary resin technology imparts the following properties, according to Panasonic data:

In addition to wearable devices, the material can be used in a range of other applications including sensors, displays and robots, according to Panasonic.

In the wearables sector, in particular, the material may be a game changer, as it shifts the design equation from bulky devices to electronics that are easier to apply to the skin, more like a Band-Aid than a watch. The wearable device market is surging, as we noted in a recent article, "How medtech will—and will not—change in 2016." In 2015, 39.5 million U.S. adults 18 and over used wearable devices, including smartwatches and fitness trackers—an increase of 57.7% over 2014, according to digital marketing company eMarketer. It predicts that growth will continue in 2016 and beyond, with 81.7 million adults using wearables by 2018. The wearable medical device segment of that market is especially robust, reaching a value of more than $41 billion by 2020, according to some estimates.

As noted in the aforementioned article, materials have a unique role to play in the development of medical-related wearables that people will actually wear. Although Panasonic does not make mention of potential medtech applications for its newly developed polymer resin film in its press release, the material's elasticity and softness seem to indicate that it has a solid future in this application area. By combining the stretchy resin with silver to make a conductive paste that could help affix stretchable displays to clothing or skin, "the development could help biosensors and medical monitoring devices become less obtrusive," notes Hilary Brueck in an article in Fortune.