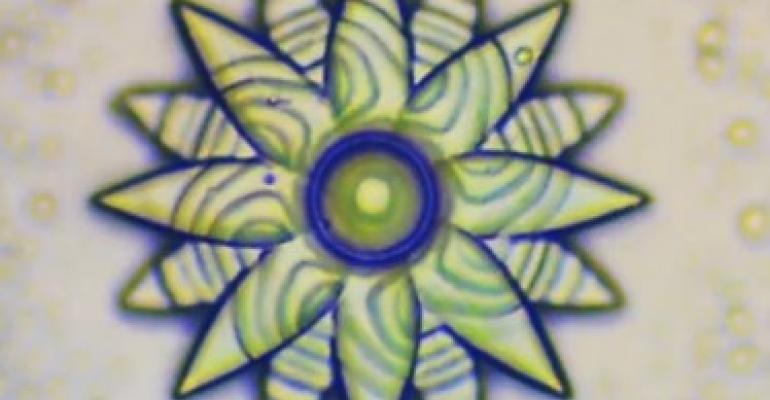 Polymers based on dynamic chemical bonds, which allow changes in material properties during and after production, are a focus at the Netherlands Organisation for Scientific Research in Eindhoven. The materials are being developed for 3D-printing applications, specifically laser sintering.

Polymers based on dynamic chemical bonds, which allow changes in material properties during and after production, are a focus at the Netherlands Organisation for Scientific Research (NWO) in Eindhoven. “Normal polymers are kind of like spaghetti strands that attach because they become entangled with each other,” explained NWO researcher Hans Heuts, who is also Assistant Professor at the Supramolecular Polymer Chemistry research group at Eindhoven University of Technology (TU/e). “We are improving their adhesive strength by adding dynamic bonds. That's when you get what we call Velcro spaghetti. At high temperatures, the Velcro bonds separate and the plastic is liquefied.” The materials are being developed for 3D printing applications, specifically laser sintering.

At TU/e, Heuts and chemist Albert Schenning are immersed in the use of 3D printing for the fabrication of patient-specific prosthetic devices and implants. Schenning also is involved in a “4D-printing” project developing materials that respond to external stimuli such as light. In addition to the universities in Eindhoven and Maastricht, also in the Netherlands, and NWO, the Dynam project includes the participation of materials company DSM, the Brightlands Material Center and Xilloc, a medical device startup that 3D prints implants. Medical applications are also on the minds of Heuts and Schenning as they conduct research at NWO, but the technology has a broader reach.

Laser sintering achieves a high level of precision and, unlike other 3D printing techniques, it does not require a support surface, explained Heuts in a press release published on the TU/e website. “But the result is nowhere near as strong as with injection molding,” he added, which is why he and his colleagues are exploring the potential of “Velcro spaghetti.”

A commercially available polyester supplied by DSM is used as a base material, to which another substance is added to create the dynamic bonds. The lab is currently awaiting delivery of an extruder to see if mixing of the materials can be conducted on a larger scale. "With a bit of luck, we will put our starting materials into the extruder and our new plastic will come out as a liquid," said Heuts. “If this does indeed happen, the step toward commercial use would be greatly simplified.”

Although the materials are being developed for 3D printing, the researchers envision other potential applications. They cite “repairable plastic that flows when you heat it up, and is strong when it cools down. You could therefore repair a breakage by heating up the plastic," explained Heuts. "It is still speculation, but it could be used for repairing wind turbines." Or children’s plastic toys, added Rint Sijbesma, who works alongside Heuts. “You wouldn't have to throw them away whenever a piece breaks."